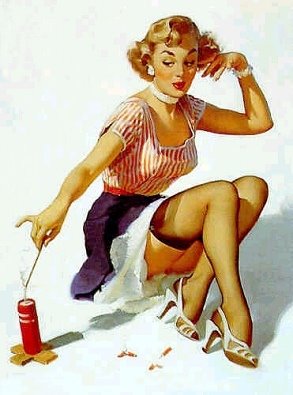 While art has always adored the feminine form, the pin-up made her true debut in the 1900s both in the U.S. and Europe.  Ushered in by exoticism, flappers, the French postcard, Ziegfeld, and the Gibson girl (America’s first centerfold), the pin-up really came into her own mid-century.  The embodiment of life, love, joy, and vitality, the all-American pin-up girl is both alluring and comforting.  By WWII, pin-up art had become mainstream, and came to adorn numerous magazines, dime novel covers, advertisements, promotional products, and, of course, calendars.  But her most important post was bolstering morale in the war effort, when flesh-and-blood pin-ups joined the ranks of the painted.  The advent of ‘nose art’ also made pin-ups larger than life, reminding soldiers of what they were fighting for.

Combat troops, composed mostly of single young men, leaving the strictures of their home society for the first time, and faced with death on a near-daily basis, deserved whatever support a well-turned leg or well-endowed bust could give them.  Although most nose art was never really sanctioned by any commanding officer, social restrictions concerning a girl’s state of undress were considerably relaxed during wartime.  After all, if a fella is risking his life for his country, doesn’t he deserve a good view of that country’s bounty?  Naturally, the further from the states a gent was stationed, the more risqué his plane’s mascot could be.  Censorship was generally only an issue when an aircraft was paraded on the home front, and some rebellious crews still chose to paint ‘Censored’ on their ladies rather than clothes. 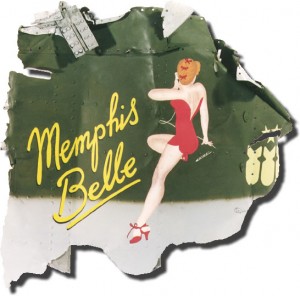 Although not all nose art depicted pin-ups, it all gave its crew a much-needed icon and identity.  As Phil Cohan wrote in his article, “Risque Business,” on the subject of nose art, “At its best, the art is the crew’s expression of self-pride, a release from the anonymity and uniformity of military life, and an antidote to the dehumanization of war.”  The great importance of this very impermanent artform is not only that it gave servicemen something more personal to be a part of, but also that it is a marker with which to identify the past and both the missions that made it, and those that didn’t.

The artists creating these works had to make do with very limited resources and, for the most part, were not professionals.  They were very creative with their available materials and, if they were paid at all, it was usually in goods or alcohol.  Regardless of the work’s quality, though, the most important thing was that it gave the vessel a personality, much in the same way of a captain naming his ship.

Many men were also able to find security in linking the personage of someone well-known in the public eye to their machines, such as Rita Hayworth.  Hayworth’s famous pin-up photo from Life magazine’s August 1941 spread earned her the title of U.S. Navy’s “Red-Head we would Most Like to be Ship-Wrecked with.”  According to legend, photographer Bob Landry had a happy accident when a flashbulb failed to go off, creating a sensous shadow around Rita’s phenomenal figure.

The image of ‘The Love Goddess,’ which was reproduced more times than any other star’s photo in Life magazine, was even pasted on the first test atomic bomb dropped on Bikini Atoll.  Although this knowledge, understandably, weighed heavily on Rita, she said, “I’m proud of that photo.  Not just because the servicemen told me I looked good, but because of what the photo meant to so many of them: a link with home.”

Rita did a great deal more than just pose for the war effort; she was regularly seen helping out in the Hollywood Canteen after a long day’s filming, and worked with the Naval Aid Auxiliary.  Hayworth performed on radio shows and USO shows, signed autographs for soldiers until ‘Hollywood’s most beautiful hands’ must have been tired to the bone, and was even known to give out locks of her hair to some lucky soldiers who had the gumption to ask.  American GIs called their war bond-selling darling the “Number One Glamour Back Home Girl.”

In fact, the only pin-up more popular than Rita Hayworth was fellow actress, Betty Grable.  After releasing a 1942 promotional photo of Miss Grable for Twentieth Century Fox’s upcoming film Pin-Up Girl, the studio began receiving over 20,000 letters a week from servicemen, all requesting her photo.  By the end of the war, 1 in 5 military men owned the iconic photograph, taken by Frank Powolny.  Betty Grable was considered to be the ‘Pin-Up Queen of WWII,’ and the infamous photo was included in Life magazine’s ‘100 Photos that Changed the War.’  Life magazine noted that, “It was more than the sexy picture that enamored them of her; there was a magical wholesomeness and substance they saw beyond the curves of her figure. It was her very essence that was loved.”

Like Evelyn ’$50,000 Treasure Chest’ West and Tempest Storm, Betty Grable had what she considered her best assets insured with Lloyd’s of London, but for her this translated to ‘Million Dollar Legs.’  With measurements of 18.5” thigh, 12”calf, and 7.5” ankle, hosiery specialists and Hollywood alike touted her legs as the most beautiful and ideal.  Rumor has it that a young serviceman by the name of Hugh Hefner even considered her iconic pin-up pose to be his primary inspiration for founding Playboy.

To all the men and women who have served, and those who have done their best to serve those serving, Thank You.