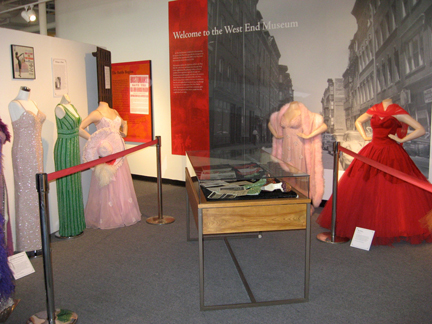 Thanks to Miss Mina Murray, Headmistress of the Boston Academy of Burlesque Education, we found out about an amazing burlesque costume exhibit going on now in Boston!  We’ve got all the info from her right here, and even if you can’t make it to Boston to see it for yourself, she’s provided some lovely photographs so that our readers can enjoy the exhibit right here on the pages of Pin Curl!

How did this exhibit come about?

Since 2008, there’s been a costume exhibit at The Great Burlesque Exposition.  Scratch, the conference organizer, is always on the look-out for ways to educate the mainstream populace about burlesque and to promote burlesque to the general public.

In 2010, plans were made to open a small, permanent museum dedicated to Boston’s West End, a neighborhood which was destroyed as part of a massive urban renewal program in the early 1960s.  The West End included Scollay Square, which was the center of burlesque in the city and home to several theatres, nightclubs, supper clubs, and hotels popular with burlesque performers.

Scratch reached out to the museum about hosting an expanded, and more Boston-centric, version of the exhibit from The Great Burlesque Exposition after the Expo closed.  The executive director is a big fan of burlesque and it just took a little while to get approval from their board of directors, arrange the loan of the costumes, and – of course – raise the money to mount the exhibit. 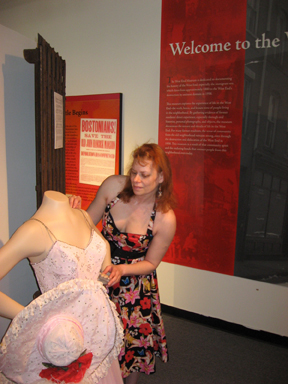 What advice you have for burlesque history supporters that might wish to promote their own cities’ burly-q history?

Start with the library and the local historical society.  Check in with your chamber of commerce.  If there are organizations dedicated to historical preservation, especially of old theaters, reach out to them.  If there’s a local university or college, see what they have in their collections.  If you’re lucky enough to have someone who performed locally back in the day, by all means, talk to them.

We were lucky in Boston. There are a couple of noteworthy burlesque performers associated with the city.  One of them is still alive, and living in Florida; the other one has a niece who is a friend of Scratch’s.  Boston was also the home of Jess Mack, who was a major producer and promoter, and his papers and effects were left to a library in Las Vegas.

Is there anything that you would like to add about the exhibit?

The exhibit would not have been possible without a lot of help: first, all the groundwork done by Scratch. He came up with the idea, negotiated with the museum, did the initial contact with the costume owners, and very importantly, acquired all the mannequins we needed.

Betty Sioux Tailor, a burlesque performer and costumer from Rhode Island, not only curated the exhibit at The Great Burlesque Exposotion, but loaned her artist’s eye and MacGyver-like jury-rigging expertise to setting up the museum exhibit.  We needed a special mannequin to accommodate the tiny corseted waist on Dita’s costume and Betty Sioux built one!

There was a Kickstarter campaign to help pay for things like insuring the costumes and shipping them (not to mention all those mannequins). We had a lot of support, but I’d like to single out The Burlesque Hall of Fame, Miss Kitty Baby, and Lee & Susan Weiner for their particularly generous donations.

The core of the exhibit was the costumes:

l There is no burlesque performer more tied to Boston than Ann Corio, the Queen of the Old Howard. We were fortunate that a number of costumes that Miss Corio wore in her burlesque revival show, This Was Burlesque (which had its try-outs in Boston before opening in New York) still survive. Those half dozen costumes became the centerpiece of the exhibit.

l Boston native Lily Ann Rose began performing in burlesque as a teenager just after WWII. She started as a chorus girl at The Casino in Scollay Square and soon became the protegee of Sally Keith, Queen of the Tassels, at the Crawford House. After her retirement and marriage, she kept her career a secret from her family for more than 40 years.  She has just one costume left from those days and we’re so pleased to be able to display it.

l We were also extremely fortunate that Dita Von Teese was willing to lend one of her amazing costumes. Although the costume stands on its own merits, Dita has some ties to the Boston area. She was a performer and Mistress of Ceremonies at the annual B & D Ball, held at the now vanished Goth nightclub ManRay (like the burlesque theatres of old, a victim of urban renewal).

l Miss Exotic World 2008, Angie Pontani is not only an amazing performer, she’s also a talented costumer in her own right. She provided the costume she made and wore for her farewell performance at the Burlesque Hall of Fame in 2009. The costume is lovely on a mannequin, but it should be seen in action to really be appreciated.

l April March, The First Lady of Burlesque, loaned an entire costume set which was made for her by designer Simon Sorr. It consists of a robe, gown, bra, garter belt, panties & g-string. This costume is paired with a reproduction that I made myself for the first tribute act to April March. There’s more information about the costume on my website: http://minamurray.com/tribute.cfm

Besides the costumes we are also displaying some burlesque ephemera that comes from the personal collection I share with Scratch. We have a lot of This Was Burlesque memorabilia: programs, souvenir pictures, the book Ann Corio wrote, and the “How to Strip for Your Husband” record. Even more precious are the items from the Old Howard: some fragile programs and a couple of rare photographs of show in progress. 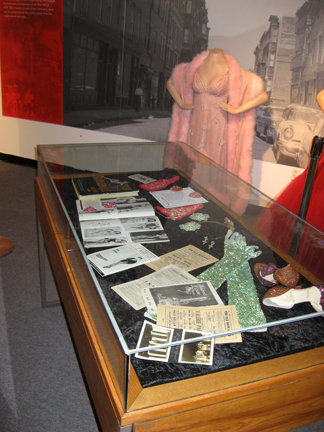 Can you tell us a little bit about Boston burlesque, then and now?

Just a few blocks from The West End Museum, at the Government Center train station is a bronze plaque which marks the site of The Howard Athenaeum, called “The Old Howard,” Boston’s premier burlesque palace.  It is all that remains of Boston’s scandalous Scollay Square.  Boston was home to Jess Mack, a comedian turned powerful burlesque producer, and was the seat of The Eastern Burlesque Circuit, a multi-state conglomeration of burlesque theatres run by Frank Bryan and Frank Engels.  In1956, Bryan-Engels signed a 10-year contract with Tempest Storm for $100,000.00 per year, making her one of the highest paid women in America in any profession.

The days of six-figure salaries for burlesque performers are gone, but Boston remains an influential city in the world of burlesque. In 2000, The Burlesque Revival Association was founded in Boston and, while it didn’t last long, it helped pave the way for the other burlesque performers and troupes that followed after. Today, Boston is home to several venues that include burlesque alongside bands, plays, and D.J.s.: Oberon in Harvard Square; The Coolidge Corner Theatre in Brookline; and The Davis Square Theatre in Somerville have all hosted burlesque events in the past year.

Boston plays host to many burlesque troupes and performers.  The leading troupe, The Boston Babydolls, are perennial features on “Best Of…” lists, and produce large theatricals and a monthly revue.   Two major annual events call the Boston area home: The Great Burlesque Exposition,which takes place each spring in Cambridge, and The Boston Burlesque Marathon,an overnight showcase of 100 performances each November in Brookline.

And what about Miss Mina herself?

I’m one of the founders of The Boston Babydolls Burlesque Troupe and Headmistress of The Boston Academy of Burlesque Education (B.A.B.E.). I’m a dedicated scholar of burlesque history and collector of memorabilia. I blog about my experiences in burlesque at missminamurray.wordpress.com. Before I got involved in burlesque I received a Master’s degree in archaeology from Brown and a Certificate in Museum Studies at Harvard. I’m also an award-winning costumer and was an embroiderer on a recreation of a 17th century lady’s jacket at Plimoth Plantation (how’s that for eclectic?). Museum work has always been a dream of mine, and this exhibit – combining my passions for burlesque, costuming, and history – was a perfect fit … so to speak!