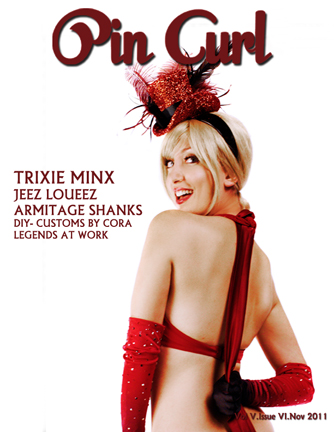 After reading up on you a bit, I found it very interesting that your burlesque career was partially shaped by the events of both 9/11 and Hurricane Katrina. Would you please share with us the impact those happenings had on your life?
As strange as it sounds both these events greatly shaped the direction of my life. I think most people reassess their lives after witnessing or enduring a major disaster. Prior to September 11th I was a ballerina and most of my goals pertained to achieving a specific body type and dance technique. Watching the towers fall on TV and learning that my husband lost a family member it just sort of struck me that my goals, while important to me at the time, weren’t really what mattered most in my life. It became very clear that life is precious and short and I didn’t want waste another moment on anything trivial. I had battled with anorexia & bulimia and this was the catalyst to get serious about getting better. I spent the following months becoming the person I wanted to be rather than destroying the one I was. I decided not to pursue ballet and began training to be a Pilates instructor. I traveled to different countries for the first time and spent a lot more time hanging out with friends. It was a year or two later I started dancing again but for the pure joy of performance/movement rather than anything else.
I was in New Orleans for Katrina and left on the day the levees broke. Once again I coped with this experience through internal reflection. I was living a healthy happy life but wasn’t actively pursuing any creative endeavors which I think had a lot to do with my fear of slipping back into anorexic/bulimic behavior. I remember thinking of all the things I never did in New Orleans because I was too busy, it was too expensive, or I was simply just scared. Katrina made me realize that not only is life precious but so is this world so enjoy EVERY opportunity, experience, moment you have. I moved back in October 2005 and my character Trixie Minx was born.

When did you first begin training in ballet and for how long did you pursue it? Do you have experience in other styles of dance or other arts like theater or music?
My first class was a creative movement dance class. I was 2 and a half; my mom lied and said I was 3 because I wanted to dance so much. I was what ya call a “bun head”, obsessed with Ballet. I learned several styles of dance like modern, jazz, character but never loved them the same as ballet. It wasn’t until I moved to New Orleans and joined the Komenka Ethnic Dance ensemble that I really started enjoying other techniques like tango, swing, African, etc. My experiences with theater & music didn’t really develop until I moved to New Orleans as well. But… I do come from a crazy artistic family. My dad plays piano/guitar, my mom is an excellent visual artist, my sister is a musical theater actress, & my brother makes films. I think I got the dancing gene from my Grandma. She taught tap & piano when she was younger and currently directly her own dance group; they even have a retired rockette!
From what I’ve read you were originally very hesitant to perform burlesque. Can you tell us why you felt that way and what it took to change your mind?
The first time I saw burlesque it was a clip from a documentary about the Suicide Girls. Before everyone gets fussy, I sincerely support the idea behind the group and have a couple awesome friends that model for them but, what I saw on TV seemed more like soft core porn than performance. I assumed all burlesque was like that. I later went to see a live show and while it was definitely a step up in the performance department it was a very bare bones show. The girls took off clothes to different music but there was no theme, no props, no lighting. It wasn’t until I saw the Moulin Rouge in Paris that I realized that burlesque could be realized as a full scale production like a classical ballet or Broadway musical. What they did wasn’t traditional bump & grind but they were beautiful dancers in amazing costumes on a professional stage. They were almost completely nude but it was never raunchy; the whole show was a celebration of different women and everything they embodied. This show made me realize there are no rules or limits to burlesque and it can be performed many different ways.

In addition to performing, you’re the producer and artistic director of Fleur de Tease, a New Orleans-based performance troupe. When did you start FDT and how has it evolved over the years?
I started Fleur de Tease the summer of 2006 and we had our first show at One Eyed Jacks (formerly the Shim Sham) in September that year. I remember our first show in a very positive light but it has definitely improved over the years. Our earlier shows were great but didn’t have a lot of definition beyond pure entertainment. We started by incorporating holiday themes and later expanded on that by designing our own theme shows. Two years ago we started doing full length story productions, like Alice in Wonderland and our adaptation of the Wizard of OZ. But it has been our collaborations which are the current highlight in our performance history. We work with several bands and were able to create a Prince themed show with one of the groups that was spectacular. I LOVE Fleur de Tease! I love all the cast members, our venue, our partners in crime; the whole experience has been awesome.
Do you consider yourself to be neo or classic? Why?
Neither and both? My character has several different personalities depending on which production I’m performing in. With Burlesque Ballroom & Creole Sweet Tease (two other shows I organize) it is definitely traditional bump and grind with fantastic New Orleans musicians. However with Fleur de Tease I perform mostly comedic strip tease, and while it is not the extreme end of the neo burlesque scale it definitely isn’t classic.
I also perform as a clown with a couple bands/groups which is an entirely different yet complimentary part of my character too. I often feel like a clown who performs burlesque rather than the other way around.
I’d like to know your creative process when developing a new act.
For me it starts with inspiration in something. It can be anything like a song, an experience, a joke, most recently it was tortoise, but no matter what it is, it becomes the driving force for the act. I tend to pull towards OCD behavior so whatever I’m working with plays in a loop in my mind. I tend to lock myself in a room or a studio and just play a song on repeat while I work movement out in front of a mirror. Dance is the easy part but I’m weak at costuming/props which is where I’m lucky to have a great group of friends that are able to help. The last part is stage time. I believe that while you need to rehearse, you truly develop an act in front of a live audience. It is their reaction and behavior that is better feedback than any video could be.

You also produce a weekly show called Burlesque Ballroom, right? How does that differ from your FDT shows? (I’m asking from both an audience perspective as well as how your roles/involvement change(s) with each show.)
I produce Burlesque Ballroom in addition to Fleur de Tease which definitely keeps me busy. The shows are very different. Fleur de Tease is a Vaudeville inspired Burlesque Revue with a full time cast and lots of variety acts. Burlesque Ballroom is a modern spin on a classic 1960’s Bourbon Street Burlesque Show with a rotating cast of soloists all performing classic strip tease to live music. Ballroom is a very cool show on a historical level too. It’s bringing quality jazz & burlesque back to its original home (at least during the 50’s & 60’s) on Bourbon Street. And this weekly show is entirely FREE which encourages a lot of people to check it out who might not otherwise seek out burlesque on their own.
Can you tell us about the New Orleans Bingo! Show?
The New Orleans Bingo! Show is a curious rock’n’roll spectacle of theater, clowning, music, dance, and of course BINGO! It really is hard to describe but very easy to enjoy. I’ve been a member for 2 years but Fleur de Tease has worked with the band on specific projects since 2007. Rather than try to put it in words I suggest ya’ll check us out online here: www.neworleansbingoshow.com
What’s next for Trixie Minx?
I definitely want to perform as long as I can though I’m not sure what will happen after that. I have a lot of ideas and plans in the works but I don’t want to jinx anything so for now let’s say… hopefully a LOT more.