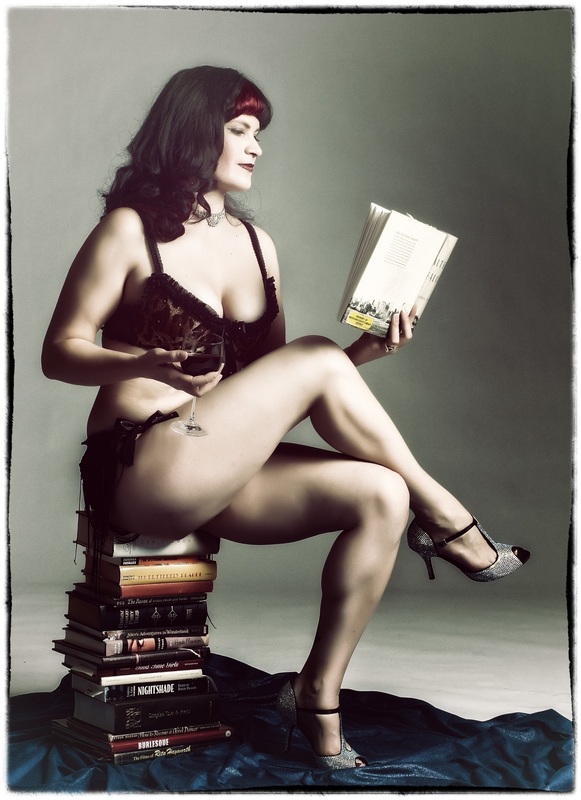 Having performed as both a bellydance and burlesque performer, I’ve been asked many times how they are similar or different. I always answer the same: They are like sisters. Both share many common American histories and are commonly misunderstood by the general public. Both use similar dance moves. However, like sisters, they are not the same art forms and because of the differences there can be a fair amount of rivalry between the two.

I would like to make a few things clear out front. I speak in generalizations about the American traditions of these dances. Every performer’s path may look a little different. When I refer to “Bellydance”, I refer to the dance as a whole including cabaret, tribal, folk and fusion (just to name a few). When I refer to “Burlesque”, I refer not to the dictionary definition “a literary or dramatic work that seeks to ridicule by means of grotesque exaggeration or comic imitation”, but rather refer to the striptease dancers who have become synonymous with the term today.

No matter how far the two try to escape each other or how far back into history they look to prove they are not related, there is one event both look back to when reviewing their roots: The Chicago World’s Fair in 1893. At this turn of the century event where such modern marvels as the Ferris Wheel made its debut, Sol Bloom found a money maker in the Midway’s ‘Streets of Cairo’ exhibit. There were dancers there who undulated in ways that were exotic and, to the Victorian principles of the time, downright improper! Bloom coined the term “Dance du Ventre” (French for Belly Dance) at a time when speaking of such parts of the body was scandalous, knowing full well this would rake in the cash. Whether she was one person or many, (that’s a whole different argument) the name that people still speak of today is Little Egypt.

Little Egypt is attributed with beginning two new forms of dances in America, “Dance du Ventre” and its dirty little sister, “Hootchie-Cootchie”. In a time when seeing a flash of ankle was titillating, these dances showcased women who wore no corsets and sensully undulated their bodies to exotic music. You can bet the men were lining up to watch the show while the prudes were working hard to suppress it. You can also bet that men like Sol Bloom were taking full advantage of the spectacle and finding girls willing to do a little more– willing to tease  and peel off clothing for those who paid to get in. These crude strippers draw a historical line in the sand between these sisters of dance. 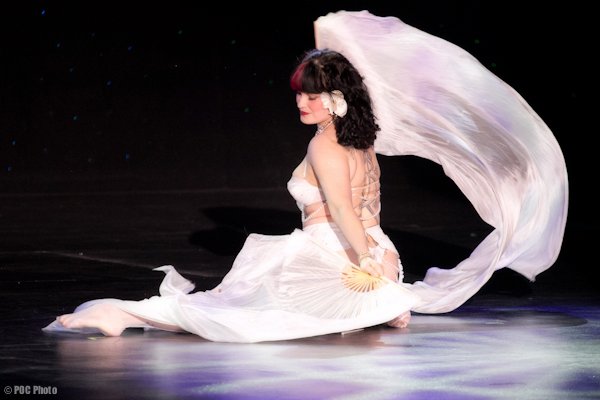 Bellydance, as it is known here in America, is in fact an American art form. As Bellydance developed and grew as an art form over the next 100 years, she has looked always back to Little Egypt, the Orientalist ideal and/or the Middle East itself for inspiration and guidance. Her costumes have mimicked the beautiful and exotic clothing of Orientalist paintings. Her sensuality of movement, the isolations and the shimmies have been developed and grown to many different styles of bellydance. Some forms pulling from tribal dances and others from night clubs; she is the American ideal of many countries, mostly in the Middle East. She is respectable and beautiful in her many facets and always sensually feminine.

Today there are many who see the art of Bellydance as a Spiritual. Digging farther into the past to further separate and distinguish themselves from that naughty sister, they look at bellydance as a gathering of tribal women, social dancing and follow the travels of the Romany. As far back as history will allow us to look, there seems to have always been some form of dance that can be pulled into today’s Bellydance.

There are many who see to the Algerian Tent at the World’s Fair as the real thing and see the Hootchie-Coochie as a bastardization of that true art form. As recent as a decade ago, Bellydance sought to completely disown Burlesque.

Burlesque, also an American art form, takes its historical beginning with Lydia and the British Blondes in 1868, 25 years before the World’s Fair. These ladies were a risqué sensation for their Burlesque (dictionary definition) of modern views of women’s dress. They had the gall to come on stage in knee length skirts with flesh tones tights and bare shoulders! Just imagine what a modern day ballerina would look like viewed through this lens… As the audience began to accept such skin on stage as normal, the producers had to fight each other for a more daring show. Competition was fierce and so began the “tableau”, the “striptease” and ultimately the basic Burlesque costume necessity: pasties and a g-string.

But it’s not just these little costume pieces that set the two sisters apart. Burlesque followed in the footsteps of the French Bohemian Revolution, Broadway productions and Hollywood Glam. She stepped out of the dusty “Cootchie” tent and into a pair of sparkling Stilettos. Sensuality came from the art of the tease, not necessarily the flesh underneath. The talent lays in the ability to make the audience excited about seeing a flash of thigh when ladies’ dresses where getting shorter and shorter. The undulations of bellydance became a novelty act, the basic dance move now was the “Bump and Grind”. Other than the Shimmy, there was nothing left of Little Egypt on a burlesque stage. 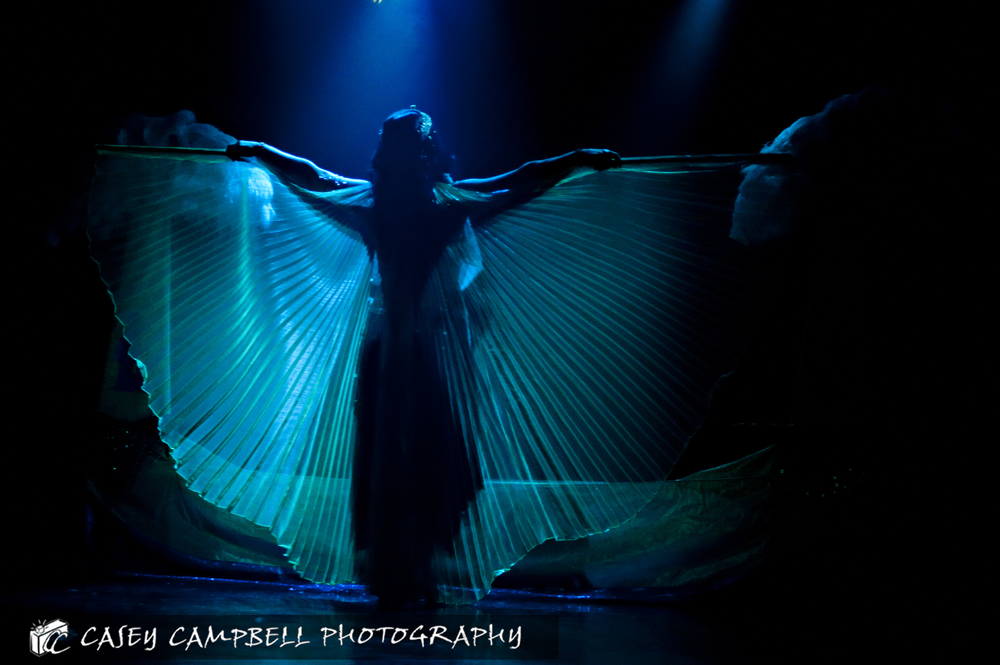 In the new era of Neo (Burlesque and Bellydance), the fusions of other styles of dance and costume have brought their paths closer together again. In recent years I have seen a new conversation sparked between the sisters and bellydancers performing in burlesque shows (and vice versa). The Neo movement is, for both art forms, a nostalgic look at the history of their dance while moving forward with the positive outlook of creativity and Sisterhood. Both sisters are still fighting the misunderstood notion of what they do, but I see less of that fighting with each other.

I have watched these sisters from both sides, have seen the spats and name-calling, the inability to value and understand what the other has brought to the table. Historically speaking, dancers were considered a lesser class who were exploited and exploiting women and sexuality. The sisters fight the common misconceptions of what they are today because of a viewpoint of what they were sold as yesterday. Today, I see more teachers of both art forms who strive to empower women to accept the bodies they have, fight stereotypes of what their dances represent and, most importantly, enjoy life. In the past 4 years, more than ever, I have seen these sisters sharing costuming ideas, dance moves and friendships. They are different art forms, but they no longer have to shun the other. Now they can walk the path alongside each other.

Both Bellydance and Burlesque have grown to something bigger than where they started and both are empowering women do something that fulfills their passion and have ended up with a community where women (and men) are supported and appreciated. I know there will always be differences, but I for one am happy to see them embrace the sisterhood they share and respect one another for those differences.

*Originally printed in “From the Hip” a Pacific Northwest Bellydance Magazine-Permission fully given from publisher to republish.