Shalom! It’s December, which means it’s Hanukkah time! We, The Schlep Sisters, Minnie Tonka and Darlinda Just Darlinda, are thrilled to share our secret Hanukkah recipes, crafts, and tips on how to help enhance your holiday season! Whether you’re a yeshiva bocher, an honorary Jew, or a bacon-loving Heeb, The Schlep Sisters Hanukkah Guide will titillate and inspire your holiday spirit. Come join us in the festivities!

Before we get started, we’d like to give you a brief overview of Hanukkah: Hanukkah commemorates the victory of the Jews over the Syrian Greeks in 164 B.C.E., and is celebrated by lighting a menorah (candelabra), for eight days, eating oily foods such as latkes (potato pancakes), and playing Dreidel (spinning top).

In a large pitcher, combine the Manischewitz, Slivovitz, orange juice, and soda. Stir.

Add fruit. Next, pour in the Prosecco and stir. Serve as is or on ice.

The Whirling Dreidel will have your head spinning and it’s a sure hangover; but, 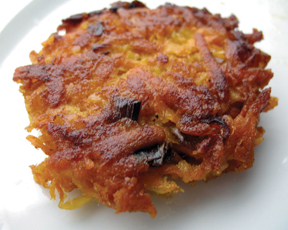 Makes about 25 potato pancakes in about 45 minutes

Stir together potatoes, onion, flour, eggs, salt, and pepper. Heat oil in a deep 12-inch nonstick skillet over moderately high heat until hot but not smoking. Working in batches of 4, spoon 1/8 cup potato mixture per latke into oil and flatten to 3-inch diameter with a slotted spatula. Reduce heat to moderate and cook until golden, about 1 ½ minutes on each side. Transfer latkes with spatula to paper towels to drain.

Place all ingredients in a heavy saucepan and cover. Cook on medium-low heat until fruit is soft and starts to break down, about 12 to 14 minutes. Uncover and cook over medium-high heat until mixture thickens, about 5 minutes. Purée in a blender or food processor. If you like a chunkier saucy sauce, skip this step. Makes about 2 cups. Serve warm or at room temperature with Lusty Latkes.

Strip Dreidel with The Schlep Sisters!

We’ve got an exciting new spin (pun intended) that combines strip teasing and the ancient Jewish game of spin the Dreidel — yep, you guessed it — Strip Dreidel!

The History of the Dreidel

The Hebrew word for Dreidel is sevivon, a spinning top. Dreidels have four Hebrew letters on them, which stand for the saying, “Nes gadol haya sham,” translating to “A great miracle happened there.”

While the Maccabees’ victory is viewed as a miracle in itself, the eight days of Hanukkah celebrate another miracle. In order to rededicate the temple after it had been desecrated, the menorah needed to be lit. However, there was only enough oil to light the menorah for one night. Supplies were scarce in and around Jerusalem after the war and it would take several days to bring more oil to the temple. The miracle of Hanukkah was that the small amount of oil found burned for eight days until more oil arrived. That is why Hanukkah is also called The Festival of Lights.

So, now you’ve got the history…a smart stripper is a successful stripper!

– A minimum of four players

– Lots of clothes. We recommend gathering up clothes that you’d like to donate and ask players to donate part or all of their winnings to tzedakah (charity). Look up your local donation centers.

1. Make a large batch of The Whirling Driedel, The Schlep Sisters signature Hanukkah cocktail (see recipe on page above)

2. Start with as many clothes on as possible, it will make the game last longer and you’ll have more clothing to donate at the end of the night!

3. Each person adds some clothing to the communal pile.

4. There are four sides of the dreidel, from right: nun, gimmel, hey, and shin, take turns spinning the dreidel and when it lands on . . .

ה (Hay Yiddish for “Half”) – Take half of the clothing from the communal pile, another player(s), or some combination of the above.

ג (Gimmel Yiddish for “Everything”) – Claim everything from the communal pile of clothing.

ש (Shin Yiddish for “put in”) – Strip off 2 pieces of clothing and add to the communal pile.

5. Game lasts until everyone is naked or all participants are too drunk on The Whirling Driedel! Remember to also drink lots of water and eat the Lusty Latkes (The Schlep Sisters latke recipe) beforehand.

6. Whoever ends up with the most clothing is responsible for organizing the clothing donation!

If you’re in NYC, be sure to check out our 5thAnnual Menorah Horah Hanukkah show on Saturday, December 17, 2011 at the Highline Ballroom! 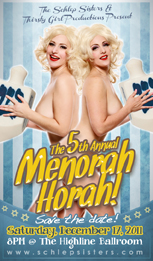 The Schlep Sisters are burlesque performers of the Jewish persuasion! Minnie Tonka and Darlinda Just Darlinda are long lost sisters who found each other while tracing the roots of Yiddish Theater and Vaudeville on the Lower East Side. Inspired by Manischewitz, the Barry Sisters, and Rock n’ Roll these ladies can cut a rug! They’ve been livin’ it up on stage together and captivating audiences across North America since 2004. From the New York and Toronto Burlesque Festivals to the Burlesque Hall of Fame in Las Vegas to the Key West Burlesque Holiday Extravaganza, and the USA’s Premier National Touring Burlesque Troupe, Dangerous Curves Ahead: Burlesque on the Go-Go!, these sassy sisters have so much love they schlep it all over the country! To keep up with The Schlep Sisters visit, www.schlepsisters.com.