Censorship and art is an age old battle. Toss in some sex and lowbrow entertainment, and you’ve got a mixture ready to explode. While many blue laws are still on the books across the country, they are often ignored or loosely enforced. But if your art pisses off the right people, you might find old laws enacted on, so it’s best to have a working knowledge of the vice laws that were and are still on your books – even if the last time they were dusted off was to make this delightful “Guide for Strip-teasers” starring Bettie Page in a 1953 edition of Carnival magazine detailing clothing restrictions by state. 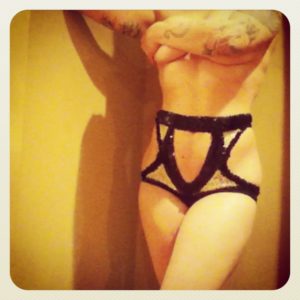 In my performing state of Tennessee, any venue that has a license to serve beer or alcohol must not allow persons “to expose to view any portion of the female breast below the top of the areola.” or “any portion of the pubic hair, anus, cleft of the buttocks, vortex, vulva or genitals.” In case that’s unclear, make diamond shape with your thumbs and your forefingers, now use that to frame where your ass and your legs meet. Ta da! You’ve just found your vortex. Now go forth and use your vortex powers for good. Or evil, you know, whatever.

Though written directly about the sale of alcohol (something we as producers and performers take no part in) our law is written intentionally vague. So what, weird, vaguely written laws that prohibit sexual and especially female sexuality, that’s nothing new. What has us actually paying attention to the ridiculously outdated laws is that in 2006 our alcohol board fined a local 21 and up bar after an agent saw a pastie shot in a local paper. Ever since, the titties you see in Tennessee are literally only half the reveal.

Close by in Knoxville, TN, Kisa von Teasa, performer and producer with Salome Cabaret says, “So far none [of the laws] have been enforced for us as burlesque performers. However, we have had a local drag performer be fined for underboob. As of right now, Salome flies under the radar and we all practice our art form with a healthy dose of paranoia.” She adds that most of their restrictions are based on the state liquor board, but there are a few local ordinance holdovers from the fetish scene in the early 90’s.

In Richmond, Virginia, the laws related to alcohol are even more specific. Deanna Danger, who performs and produces there, says ABC laws dictate, “No ‘nudity’, meaning no less than nips, under and side boob covered, no thongs, all vag and pooper area covered, and no stripping off of any clothing while visible on stage.” She notes, but adds that certain venues, like art galleries, theaters and museums allow stripping to pasties and thongs, but simulated or real sex acts are forbidden. She adds that, “some theaters will allow full nudity if okayed in advance. Can strip tease in bars to appropriate coverage level if not stripping clothing – so say stripping off jewelry or hair…non ‘clothing’ items, reverse striptease, or stripping behind screen out of view.”

Of course, laws change not only state to state, but county to county, and city to city. If you perform in Memphis, TN, you’re welcome to wear a thong and pasties in a liquor serving venue (due to a city ordinance), but in Nashville and Knoxville your venue will be held in violation of state liquor laws. These laws apply to only female breasts; men are welcome to go topless. The vortex rules do apply to both sexes, as do the simulated sex act restrictions.

The fear of abiding by outdated laws extends not to just costuming, but to choreography as well. Kisa explains, “Since Knoxville also has laws regarding where and how one can touch themselves I have to practice two different sets of choreography. It goes so far as to not allow any suggestion of sex acts so the simple move of removing the glove with your teeth, holding in one hand and stroking it with other is actually not legal on our stage.”

GiGi LaFemme, a former New Yorker turned Nashville performer, has toured with Dangerous Curves Ahead across the country, and says when she first came through Tennessee, “I was slated to perform my Spanking act in Nashville. Crap. It is an act where I spank myself silly, lick my paddle and wear…well, not much at all. Double crap… [I decided] I wasn’t going to complain anymore about these stupid laws. I was gonna make fun of it. The next night, I bound myself up in my underbra and bloomers and put the usual costume on right over it. I’m telling you…black thongs over nude control top underwear are going to be a trend one day!”

Now a Nashville resident of two and half years, GiGi says, “Man, I was so angsty trying to adapt existing acts and wondering how the hell I was going to make these garments look sexy. Because I am a voluptuous gal, it wasn’t so easy for me to put tape under my breasts (ew!) or just wear slightly bigger underwear. I have an ass. It moves and I can’t help it… [I eventually] stuck with high waist panties. I left the front fairly simple, but cut out holes on each cheek, while making sure all the proclaimed naughty bits were covered. In fact, this idea was inspired by Prince’s infamous yellow, ‘ass-less’ suit worn on the VMA’s in 1991.

“It made me feel like if I applied just a little more elbow grease and thought outside the box, that I could turn this around. It felt like a pain, at first, to make more costume pieces for acts I thought were pretty complete. Though in the end, I’m glad I pushed myself. I really like having options and feel my arsenal is even more equipped for different occasions.”

We’re big fans of GiGi’s cut-out panties, harnesses, cage panties, and other costuming that remains compliant but still looks interesting and sexy on stage. Shan de Leers, my troupe mate at Music City Burlesque, even created a detachable modesty panel that she can snap into place over her fringe thong for an act.

The best way to know what’s actually being enforced is to ask the producer of the local show you’re performing in. If you’re traveling as a troupe and booking your own shows, ask local performers about ordinances. Sometimes the books are different than what’s enforced.

Kisa adds, “When looking to book in the South always pack some duct tape, to cover that underboob and spare pair of full coverage panties that won’t look dumb with your costumes. We are not the only state that has to operate with Boston Rules and you never know if and why a venue might panic and you need to cover up. Panicked venue owners happen everywhere.”

GiGi notes that chain stores can, “Literally rescue your ass and they’re usually open late. They have decent undergarments in basic colors, are cheap and will do in a pinch.”

And if, like in Richmond, you need to skirt the laws, as opposed to playing to them, Deanna Danger says, “We primarily stick to theaters, galleries, museums and rarely do shows elsewhere. It cuts down the number of venue options and how many shows we can actually support in a month.” Her advice to touring burlesquers is to, “always bring extra coverage, especially in the south!”

In Tennessee, you can similarly bare your bits as long as there is no liquor or beer license in your venue. In Nashville, we tout these shows, which are usually at smaller venues, as “uncensored.” In Knoxville, the laws are even looser, allowing theaters to allow nudity if it’s artistically justified, which is, as you would imagine, up to the local boards to decide.

The bottom line (puns always intended), is to ask the local performers and producers, bring costume adaptations or alternate acts, and be flexible.

I think all of us covered up dames agree with GiGi when she says, “While I perform and have willingly adapted to the laws here in Tennessee, I certainly don’t agree with them… I’m optimistic change will occur, but it’s a battle held in place by prehistoric mandates and red tape. The bottom line is I just want to perform. At the end of the day, it’s not about how much you show…it is how you rock it and learn how to make it work for you.”