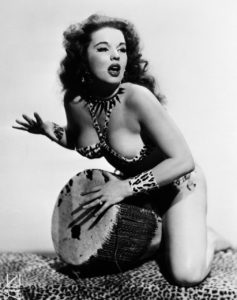 Blaze Starr was born April 10, 1932 in rural West Virginia.  She grew up poor in a “time when girls married at 14 or 15”.  By the time she went off to pursue burlesque dancing at 16 she was “considered an old maid”. She became the headliner at the 2 o’ Clock Club in Baltimore, a club she would later purchase.   The late 1950’s found her on Bourbon Street where she started her legendary affair with Governor Earl Long (who she cheated on with President Kennedy), Long ended up involuntarily committed to a “mental health facility” until his death.

Known for her comedic acts such as her exploding couch routine, she landed herself firmly in the heart of burlesque history and achieved a sort of mainstream B celebrity status with the films Blaze Starr Goes Nudist (1962), and the film based on her story, Blaze (1989) which starred Paul Newman.  She retired from stripping for good in 1983, to become a gemologist and create hand crafted jewelry to sell at a local mall.

Blaze died in her home in West Virginia on June 15, 2015 of a heart condition.  The love of her life, her dog, passed just hours later.  Her legend lives on through her biography, Blaze Starr: My Life as Told to Huey Perry (1974), and through her costume exhibits at The Burlesque Hall of Fame in Las Vegas.