You’re the founder of Dr. Sketchy’s Anti-Art School, which now has more than 100 drawing salons throughout the world. Exactly how many Dr. Sketchy’s schools are there at current count? What first gave you the idea to mix cabaret/burlesque with art and drinking games, and did you ever imagine it would grow to the extent that it has?

Right now there are 130 Dr. Sketchy’s making trouble around the world.  When I thought up the idea as a broke art school dropout and former artists model, I wanted to fuse my passions for drawing and burlesque, but I had no idea that it would ever grow into this giant art octopus.  We’re on 5 continents, in cities from Akron to Zagreb, and have done everything from illegal flashmobs to parties at the Museum of Modern Art.

I’m very interested in one of your current projects, called “Molly Crabapple’s Week in Hell,” in which you plan to lock yourself inside a rented room for 5 days, completely cover the walls in paper and subsequently cover all the paper with your art. The entire process will be documented by photographer Steve Prue and the resulting materials will become a book of the same name. You’ve stated that your goal is to leave your studio and comfort zone and test your limits as an artist. What expectations do you have of this event?

I’m turning 28 in a few months, and wanted to kind of say goodbye to a period in my career.  I didn’t have a particularly easy start to my career, and I got a lot of blowback, both for being a young woman and for having worked in the naked girl industry.  It left me with sort of a chip on my shoulder.  I wanted to do something hard and definitive to say goodbye to that. I was talking with Warren Ellis, and had conceived of a very art wanky impossible to fund project, when he said “No.  Just rent a room.  Cover it in paper.  Fill it with art.”  So that’s what I’m doing.  I don’t know what will happen, except the sort of divine mindlessness you get when you draw way too much. 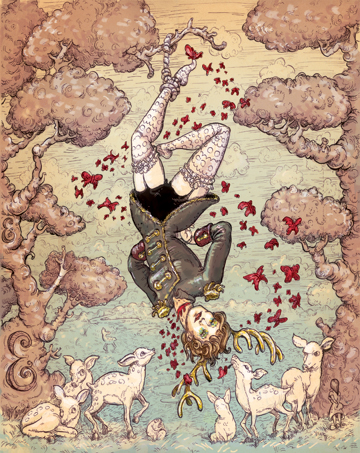 You recently spoke at a panel about women, muses and paintings at the Brooklyn Museum. You mentioned that your favorite work, Olympia by Manet, would likely be the focus of your discussion. I’d love to hear about your thoughts on the piece and why it’s your favorite.

Olympia is fuck-you confrontation in a pearly pink package.  The painting is of a famous courtesan, lying there, surrounded by her servant and all the luxury her business has earned her, staring at the viewer with these cold, impermeable eyes.  “I dare you to judge me.”  It was rejected from the Salon, and the reason why was that the guys visiting it would have slept with her, and there she’d be, looking at them hard from the canvas.

You learned to draw in a bookstore in Paris. I’d like to know more about that experience and how you ended up there.

When I was 17, I was lucky enough to take off for Europe, and stumbled across Shakespeare and Company bookstore.  The legendary owner, George Whitman, saw me sketching outside and invited me to live there, along with the Tumbleweeds, a ragged, international group of poets and musicians that slept on the velvet covered couches.  It was one of the finest times of my life.  Seeing a grandly generous art endeavor like that last 50+ years (in fact, it’s still around, under the leadership of his daughter Sylvia), is deeply fucking inspiring.

You appear to be fascinated by Victorian and Rococo fashions, and you mention that artifice is your favorite subject. Tell us about your feelings on those topics and the notion of beauty as a mask.

I love both of those time periods of their maximalist aesthetics that hid an almost insane cruelty.  Sores under velvet patches, all of that. I came of age amongst underground performers- strippers, drag queens, burlesque girls, whose self-willed, and self -created beauty, was more interesting to me than that of any fashion model. 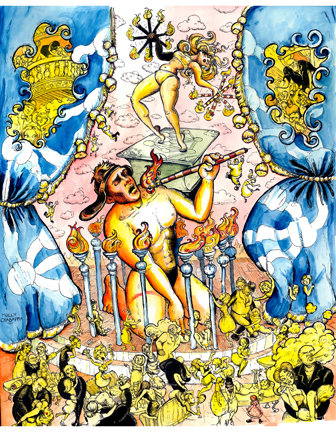 How and when did you start performing burlesque and for how long did you perform?

I started performing burlesque when I was 20, and kept at it till I was 24. While I did quite enjoy it, I was never very good.

You illustrate “Puppet Makers,” a DC Digital graphic novel described as a steampunk saga, which is currently in its third issue. You also have the graphic novel “Straw House” coming out in 2013, and if I read correctly, it’s about immortal carnies in the fifties. Please explain a little more about that project, as it sounds fascinating!

Straw House is the story of an immortal carnival that descends upon a small Appalachian town.  When ringmaster Al Kelly decides he’s looking for an heir, the resulting struggle will tear the carnival, and the town, apart.  It’s about love, family, rock and roll, and a gang of hillbilly angels.  I’m doing it with my constant collaborator John Leavitt.  We really hope we do a good job.

I saw a brief mention on your website of a stint in Turkish jail. Seriously? Do tell!

It was 3 hours because I was drawing in the South East and probably looking dopey.  The Jandarma were nice, but a group of guys with machine guns not letting you leave is scary.

You describe your art as “if Dr. Seuss backtracked through the time-space continuum and commissioned Toulouse-Lautrec to reimagine his storybooks.” From where else do you draw your inspiration?

You’re notoriously mad about absinthe, so I’d like to know, what are the best and worst absinthe-drinking experiences that you’ve had?

Best? Probably my party on Tuesday, swigging it from the bottle, while pink haired rockstar Kim Boekbinder stood atop by flat files and played me “Absinthe makes my heart grow greener.”

Worst?  Night train from Budapest to Paris.  It was still illegal in most of the EU, and I shared the car with a Japanese kid who was smuggling it in.  As soon as the Austrian border police left we drank it all like monkeys.  Ended up in English garden in Munich with him, and have no idea how…

Anything you’d like to add?
Work hard, make friends, and don’t give up.