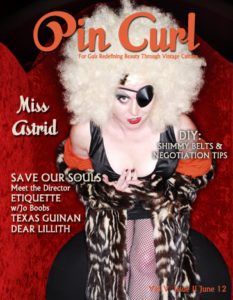 As a fellow emcee, my mind has been swirling with questions since watching you expertly host and perform during the 2011 The Burlesque Hall of Fame Weekend. Many of those questions were answered while attending your two classes, “Ladies & Gentleman: The Art of Emceeing Part 1 and Part 2” during BurlyCon last fall, but I’m truly thrilled to have this opportunity to interview you to learn even more about your history, current projects and words of professional wisdom.

Kate Valentine’s infamous career began in 1996 with the first neo burlesque troupe, The Velvet Hammer Burlesque and expanded with your creation of The Va Va Voom Room in 1997, but you’re also an accomplished actress, comedienne and director outside of burlesque. Please share with us your theatrical background leading up to that time period and your current endeavors. Which roles bring you the most pleasure and allow the most creative expression?

I come from a theatrical family, so I was always involved in performance in some way.  I was a very shy child, but I felt very liberated on stage living within imaginary worlds.  Immediately pre-burlesque, I was involved with studying and performing Shakespeare at Will Geer’s Theatricum Botanicum in Topanga Canyon, Ca. and dancing with a modern dance company in the Horton style.  Currently, I am making a theatre piece about honeybee depopulation syndrome loosely based on Euripides’ Trojan Women which will be presented in NYC in November.  And, you know, comedy.

One of your current projects is serving as the Director of Sex Crimes Cabaret, which “navigates amazing but true sexual legislation, taboos and history in a scintillating, multi-media cabaret” and focuses on “laws against consensual sex through history and the inevitable human reaction”. This concept is fascinating to me and is yet another reminder of how awesome theater in New York is! Could you elaborate on the concept of multi-media cabaret and your experience bringing this history to the public? Are there any particular laws or legislation that really struck a nerve with you personally or that you’ve seen trying to be resurrected in the current political climate?

Sex Crimes Cabaret is the brainchild of L. Gabrielle Penabaz.  I helped her as her director in late 2009.  Previous to working with her I was ignorant about sexual legislation and how it can impact and oppress us today. Sex legislation is often ‘lifestyle legislation’, like illegalizing sodomy to prevent homosexuality. Like so many, I have been scandalized that it has taken so long to legalize gay marriage.  However, I understand gay people who do not embrace the marriage construct and wish to keep their traditions “queer” and outside of mainstream culture.  Personally, I hope that the ridiculously biased law that homosexuals cannot donate blood (ostensibly because they might be carrying the AIDS virus!!) be overturned.

During the 2009 Burlesque Hall of Fame Reunion Showcase, you surprised the audience by marrying Michelle L’Amour and Franky Vivid on stage immediately following her performance. Do you have any favorite stories you’d like to share of other nuptials, proposals or odd requests you’ve been asked to perform while hosting?

It was a huge honor to be asked to marry Franky and Michelle, and something that I took very seriously believe it or not!  Other people have threatened to have Miss Astrid officiate, but so far they are the only couple I have married.  I wish more people would ask me — I love a wedding!

According to the San Jose Mercury News, Miss Astrid hosts “with enough attitude to sink the Bismarke”. Have you ever slipped into character offstage to direct your famous sarcasm and razor sharp wit at an incompetent customer service rep or other everyday annoyance?

I am mostly unlike Miss Astrid, but yes, I have been known to snap back.  I don’t suffer fools well, that’s for sure.

Many emcees dread the omnipresent heckler. What has your experience taught you about the motivations of an unruly audience member and what are your favorite tactics to maintain or regain control?

A heckler is either someone with terrible manners or someone who wants attention.  I think a heckler is often an emcee’s best friend.  They provide you with fresh material and they can help you gain the allegiance of an audience by forming a common enemy.  The key is knowing who to respond to and who to ignore.

Last fall at Burlycon you gave a refreshingly direct State of the Union Address which opened up an intense discussion regarding the past, present and future of our community. Would you like to elaborate on any of your comments? Have you been surprised by the direction of the debates that have followed and have you seen any positive changes in the community because of them?

Well, I feel a lot of different ways about the speech and the response.  As a seasoned performer, I felt compelled to speak frankly at BurlyCon so I do not regret that.  I was very concerned with trying to be constructive, so I was surprised when people thought that it was “mean”.  I have no desire to be mean, but maybe people heard Miss Astrid’s voice and not mine when they read my essay.  I was encouraged by the constructive dialogue and disheartened by people who resorted to childish name calling.  To what extent this has affected the community currently I’m not really sure, since I have been out of the loop with my babymaking!  I was hoping people would discuss the pageant issue more.  Instead, people really got focused on the semantics of professional vs. hobbyist.  Honestly, I think that missed the point, which is that anything that’s worth doing is worth doing well.

During this address you stated that “An emcee is not the icing on the cake of the show, it’s the eggs. If you cannot afford an emcee or more than three performers then, quite simply, you cannot afford to present a show.” These words convey the integral role of an emcee when presenting a quality show to the public, but some consider it to be a superfluous job or a necessary evil. How can we cultivate more respect, understanding and inclusion within the community?

Just to clarify, it is not totally impossible to make an emcee-less show.  I hear that The Beggar’s Carnivale in St. Louis is great & they have come up with a creative way to propel the narrative without an emcee.  But really the proof is in the shows: watch a show with a good emcee or with a live band and then tell me why it would be better the other way.  I don’t believe the reason for a lack of emcee is that people think it’s a “superfluous job” or a “necessary evil”.  I think it is lack of money or laziness.

Continuing with that theme, numerous resources including schools, workshops, videos, books and blogs are available for blossoming and seasoned performers looking to strengthen and diversify their skills for the stage. Do you have any suggestions for emcees looking for additional training, inspiration and support specific to our unique role?

Actually, I don’t.  There are plenty of ladies who’d like to learn to fan dance and so lots of classes for that. Less so for emceeing.  People are welcome to be in touch with me, I am happy to share what I know!

In your classes you’ve said that while hosting you are “the guy in the cement truck smoothing out the street” and that you approach each show “as a piece of music and I am the drumbeat or the conductor”. You also taught that a good emcee means being an entertaining custodian in service to the audience, the show and the performers. Can you share some insight on how you achieve this balance and refrain from monopolizing the stage?

I think probably thinking of the job as being in service to the audience and the performers is a good place to start.  It’s not a one person show, but a variety show.  I would suggest coming up with a game plan specific to each show in advance.  If you have time management issues and find yourself running long, maybe you should plan on only speaking as long as the act that preceded you — so no more than 5 minutes.

Singing karaoke is one of the tactics you’ve used to entertain an audience during an unexpected delay between acts.  What are your favorite tunes to croon along to and what is the most memorable reason you needed to sing them?

“Is That All There Is” by Peggy Lee is Miss Astrid’s signature song.  It was sung at the end of every Va Va Voom Room show, though usually live — with Brooks “Babyface” Hartell or with the Shadenfreude Drai.

In 2010, I unexpectedly put my karaoke backup tracks to use at the NYBF.  I was asked to do an impromptu moment of silence to commemorate the rash of gay suicides, which prompted the It Gets Better campaign.  I suggested that instead of a moment of silence we have “a moment of noise” and lead the crowd in a rendition of Journey’s “Don’t Stop Believing” — a song I had never sung and probably will never sing again. I t was a great spontaneous moment and a bunch up people got swept up enough in the moment to jump on stage for a sing along.

Motherhood has recently become one of your primary roles. (Welcome to the club!) Do you feel that you have found your groove as a Mother? Do you have any amusing or terrifying parenting tales that you would like to share?

I am one of a relatively small number of showgirls that has always wanted to be a mother, so for me the whole experience is a dream come true.  People told me it was going to be hard, but so far I feel nothing but immense gratitude.