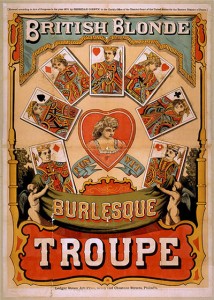 This month the Lowbrow Low Down is traveling back in time to the High Victorian Era…La Belle Époque…The Gilded Age…the latter 1800s!  The days of absinthe, Impressionism, and one of our own patron saints, Lydia Thompson and her British Blondes!

If you’re not familiar with Lydia Thompson, then a brief introduction is in order.  An English dancer/actress, Thompson toured Europe and then brought her show to America in 1868, where a 6-month tour became a 6-year sensation.  At the time, ‘burlesque’ theatre was transitioning from its traditional meaning (that of a parody play, or social farce) to something of a variety extravaganza with an added emphasis on the feminine form.  The risqué (at least in terms of the time period) show brought a new element to New York theatre- one that would certainly continue to thrive! 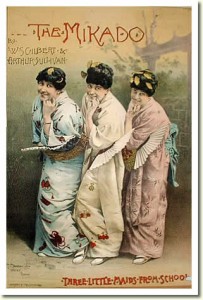 Music: At this time, music hall variety shows were at the forefront of entertainment in Great Britain, serving up a plethora of performing arts and popular song.  As with vaudeville in the states, the music hall evolved out of a saloon environment, and provided spectacular shows for those who may not be able to afford a trip to the opera.  Enter the famed Gilbert and Sullivan.  Between the 1870s and 1890s, W.S. Gilbert and Arthur Sullivan brought together opera and popular music to create over a dozen comic operettas.  While Gilbert wrote the words, Sullivan composed the music; they added elements of topsy-turvy, fantasy, and political humor to the comedy genre, and blended the traditional and the popular to help form musical theater as we know it.  If you’re near Austin or Houston and you’d like to catch one of the duo’s shows, you’re in luck – they each have a Gilbert and Sullivan Society dedicated to performing their influential and entertaining operettas!

Film: Skip to Paris, 1896, and we find our feature film: Can-Can (1960), starring Shirley MacLaine, Frank Sinatra, and Maurice Chevalier.  With abundant charm, a titillating love triangle, a battle over censorship, and magnificent dance sequences, this movie is among my favorite musicals.  These numbers showcase popular Parisian dances such as the title, Can-Can, an energetic and acrobatic dance of joie de vivre with skirts held high to give the audience a good look at the girls’ bloomers.  In spite of the law, Simone (MacLaine’s character), presents the dance each night at her Montmartre club, along with another crowd favorite, the Apache Dance.  In one scene, Simone sits talking to Chevalier’s character when, suddenly, their conversation is interrupted by a man who slaps, then grabs, Simone and yanks her to the dance floor.  Thus begins the dramatic, passionate, violent, and yet comedic, Apache dance.  Making mockery of the mad affairs of man and woman, the choreography is half dance, half stage combat, and all satire.  You can view it here.  (As a side note, if you enjoy documentaries, you might like the Legendary Sin Cities mini-series, particularly the segment on Paris, which is available on Netflix.) 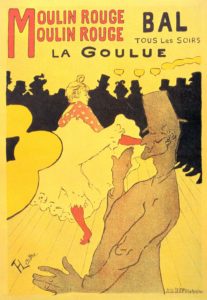 Art: This brings us to the Moulin Rouge.  The infamous Moulin Rouge (meaning red windmill) opened its cabaret doors in 1889.  It was here that famed performers such as La Goulue (The Glutton), known as ‘The Queen of Montmartre,’ and Jane Avril, nicknamed La Mélinite (a potent explosive), were captured in paintings and posters by Henri de Toulouse-Lautrec.  A regular at the Moulin Rouge and local houses of prostitution, Toulouse-Lautrec illustrated the bohemian lifestyle flourishing in Paris, and captured subjects and cultural phenomena that other artists ignored.  Before the breathtaking 2001 musical, Moulin Rouge, there was another film of the same title, from 1952.  Glamorous Zsa Zsa Gabor plays Jane Avril and the film is centered on the life of Lautrec, and the historical characters of the nightclub- I recommend it!

If you’re interested in his work, and you’re in the DFW metroplex, you’ll be delighted to know that October 14 will mark the opening of a special exhibition at The Dallas Museum of Art: Posters of Paris: Toulouse-Lautrec and His Contemporaries, which focuses on the birth of the artistic poster in the late 1880s, and particularly, the influence of Toulouse-Lautrec.  For more information see the DMA’s website. 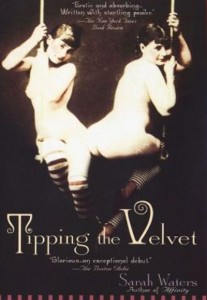 Literature: Back to England in the 1890s, and I’m currently engrossed in Tipping the Velvet by Sarah Waters.  This saucy book came highly recommended and it drew me right in with its vivid descriptions of Victorian England, and the music hall environment.  The novel explores gender, class, and lesbian love in the late 1800s…and I’ll leave it to you to ponder the real meaning of the phrase, ‘tipping the velvet!’

Another big hit on my fiction list right now is the Nellie Bly mystery series by Carol McCleary, which begins with The Alchemy of Murder.  Nellie Bly’s character is based upon the real person, a daring exposé reporter from the days when women were not reporters, and a woman who set out to beat the record set by fictional Phileas Fogg in Jules Verne’s seminal work, Around the World in Eighty Days.  In 1889, Miss Bly made it around the world in 72 days!  The book may start off a bit slow, but with Jules Verne, Oscar Wilde, Louis Pasteur, Henri de Toulouse-Lautrec, and Jack the Ripper as supporting characters, it turned out to be a very enjoyable tale of murder and intrigue, mixed with history!

If you prefer non-fiction, and you want to read something truly lascivious, check out The Other Victorians: A Study of Sexuality and Pornography in Mid-Nineteenth-Century England by Steven Marcus.  It’s badly in need of an update (1964), but contains some very interesting information about the less-repressed Victorians, and was the very first study to make use of the vast Victoriana materials collected in the library of Alfred Kinsey’s Institute for Sex Research.  A good portion of My Secret Life, the autobiographical sexploits of a rich and thoroughly debauched Victorian man, is reprinted and discussed in the book – it’s intriguing, but don’t say I didn’t warn you!