Film: Down with Love

Celebrate Singles Awareness Day with one of my favorite films, Down with Love.  With all the style of Mad Men and Pan Am, this picture perfectly captures the sillier side of sixties cinema.  Starring Renee Zellweger and Ewan McGregor, with eccentric supporting roles by David Hyde Pierce and Sarah Paulson, the film plays humorous homage to the lighthearted sex comedies of the 60s.  In fact, Tony Randall, who played a part in those comedies, alongside Doris Day and Rock Hudson, made his last film appearance in Down with Love.  The wardrobe is fabulous, the repartee is witty, the plot twists and turns like an Olympic gymnast, the editing/effects are clever and kitschy, and overall the film perfectly captures the stylistic essence of mid-century comedy.

See my favorite scene (split screen and innuendo at their finest) here:  Down with Love 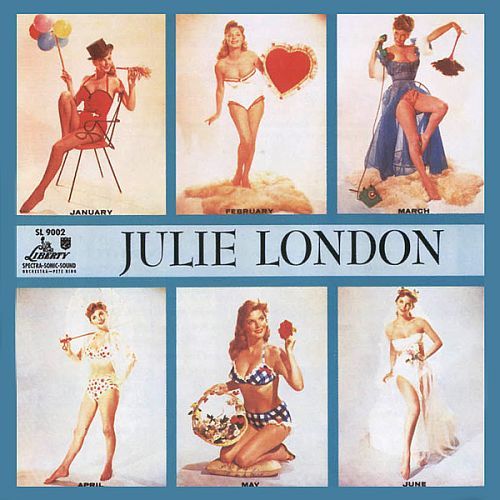 Calendar Girl, pictured here, is one of my favorite Julie London albums (the cover may have something do with that).  Miss London was not only the epitome of pin up, but the ultimate lounge singer.  With a soft, sultry voice, Julie seduced her audience as she sang along to the smooth jazz that she loved.  An accomplished actress as well, Julie performed in numerous films, and television and radio shows.  Her parents were a vaudeville song-and-dance team and Julie graduated the Hollywood Professional School in 1945- it seems that her path was always set for show business.  Between 1955 and 1969 she recorded 32 albums.  Hear Julie croon, “I belong to the man of the month club” in Time for August

I also recommend checking out the rock n’ roll musical, The Girl Can’t Help It (starring Jayne Mansfield and a top-notch list of musicians) to see Julie London sing her biggest hit, Cry Me a River, in a haunting, yet humorous scene with Tom Ewell.  Even if you’re not familiar with Julie’s repertoire, you may also recognize her recording of the Mickey Mouse March.  When asked, in an interview, how this recording came about, she said, “I was backstage in Australia, and I was rehearsing for a show at a nightclub.  I had my little girl, Kelly, who was just a couple of years old at the time, with me.  She got antsy, so I started to sing the song Mickey Mouse to settle her down or just get her attention.  The guitarist started playing it behind me, and we ended up doing the song in the show that night.  And it went over well.” 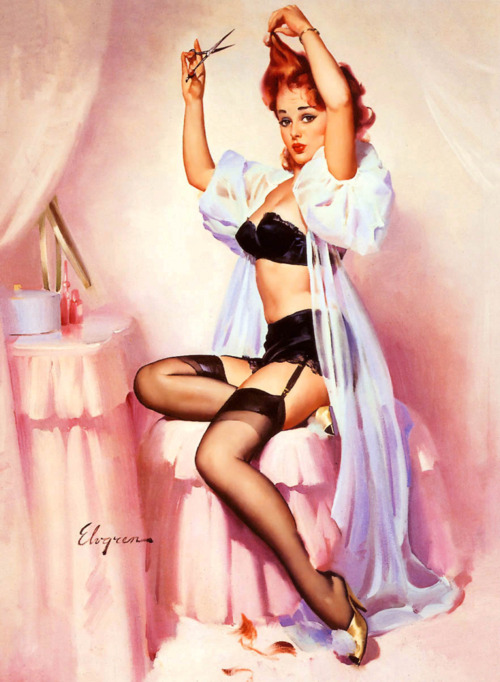 We all know of and love Gil Elvgren, the poster boy for pin up art.  During a career that began in the 1930s and lasted over 40 years, Elvgren painted scads of scantily clad gals, as well as iconic illustrations for Coca-Cola, GE, and several other companies.  A great American commercial artist during the field’s biggest boom, Elvgren did illustrations for all the best magazines, in addition to being a talented photographer, and teacher.  Not only did he produce successful students, but many of his models went on to successful careers too, such as Myrna Loy, Donna Reed, and Kim Novak.

Gil Elvgren combined serious painting with cheesecake, producing more than 500 oil paintings of lovely ladies.  Dallas Art News recently wrote, “Gil Elvgren remains the unchallenged champion of American Pin-Up Art, as evidenced by the $191,200 price realized for his 1956 Fire Belle (Always Ready), one of the master’s greatest works, in Heritage Auctions’ Oct. 22 Illustration Art Signature® Auction, and by the fact that fully six of the Top 10 lots in the auction featured his revered name.”

Aside from Elvgren’s merits as an artist, his pin up portraits stand apart because of his understanding of the genuine joie de vivre that makes pin up such a special and lovable aesthetic.  He said the model “with highly mobile facial features capable of a wide range of expression is the real jewel.  The face is the personality.”  And furthermore, “The head is very important…But especially important is vivacity – being alive.  It shouldn’t be faked but be sprightly and genuine.”

For more information, and nearly 250 full-color illustrations, I suggest the book Gil Elvgren: All his glamorous American pin-ups, by Charles G. Martignette and Louis K. Meisel, which includes a great overview of the history of American illustration and commercial painting, specifically as it relates to glamour and the evolution of the classic American pin-up.  Another great resource is the website, Gil Elvgren. 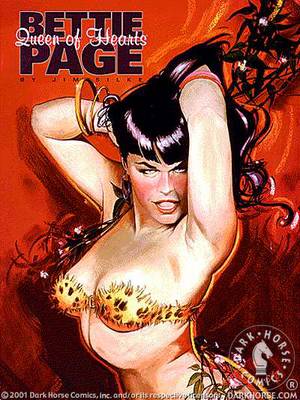 This book also contains a marvelous account of pin up art, pulp art, and under the counter photos.  It’s also a beautiful elegy to Bettie Page, and details the ‘rediscovery’ of her image, and resurgence of her popularity in the 80s and 90s.  This newfound, over the counter, popularity resulted in Betty Page Comics, The Betty Pages- a small magazine ‘devoted almost entirely to old photos of Bettie,’ and her appearance in The Rocketeer comics by Dave Stevens.  Several other artists began to revisit her iconic image, and for good reason!  As the author, Jim Silke writes, even the most amateur photographer could get great results due to her extraordinary charisma and “…her beautifully designed body.  Simply posed against a nondescript background, there are still enough design elements in her figure to survive the technical incompetence and make a graphically satisfying picture…it is the camera’s affection for Bettie that allows the paper girl to tell us something about the real girl.”  In closing, Silke sums up her enigmatic charm and timeless appeal, “…But no matter how many pictures of her I study, or how many drawings I make, Bettie remains elusive, a whole lot easier to pin up than pin down…Bettie has power that is neither rational nor explainable.  She is a character in tales told by countless imaginations, yet she is real.  She is fact and she is fiction…she is not only an unforgettable image but an individual of such disturbing delight and character that she is a one and only.  Bettie Page.  An American original.”