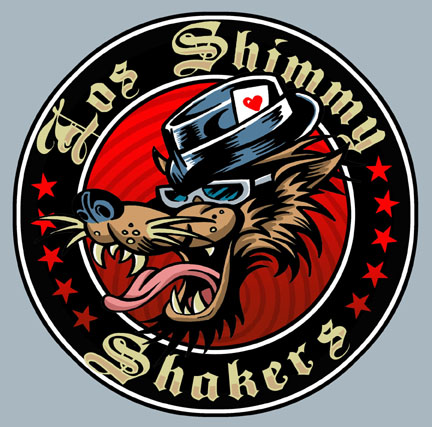 Q: You’ve been a burlesque fan for a long time, and the fact that most shows used canned jazz and big band music is what led you to start your band, right? After seeing Tease-O-Rama a few years ago performed with canned music, you were inspired and you talked about it for years, but you formed the band in 2010, played the first show in 2011, and since then Los Shimmy Shakers have played live Bump n’ Grind for Hubba Hubba Revue, Tease-O-Rama 2012, Viva Las Vegas 2012 and Ink-N-Iron 2012, just to name a few. That’s quite a start; you must be so excited! Can you tell us more about the development of the band and how things have evolved into what they are today?

Court: Yes, I’ve been a burlesque fan for years and always loved the Las Vegas Grind Compilations that came out in the early-mid 90’s. I went to Tease-O-Rama in 2007 and thought it was great but spent the entire show wishing a band was playing. I had been thinking of doing a band and after seeing that show was really inspired to finally put a bump n grind band together. I talked about it for a couple more years and then was feeling like a loser for talking about it and not actually doing it so in 2010 I began to form the band. I started talking with friends and finally hooked up with a buddy of mine Rudy (used to play in The Skegs, a surf band) who plays bass and began playing together in early 2010. We spent about 6 months writing songs together and imagining where the guitar and sax parts would be. Then a friend of mine Bret from a Garage band called the Flakes stepped in on guitar and helped write more songs and fill out the songs Rudy and I had been working on. He was a good fit for the band and certainly understood the style but for personal reasons just did not have time to dedicate to the band so left and was replaced by Pete (used to play in Mountain Pig, El Pollo Elastico, The Nads) played with us for a short time and helped us get Randy on sax in the band. Randy (played in Fromagique) stepped in on sax around Fall of 2010 and the band really started to take shape. Pete as well could not spare the time, so he was replaced by the perfect fit for the band on guitar, Larry (formerly of the Skegs.) Larry really understood exactly what I was going for and really helped make the band what it is. Larry had also been in a surf band with Rudy so they already had a rapport and worked well together which made writing songs together that much faster. After Randy and Larry had joined we wrote a lot of songs and had a very productive period of song writing much of which thanks to Larry. So by December we were in the studio laying down tracks for our 1st record “Shake ‘Em If Ya Got ‘Em.” We played our 1st show in January of 2011 for a Hubba Hubba Revue show which was great, and people seemed to really dig it. We spent most of 2011 playing shows, getting the word out and writing more songs. By December of 2011 we were heading back in the studio for record number two and by 2012 we had two records and were heading to Viva Las Vegas, followed by Tease-O-Rama and Ink-N-Iron. After Viva Las Vegas Rudy left the band to move to Las Vegas, which was a drag because he was such a major part of the band and had been there from the get go. He was replaced by Vance (Indigo Swing) who stayed for the rest of 2012 then we found Steve (used to be the Monarchs) on bass. Early this year Randy left and was replaced by Tony. This line up now is really solid and I’m excited to begin writing more music again and believe this line up will last. It has been a great start although it has recently been a bit of a challenge with members leaving and new guys coming on board. 2013 has had a slow start but looking like a strong finish as we have Tiki Oasis lined up for August.

Q: You’ve released two albums of all original Bump n’ Grind, Shake ‘Em If Ya Got ‘Em and Stiletto Nocturne, and I hear you might be working with Dionysus Records to release a vinyl LP of select tracks from those albums. Rumor has it you could even be recording a third? Tell us all about that, please!

Court: So we didn’t wanna wait for a label to put something out for us when we started so we did the first two CDs DIY. We have recently been talking with Dionysus Records about putting out a vinyl LP of a combination of select songs from the first two albums. We might release an LP with them at some point but not sure when. We are currently trying to get back to writing songs again but it has been slow going with all the member changes. 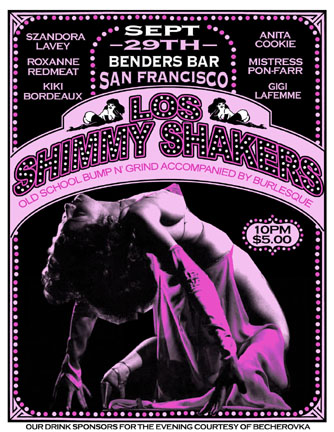 Q: For those of our readers that are more musically inclined than burlesque-oriented, can you please explain your musical style and influences? How does one describe the sound of Bump n’ Grind without the visual?

Larry: There was a period in the early 60’s when the rock world started to influence the pit band in Vegas. Til then the bands were more jazz or accompaniment for crooners. Younger patrons wanted newer music. So surf and rock music had a love child with the Vegas jazz and the kind of grind music that we are influenced by was born. It combines the rhythm and intensity of rock with the jazzier harmonies and instrumentation and came up with a gritty, grindy, kinda nasty sound.

Court: I think it is also important to point out the change in public consciousness and view towards Burlesque/Stripping. This music was born out of necessity. Burlesque had been becoming more and more popular and grew quite a bit from the 1920-1950s, by the mid to late 50s with lots of clubs putting on strip shows throughout the country and as we headed into the 60s the sexual revolution was beginning and the stigma and stereotype was being challenged. This combined with the popularity of rock and the advent of a new genre (surf) led to a natural combination of what had previously been used to accompany the dancers, blues, jazz and big band. This new type of music was a combination of jazz, blues, rock and surf. The late 50’s and early 60s were the real heyday of this genre and proved quite prolific as it is well documented in the Las Vegas Grind Compilations. I think they put out 6 of them.

Q: You recently announced that you will be performing at Tiki Oasis this August in San Diego. Care to share what you’ve got up your sleeves for the event? What are you looking forward to most?

Court: Yes we are doing Tiki Oasis 13 and very excited about it. Always fun to be in So Cal. We can’t tell you what we have in store; that’s top secret but it should be a lot of fun. Girls and guys from around the world will be performing so it should be a really exciting show. We play on Saturday night at midnight. We may also be playing a room party with Thee Swank Bastards and some other bands. We’re looking forward to working with some new performers. We’re also looking forward to some beach time and possibly some scuba diving after the festival.

Q: What are your favorite things about playing live music for burlesque performances? What challenges are presented that you don’t find at non-burlesque gigs, if any?

Court: It’s much more fun to put on a real show, not just a band playing the music. We are an instrumental band so the girls performing with us are like the lead singers, although not singing they are what people focus on, which is good because we are bunch of old guys, haha, not much to look at. What has been challenging as an up and coming band, is getting paid enough to really put on the kind of show we wanna do which is, girls performing to every song. We pay all the girls who perform with us, if we are getting paid that is, and so that is a tall order to get enough to pay all the girls and something for the band. I think this will shift as we get more traction and become more known with a better following. A lot of promoters only look at how many people you’re gonna bring in, not the show you’re gonna put on. So we are beginning to start to produce our own shows so we can all the shots and do the kind of show we want to produce.

Court: Well we are working on writing some new songs, possibly record #3, as well as some bigger and better shows. If all goes well we will be performing in Napa California this September with the Reverend Horton Heat which will be a lot of fun. We’re also starting work on an entirely new show with our good friend Molotov, a sword swallowing side show performer. He has performed with us 2 or 3 times and is a blast to work with. He does an amazing knife throwing act, where he puts a cute girl on the “wheel” and catches his knives on fire then throws them, hopefully narrowly missing the girl. We are really excited to work with him more closely to make a really killer show. He may be performing with us at Tiki Oasis this year.

Court: It’s super exciting to see the vision of this band finally come to fruition and be part of a great creative group of guys. Really looking forward to the future with this group. Also thank you so much for talking with us.

For more Los Shimmy Shakers, find them at www.reverbnation.com/losshimmyshakers and www.luckymule.com/lss