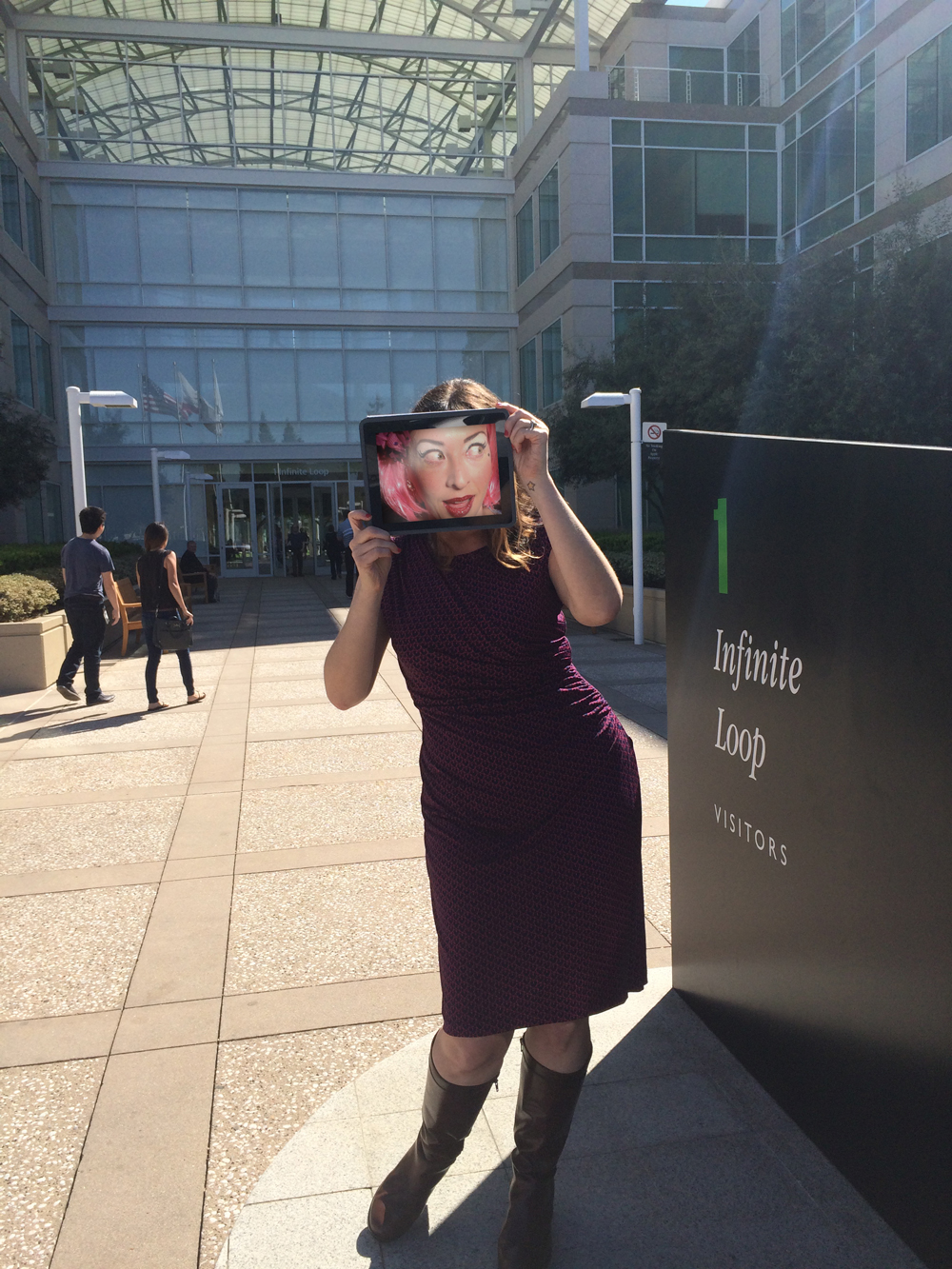 Q: Oh my gosh! I caught your Burlesque-O-Matic video from the 2014 New York Burlesque Festival and was blown away!   The wit, creativity, innovation, timing, thoughtfulness (there’s a string taking down the zipper leaving your hands free to hold the IPad!) was mind-blowing! Please describe how you came up with the initial concept and the evolution of the piece. Take us through your process.

Thank you! I probably had the original idea about a year before I took it to the stage. As with most things, I tried to convince someone else to do it first, but really, who wants to perform someone else idea? Kind of the antithesis to the whole DIY that gives burlesque its heart.

It all stemmed from the reality that everyone is looking at these screens all the time and I should mock it while the reference is relevant. It sat dormant in the back of my head until Fancy Feast asked if I would perform in her show at Coney Island called The Unbookables. The concept was acts that are rarely performed because they are either too sad, too weird, too naked, or too messy — or any other reason a producer might pass. I thought undeveloped and potentially not ready in time counted.

To quote our email exchange:

Brooklyn: Am I in the show?

FANCY: You are. Was that a good idea on my part?

Brooklyn: Could be one of the best or one of the worst – but likely something in between.

My husband and I quickly shot the footage in our bedroom using black fabric flung over our bed as the backdrop. Originally I imagined it with more of a storyline (something about an x-ray machine) and animations in the video. But the more “stripped” down it became, funnier it felt to me.

It ended up being a wonderfully magical night and the routine is now one of my favorites to perform.

The commentary on live art -vs- pixel media cracks me up. The only thing more amusing to me than performing it live, might be to know that someone is watching a video of it. How meta!

I do have a fantasy to perform it for apple execs at a corporate event… hint, hint, for any of your readers out there who can hook a sister up. 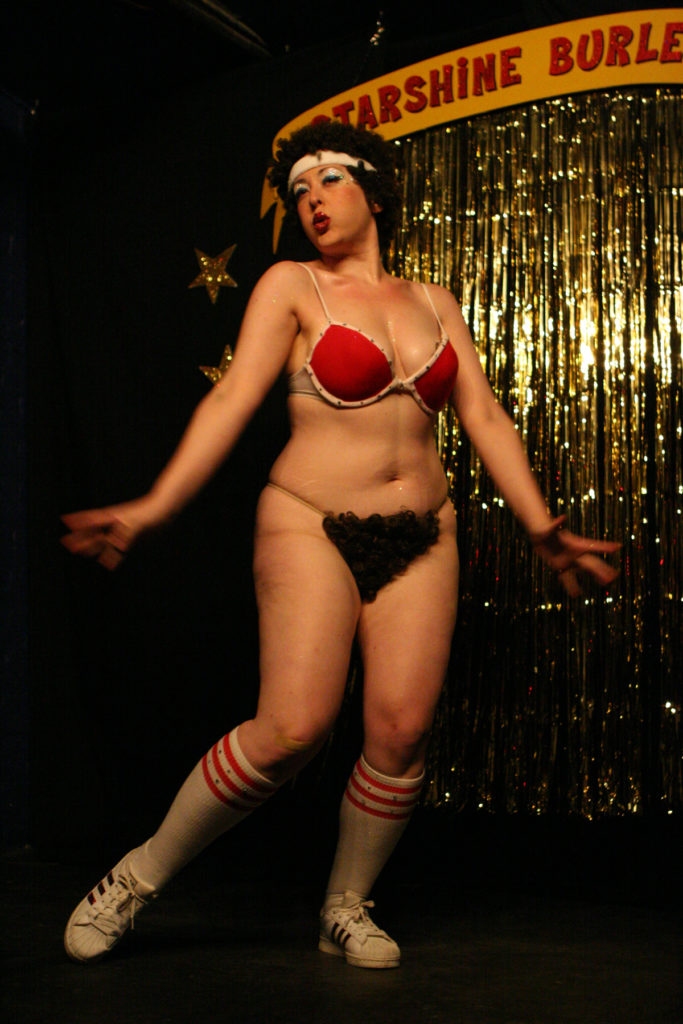 Q: When we play back performances for self-critique, generally we are looking at a tiny screen, a computer monitor at best. What was it like seeing your number and your body projected on a big screen?

My only concern that night was the color balance and was it bright enough for the audience. We had some technical difficulties before the show and the footage went from super dark to wildly burnt-out.

I do most of the act facing the audience. The only time I face the screen is when my giant, jiggling, thrusting, 8-foot-ass is glowing up there for the world to see. I was just happy to see it looked color corrected.

After I finish the performance, when I glance back and see the host take to the stage and look like they are caught between and my massive twirling breasts… yeah, I love that moment. 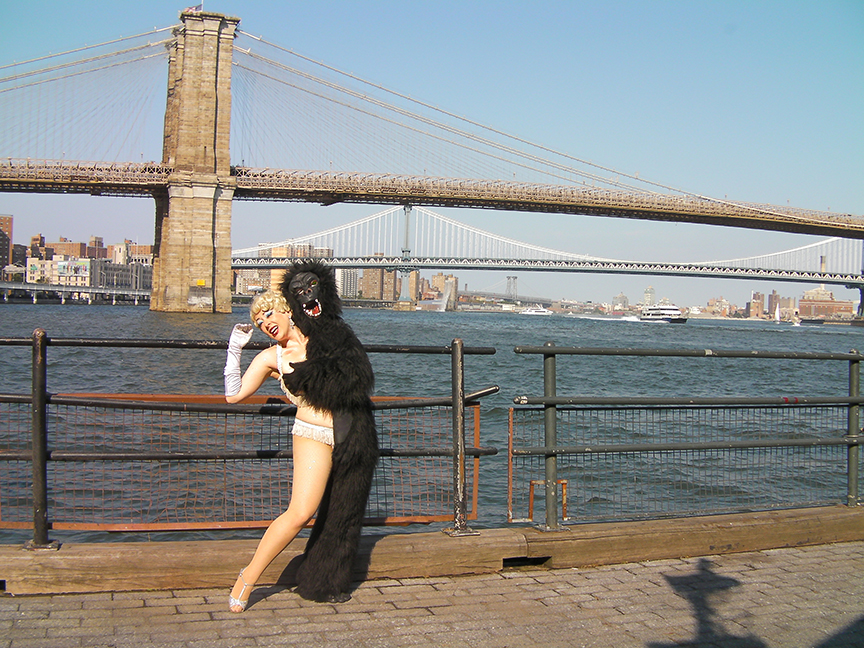 Q: Exemplified by numbers like King Kong/ Fay Wray, you embody burlesque comedic excellence! What three pieces of advice would give to a performer who is working on his/her comedic arsenal?

Q: Since you are often in outrageous costumes or with huge props, do you have a particular pre-show ritual that helps you get into character?

I get full on iguana pre-show. Aren’t they the ones that stand very still and conserve their energy?

Q: In 2010 you became a parent for the first time. Did you take a break from burlesque at all? In what ways has motherhood changed your life? How do you find balance?

I took a break for a few months before and after I gave birth to Max. Now I do not perform as much as I used to.

Before becoming a mom I was already a wife, child, sister, friend, designer, biker, pigeon-lover, sculptor, painter… balance was already an issue.

Motherhood is not the sole reason I am not performing as much.

A lot has changed in the past few years. I just perform differently.

Balance. Does. Not. Exist. 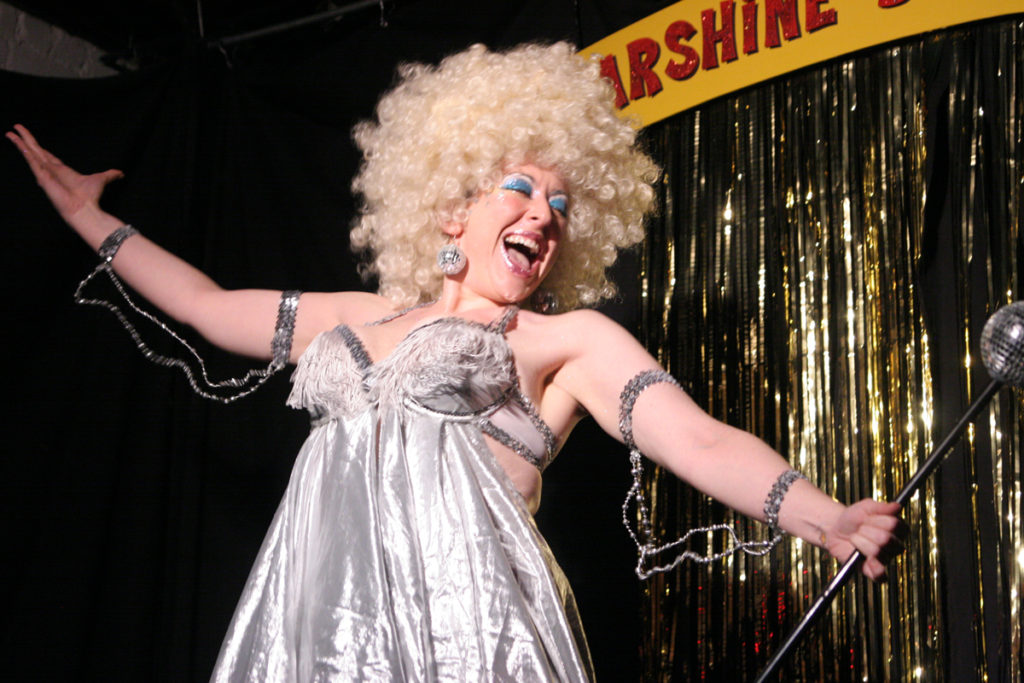