“God bless Lili St. Cyr!” Janet belts out in the mock-burlesque musical number “Wild and Untamed Thing” in the movie Rocky Horror Picture Show. I tried for years to figure out what she was saying. Thanks, Pin Curl, for guiding me to my answer. 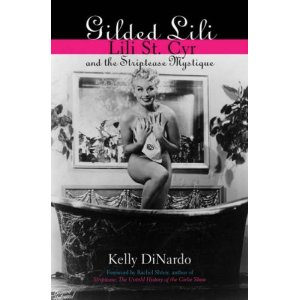 Mike Wallace interviewed the legendary burlesque striptease icon, Lili St. Cyr in October of 1957 expecting to meet a run of the mill, heart of gold, bad girl who is really a good girl who fell into an unfortunate lifestyle according to standards of the day. What he found was something entirely different. He met a brutally honest woman who had no qualms answering his questions of how she really felt about her profession and herself.

Lili St. Cyr, born Willis Marie Van Schaack, on June 18, 1918 in Minneapolis, MN into a family where she wasn’t necessarily wanted or needed. Her unstable childhood, although still producing an intelligent, beautiful and talented woman seemed to have left its mark on her self-esteem.

St. Cyr never really aspired to become a burlesque star. Lili was first hired as a dancer by accident. She accompanied her sister to an audition and was offered a job as well. She danced at venues such as Florentine Gardens and the Music Box, and began to concoct her own signature style of fanciful and creative numbers beyond simply removing clothing. Anyone can do that. St. Cyr created storylines in her routines that came to be what voyeurs expected from her, to be enticed, but also entertained. One such move was the ‘Flying G’ in which her G string would be caught by a fishing rod and pull her off stage. Some of her most well-known numbers were “Jungle Goddess,” “Persian Harem,” and “Ballet Dancer,” the latter in which she incorporated the years of ballet lessons from her youth.

Lili St. Cyr was photographer, Bruno Bernard’s muse, too. She was also in a few films, but usually as a striptease artist and was not granted acting roles that other actresses were offered. She was meant for live performance and continued to wow audiences with routines that included bubble baths and even a backward strip. In the backward strip, St. Cyr entered the stage barely covered and would provocatively redress herself.

This backward strip might have been symbolic of her struggles with her self-esteem and her career. Audiences applaud at the end of an act, so if they could applaud her for being herself and fully-clothed, she might begin to feel legitimized about her career again.

In the Wallace interview, after about 15 years in the scantily-clad spotlight, Lili admits she wasn’t proud of what she was doing for a living and was embarrassed by it. She expressed wanting to leave the business but needed to support herself. Sadly, she did not feel herself capable of doing anything else to make a living. St. Cyr, married at the time, wanted to quit her lusty life of burlesque as soon as she could be supported by her husband at the time. He was one of six she had in her lifetime.

Lili also admitted to not being part of any major religion and had no desire to bear children. In the 1950’s coming out with these statements instead of slopping frosting on her feelings to say that of course she one day dreamed of dancing around the kitchen surrounded by babies and attend church in her best every Sunday, was somewhat shocking.

These were not rash statements Ms. St. Cyr gave. They were truth. In Kelly DiNardo’s biographical book on the star, Gilded Lili, she reveals that she has had more than one abortion. Grief after an abortion as well as low-self esteem or failed marriages, or disconnect in her family life or all of these factors may have lead her to experiment with heroin. However, Lili herself had said that using was part of the Hollywood lifestyle and that some did it for attention from others, and others still to have a non-existent moment of privacy in the public eye.

She continued to battle with heroin years later and was seen less and less in public. She died January 29, 1999 in Los Angeles at the age of 80 (thus not a death likely caused by heroin, more likely from old age), but like a stained shroud, left her mark in burlesque herstory.

For the above mentioned Interview with Miss St. Cyr, please click here.