The Great Ziegfeld: A Self-Made Legend

Born in 1867, Florenz Ziegfeld forged his legendary status as a Broadway producer through numerous productions, most notably The Ziegfeld Follies and the original production of Show Boat.  He brought together the best of the best in every field, both onstage and behind the scenes, to present glitzy, glamorous spectacles like no other.  With the showmanship of PT Barnum and the charm of Casanova, Ziegfeld truly glorified, and adored, the American girl.

Ziegfeld’s first success as a publicist came when he brought fame to The Great Sandow during the Chicago World’s Fair of 1893.  Sandow, a progenitor of modern bodybuilding, modeled himself after classical Greek statues, working tirelessly to achieve the ‘ideal’ proportions of man.  While he performed great feats of strength for his audiences, the act was not very successful until Ziegfeld began enticing rich society women to not only see Sandow flex his 58-inch chest up close and personal, but also squeeze his bouncing biceps backstage!

Ziegfeld’s next sensation came in the form of 18-inch ‘wasp waist’ music hall singer, Anna Held.  Miss Held delighted American audiences with her hourglass figure, French accent, and flirtatious songs.  But Held did not succeed on her vivacious personality and risque tunes alone –Ziegfeld pumped the press machine relentlessly.  It seems that he was never afraid of telling a little lie, so long as it was interesting.  For example, ‘Flo’ spread the word around that Miss Held regularly took milk baths, and even went so far as to publicly accuse a dairy of delivering sour milk to Anna, then sue the dairy!  A Follies publicity stunt consisted of a staged police raid during a particularly tittilating number, which ended with the officers in uniform doing a kick line with the chorus girls!

For over a decade Ziegfeld tailored his productions around Anna Held and it was she that gave him the idea for the Ziegfeld Follies format, modeling it after the Folies Bergere.  What started out as a common law marriage finally ended in divorce when Anna could no longer ignore Flo’s affair with Lillian Lorraine, who he had even moved into an aparment upstairs from his and Anna’s own suite.  Lillian, a tempermental Follies star, was only one of Ziegfeld’s many dalliances, including Olive Thomas and several other starlets.

One amusing anecdote about Lillian Lorraine came about when she threw a tantrum, accusing singer and comedienne Fanny Brice of attempting to steal a boyfriend away from her.  The argument ended with Brice dragging the diva across the stage by the hair of her head, in front of an audience!  Brice was one of the great comics catapulted to stardom by Florenz Ziegfeld.  Another was Bert Williams, the first black actor to join a white cast on Broadway.  Although the racial lines were still quite clear, Ziegfeld withstood multiple protests for even booking Bert.  Flo worked with a remarkable range of stars, booking established vaudeville talents such as W.C. Fields and Will Rogers, and discovering scores of newcomers.  Many of his cast and crew went on to work in the burgeoning Hollywood film industry. 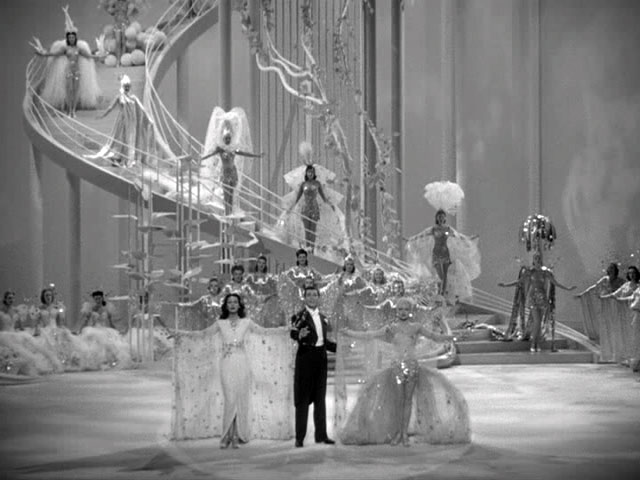 Flo enlisted the incredible talents of set designer Joseph Urban, who created the show’s signature sweeping staircases that reached toward the heavens and grandiose rotating sets adorned with scores of lovely girls.  Urban built trap doors, fully glittering fountains, and a floor that lit up when touched by a dancer’s foot, and he also designed Ziegfeld’s own theatre in 1927.  Lavish backdrops, exotic animals, and gimmicks such as numbers specifically designed to be viewed through 3-D glasses all made the Follies shows spectacular above all else.  Irving Berlin and Jerome Kern composed original music for many of the shows, while Lady Duff-Gordon, survivor of the Titanic, costumed the girls in the enticing and opulent garments that set a Follies girl apart from any other showgirl.  The costumes and sets were often conceptual, artistic, and wildly creative.

The first Follies show took place in 1907, and from the very beginning Ziegfeld offered up the luxury, allure, and laughter that modern audiences were after.  The production cost was a whopping $13,800, but it paid off by pulling in $130,000 in ticket sales.  In the early 1920s, Follies shows ran for over 500 performances apiece and in 1924, Ziegfeld shelled out $170,000 to make sure the production had that magical ‘Ziegfeld touch.’  The Ziegfeld Follies, by Marjorie Farnsworth, describes that special touch thusly, “First, Ziegfeld knew the subtle line between desire and lust, between good taste and vulgarity, and never crossed it…Second, the exhibitionism which was part of his private life was not contrived.  It was an integral part of the personality mechanism that made him what he was: a gambler who had an almost childish irresponsibility toward the value of money and an equally childish conviction that he could always get some more when he wanted it.  Most of the time he was astonishingly right.” 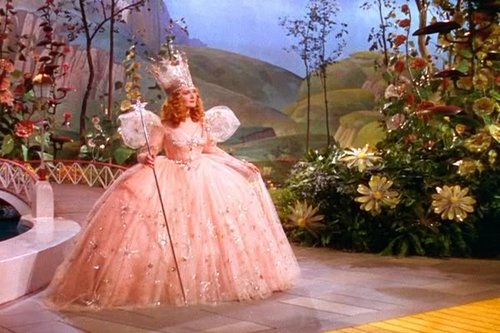 In 1914 Ziegfeld married the young actress, Billie Burke, who he also starred in the Follies.  Although she retired from film for a time to raise their daughter, Patricia, Billie enjoyed a long and critically acclaimed career.  Today she is best remembered as Glinda The Good Witch.  Billie and Florenz remained together, despite his philandering, until Flo’s death in 1932, and Billie worked hard to clear the debts incurred by Flo in the stock market crash, and to preserve the name of Ziegfeld in the annals of history.

There are many films that make tribute to Mr. Ziegfeld and his career, including those listed below.  The Great Ziegfeld is a marvelous, partially fictionalized biopic, and Ziegfeld Follies has a stellar lineup of some of the most talented performers of the twentieth century, presented in a musical revue format with stunning costumes and scenery.

The Great Ziegfeld: www.imdb.com/title/tt0027698/ from 1936, starring William Powell as Ziegfeld, Fanny Brice as herself, Myrna Loy as Billie Burke, and Frank Morgan of Wizard of Oz fame (the wizard) as well as Ray Bolger, the scarecrow from the same.

Ziegfeld’s own, and only, foray into film, Glorifying the American Girl: www.imdb.com/title/tt0017896/ from 1929, starring Mary Eaton, sister of Doris Eaton Travis.

See ziegfeld-follies.tumblr.com for a plethora of magnificent photos of Ziegfeld girls.