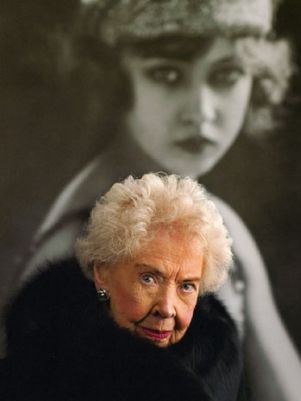 Few of us are lucky enough to enjoy either the longevity or the fullness of life that Doris Eaton did.  Born March 14, 1904, Doris witnessed almost all of the amazing twentieth century, as well as the unfolding of the twenty-first.  In 2010, shortly before she passed away, Doris received her final standing ovation in the New Amsterdam Theatre, as the last living Ziegfeld girl.

At 14, Doris was the youngest girl to perform in The Follies, and she was the last dancing too, performing annually at the Broadway Cares/Equity Fights Aids “Easter Bonnet Competition” for a dozen years preceding her death.  Young Doris was dancing in The Follies when fellow Ziegfeld girl, Gilda Gray, first popularized the shimmy.  Along with her siblings, she was making films in Hollywood when John Wayne was just a prop boy and Alfred Hitchcock was still writing title cards for silent pictures.  During the twenties, Jack and Sam Warner, her upstairs neighbors, regularly came down to mingle with the show crowd gathered there, in hopes of starting their own studio.  Other regulars at the Eaton household included Fred Astaire and Charles Lindbergh, with George Gershwin on the piano.  In 1929, Nacio Herb Brown wrote a little ditty called ‘Singin’ in the Rain” for her, which she debuted at the Hollywood Music Box Revue.  She rode in an airplane less than twenty years after the first successful flight, lived through Prohibiton and two world wars, and witnessed the nineteenth amendment, giving women the right to vote.   Doris Eaton was named just weeks before Times Square was given its name, and Doris was there, dancing in the square, for its centennial celebration.

When Doris was just a child, her eldest sister, Evelyn, used to direct the younger children in backyard productions, which led to five of the seven Eaton children working in showbiz at some time or another.  Doris’ career began at age seven with a role in the Nobel-winning novel-turned-play, “The Bluebird.”  The fantastic Eatons performed regularly at Zefferino Poli’s Washington, DC theatre, where President Woodrow Wilson was often in attendance.  After doing the touring circuit, the Eatons wound up in New York City, taking with them a young Volga Hayworth, who didn’t make a very big splash in showbiz, although her daughter, Rita, certainly did!

For seven years straight at least one of the charistmatic Eaton children was performing in The Follies.  One of them, Pearl, aided with Follies choreography and became Broadway’s first female stage manager.  Pearl was a regualar in The Frolics, as well as Earl Carroll’s Vanities and George White’s Scandals, and RKO’s dance director for a time.  Another sister, Mary, became The Follies’ prima ballerina, wowing audiences with her intricate sequence of  impeccable pirouettes.  Mary, along with Doris and their brother Charlie, also experienced success in Hollywood.  After Mary and Doris tied in a seven-state beauty contest, Doris gave the follwing beauty advice: “Don’t hire a taxicab when you can afford to walk.”  When Doris first appeared in The Follies, by law, children under the age of 16 were not allowed to perform in musical comedy, so she took the name Doris Levant and the following year, Lucille Levant.  By her third year in The Follies, she was finally 16 and was promoted to ‘specialty dancer,’ under her own name.    It was during this time that Doris met Babe Ruth (who, incidentally, married another Follies girl) and had her very own baseball signed by him on a publicity assignment.  Showbusiness was booming for the Eatons.

Then came the Great Depression and the Eatons’ careers were cut short.  Doris eventually found steady work in 1936 as a dance instructor at the original Arthur Murray dance studio.  She enjoyed a long, successful career with Arthur Murray, opening the first new branch of the studio, in Detroit.  At one time there were nearly 300 Arthur Murray dance studios, 18 of which belonged to Doris.   The studio brilliantly marketed their classes with a dance-for-health campaign, and social dancing was at peak popularity.  Doris wrote a weekly newspaper column, On Your Toes, which was full of dance advice along with delightful illustrations, and hosted her own television show,  for seven years.

Both of Doris’ younger brothers came to work with her at the studios and in 1950, at Charlie’s suggestion, the school began to host dance getaways in Havana.  These dance vacations were enchanting trips to paradise that brought the attendance of celebrities such as Ava Gardner and Ernest Hemingway.  Unfortunately, that party ended in 1959 when Fidel Castro took Havana.  Of course, in the sixties everything was changing and, as couples’ dancing declined in popularity, the Arthur Murray empire began to lose money.  Doris had no choice but to sell each of her branches in the late sixties.  Those years, sharing her love and knowledge of dance with so many, were precious to Doris.  As quoted in Lauren Redniss’ biography, Century Girl, Doris said, “When I see a woman moving over the ballroom floor in grace…precision…feeling…tasting the joy of movement…creating a segue of pattern pictures, all coordinated to a rhythm…then I know this person is at one with the universe – at one with God.”

Doris met Paul H. Travis when he was taking a dance course with her and after 8 years of courtship, they wed.  Doris was 45 at the time and, although she had married producer Joe Gorham at the age of 18, he unfortunately died of a heart attack less than a year later.  Despite an 11 year relationship with Herb Brown, Doris did not remarry until she fell in love with Paul, and she never had any children.  The couple raised racehorses instead, moving to a ranch in Norman, Oklahoma in 1969.  Then in 1980, Doris decided it was high time she gave herself the education she had missed during her busy youth.  After obtaining her G.E.D., Doris attended the University of Oklahoma, graduating cum laude at age 88.  Later, upon her one hundredth birthday, Oakland University granted her an honorary Doctorate of Humanities.  For her speech at the commencement ceremony, she sang a number, “Ballin’ the Jack,” from the 1913 Follies, much to the delight of all the graduates. 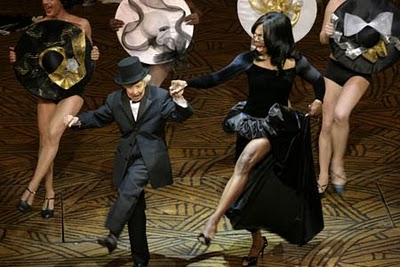 By this point in time Doris had already made her stage comeback at The Amsterdam, beginning with the newly renovated theatre’s opening gala in 1997.  The event brought together the last five Follies gals, of which Doris was the only one still able to perform.  At age 94 she repeated her performance from 1919’s Follies and kept returning each year to perform, while all the other Ziegfeld girls passed on.  Doris did numerous interviews and documentaries and even made a cinema comeback with a cameo role in 1999’s Man on the Moon.  Doris celebrated her centennial birthday on Broadway, with an enormous pink cake that was taller than she.  As Tom Viola, Executive Director of Broadway Cares/Equity Fights Aids said of Doris, “no matter her age, when the stage lights hit Doris she was instantly and forever young.”  Without any medications or help from doctors, Doris kept on dancing and didn’t stop until she was 106.

For further reading on the wonderful Doris Eaton Thomas and her marvelous life, I highly recommend Century Girl: 100 Years in the Life of Doris Eaton Travis, Last Living Star of the Ziegfeld Follies by Lauren Redniss.  I was delighted to find that Doris also wrote an autobiography, The Days We Danced: The Story of My Theatrical Family from Florenz Ziegfeld to Arthur Murray and Beyond, which I have not yet had the pleasure of reading.  For charming photos and footage of her performances with Broadway Cares, see: http://www.broadwaycares.org