1. You’ve never performed in Texas, correct? What are your expectations for your March 20th show in Dallas?

I am really looking forward to coming. The promoter has been incredibly welcoming. Generally I have no expectations or pre-judgments whenever I perform somewhere new; I just give everything to my audience wherever I am!

2. What made you choose Dallas for the location of the U.S. premier of your new film, “Burlesque Undressed”?

There’s a great tradition of entertainment in Texas and I’ve been approached a number of times to perform there. The opportunity to combine a USA Film Festival premiere with a performance (which features Dirty Martini and Perle Noire) was a great idea for collaboration.

3. Have you noticed any significant differences between your audiences in the U.S. and those at your shows in the U.K.?

I find the audiences equally appreciative, and with a similar split of around 60% female to 40% male. If anything I would say that perhaps the mainstream American audience is a little more conservative than the European audience.

4. Your first novel “Tease” came out last year, and your second, “Ambition” will be out later this year. Care to tell us a little about the upcoming book? What other literary aspirations do you have?

The upcoming book is called ‘Ambition’ and it’s set in Vegas. It’s another bonkbuster and so you’ll find plenty of sex, scandal, private jets, Alpha males, superheroines, feathers, big hair…I think the best way to sum it up would be Dynasty meets Paul Verhoeven’s ‘Showgirls’. I’m seriously considering setting the third one in Dallas…so I hope I get to come back for some more in depth ‘research’!

5. After seeing you in person, I must say that the most astounding of all your breathtaking features was your waistline. You mention in your film that your waist shrinks to 19 or 20 inches when you’re wearing your corset. Have you always been able to tighten it so severely, or did you train your waist by tight lacing? If so, how long have you been tight lacing?

Thanks! No I don’t train my waist, I have an hourglass shape at rest, I’m 38-26-38 – so it’s not too much of a problem for me to take it down. The key for me to get the extra inch is just to not eat anything bulky the day of a show. I wouldn’t recommend it to anyone as daily wear and I only wear them that tight for short periods, I find it very uncomfortable to go down to 19 inches, as it hurts my back in particular. I once nearly vomited right before a show when I realized I couldn’t actually breathe. But I was stuck in the darn thing, with my shoulder pack strapped on underneath, my crystal underwire garroting my breasts, my headdress clamped in place, a choker tight around my throat, and sweltering under 50 kilos of feathers – I think it was a costume claustrophobic reaction. I’m sure there are many out there who identify!

6. In your film, your milliner Stephen Jones made the comment about your grandiose wardrobe, “It’s a costume. But she always wears it; it never wears her.” Can you think of any scenarios (performances, photo shoots, etc) in which you felt like your costume was “wearing you”? I’ve heard you describe some of your headdresses as “medieval torture devices.” How do you manage to make wearing them look so easy? (and glamorous, at that!)

Some costumes can be painful to wear, but it’s the smile you wear that completely outshines all that discomfort. If you want the exaggerated visual effect that the costume gives then you just find a way to deal with it. You can ‘tame’ the costume – rehearse a lot with it and find out what movement you can and can’t do, and get used to the pain/weight/restriction. Ultimately I think your persona still has to be the star, rather than the rhinestones – so the costume should suit, and work for the personality, not the other way around. I don’t mind the ‘no pain no gain’ thing – if it’s a hell of an effort to get it right then it feels like I’m going the extra mile in my presentation. I somehow feel more dressed to kill if my feet are dying in 6 inch heels. This will get me lynched by feminists, but it’s just how I feel, for me I don’t see the difference between that and the pain I feel after 100 crunches in the gym!

7. Other than the snag you ran into when choosing the name for the Tease Show, have you had any other experiences with censorship?

Not especially. Although occasionally some of my corporate clients ask me to reveal less, and not to remove my bra. (Dior for example). I’ll work closely with my clients to make sure we meet in the middle and achieve something they are 100% comfortable with, whilst still giving a burlesque performance. I’m not sure there’s any point just doing a dance routine in a corset, I wouldn’t try and pass that off as burlesque. 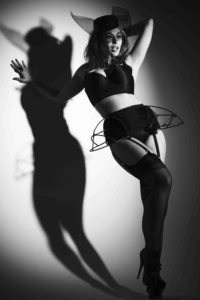 8. I’ve read that you immersed yourself in books as child, and in your film you touch on the topic of the escapist element of burlesque. Are your performances a way for you to bring those childhood fantasies to life? I mean, what little girl wouldn’t want an 8-foot crystal-encrusted red rocking horse or a 6-foot bejeweled telephone?

Actually an element of that horse prop was inspired by memories of the rocking horse my grandfather carved for me when I was tiny! However my shows are very much centered around ‘The Woman’ and I don’t really perform girlie things – no tutus or cupcakes. (At 6’3 in my heels it would look absurd if I came over all porcelain doll.) For me the escapist element came about because I always loved to create fantasy worlds and continued that into my adult life through working in film, and with writing and art. I am a huge fan of ‘camp’ which obviously involves an exaggeration of reality too, I love to include humor, and a sense of ‘ridiculous’, it’s probably just the European eccentricity in me.

9. What upcoming projects are you excited about? What are your goals for the upcoming year?

I tend not to talk too much about future projects in case I jinx them! But I will have some fabulous new performances in store, books….

10. How do you go about obtaining the goal of being perceived as “other-worldly,” as you mention in your film?

I used that term I guess as a way of relating to the concept of a ‘glamour’ which is, literally, a spell. With showgirls and actresses in mind for example, in setting up a much more exaggerated version of reality, it presents a vision to an audience that they would never see in everyday life – ie not in their immediate world – otherworldly. That way it becomes a special and memorable experience to watch and it has the capacity to transport the audience away from their every day concerns. However if you think about it, we create this believable idea that we waft around in gowns and rhinestones all day – the irony is that it’s not just an illusion, we really do live like that – because it’s part of the job, it’s vertical integration.

11. How do you think burlesque will change in upcoming years to accommodate the current boom in the industry?

Certainly there are great opportunities for mainstream awareness. Burlesque was always meant to be populist and accessible for both high and low culture, so it’s good to see a return to a mainstream audience base. Although it’s impossible to predict how the genre will evolve. I have no idea! I just hope that in whatever direction it progresses there will continue to be great new ideas, and high quality. If there aren’t then the audiences won’t want to come back for more!

12. When U.S. audiences first saw you, it was at the 2007 Miss Exotic World competition where you took the crown, but what about the first time you ever hit the stage as a burlesque performer? Did you have large scale props, fabulous costumes, and spot-on choreography or was it more “modest”?

Back in ‘98 there were no burlesque clubs in London; I performed on the performance art scene. There wasn’t the stage space for huge props, and there weren’t the audiences back then to pay for $50,000 costumes! However it was a vibrant and creative underground scene, I learned a lot. My first ‘classic’ act was a ‘garden of delights’, with an old velvet chaise lounge covered in fresh flowers, roses, petals, it smelt great but was pricey to do every show. (In retrospect it was a little like Lili St Cyr’s flower-covered throne.) I also experimented with Berliner cabaret influences, some of my acts were more ‘neo’. I surprised an audience once when I entered in immaculate black Victorian men’s riding gear to a baroque, before stripping into a military pony girl in sparkling harnesses to a Goldfrapp heavy electro cover of ‘Yes Sir I can Boogie’ which she sung as a political statement about the 2nd Iraq war. I really enjoyed those early days of experimentation! I guess it allowed my stage persona to develop naturally.

13. You found your burlesque name when the gas man compared you to the comic book character Modesty Blaise. Other than physical characteristics, is there anything else about her character with which you can identify?

Yes she had been a child without a family who had to grow up quick. Other than that, no I’m not a hit woman. I do have a secret penchant for thigh boots though, but as part of uniform or riding….

14. With so many projects, from managing the details of every production from the props & costumes to the talent, to writing and film projects, how do you manage to find time for things like meals and sleep?

15. What does a typical day look like for you? Is there any sort of routine? 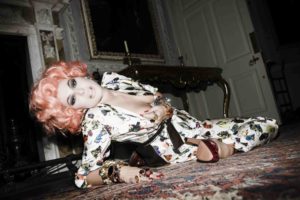 No routine. But I have to be disciplined, for example I have to get my word counts done when I’m in the middle of a novel, I have a weekly training regime, I live by deadlines for shows etc …. But it’s a funny old job, as you know it’s time consuming to design and create shows, and the performances take me all over the world so I travel a lot. I have a low boredom threshold so it probably suits me best that no two days are the same.  I try to squeeze in time in my house in France whenever possible so I can take an afternoon out by the pool to gather my thoughts.

16. What do you enjoy when not immersed in burlesque?

Art. Any kind of art or culture. Although not performance necessarily, I do try to have a break from that. I also like to DJ electro, disco, and soul as listening to 40s/50s music every day drives me round the bend occasionally.

17. Just out of curiosity, how many diamonds adorn your diamond merkin?

None, they’re constructed in China by my costume jeweler who uses cut crystals. Shhh, that’s not very other-worldly is it!

Miss Blaize will be performing for the first time in Texas on March 20th at the Lakewood Theater, as well as screening her new film Burlesque Undressed. For more info on the show, please visit our Events page.