Herstory of the Merkin 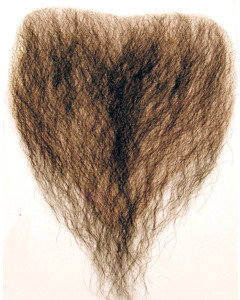 If you thought the merkin was invented to make your lady-business sparkly, colorful or express your religious beliefs, you were wrong! The merkin has a recorded history dating back to at least the 1400’s when it had the less subtle title of ‘pubic wig,’ as documented in the Oxford Companion to the Body.  But hey, weren’t we au natural until like the 1970’s? Wasn’t it was easy back then to hide in the bushes? Don’t tell me Lady Gaga is trying to take credit for this one after that curly bluish merkin she wore at the Much Music Awards in 2011!

This invention most likely goes back to the needs of the world’s oldest profession, prostitution. To put it delicately, beachcombers who had taken long strolls with ladies of the night often found themselves infested with a less succulent bucket full of crabs. The ladies suffered from this sickness of the surf and turf often enough that many of them began to shave it all off and then don a pubic wig for decency’s sake. These pubic wigs were often made from real hair, many times from the hair of the wearer to appear more genuine. Other times they were made from goat hair, horse hair, or hair recovered from corpses.  The wigs could be boiled and cleaned to prevent re-infestation. Not so glamorous now, is it?

There was another common use for the merkin-to hide the fine print. Most STDs were untreatable back in the day, so afflicted prostitutes used merkins to cover up the signs of STDs which would prevent them from working.

The term merkin has a number of explanations, few of which are well-recorded enough to prove to be the true root of the word. Some tie the merkin to the term ‘malkin’ which at the time pubic wigs became a brothel fad, meant a woman of little class, or basically, trashy. Another clue comes about in the 18th century Grose’s Dictionary of the Vulgar Tongue which defines a merkin as “counterfeit hair for the monosyllable.” Still others, refer back to similar terms that mean stormy.  Incidentally, did you ever wonder why the term “beaver” is a nickname for a ladies’ vagina?  You guessed- it goes back to England and the 18th century merkin- which were often made of beaver pelts.

Later as Hollywood began to blur the line of decency in more and more graphic sex scenes, the industry found that many actors and actresses were still not ready to bear all, thus the merkin was introduced during sex scenes to prevent junk from showing or in the case that they no longer have hair, conflicting with the hairiness of the era in which their character lived. Merkins have helped many films escape that pesky NC 17 or X rating.  Many, many actors have worn them when doing frontal nudity, so the joke’s on us, apparently.