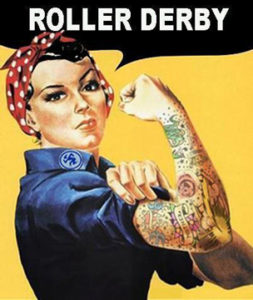 Here we are in the midst of another Depression, and coincidentally at a peak of popularity in the world of roller derby. Why a coincidence? Roller derby, although baring a rockin’ powerful image now, was born as a coed sport during the first Great Depression.

Brainchild of Chicagoan, Leo Seltzer, the sport debuted in 1935 as a nearly marathon race of over 50,000 laps around the rink. A few years later, realizing that violence sells, roller derby skaters got more competitive and physical. Becoming a huge TV hit in the 1950’s, derby female skaters began to become stars of the sport and turned into household names. After its rowdy youth, the sport began to spin its wheels in the 1970’s. Maybe it was disco that took its toll, who knows, but for whatever reason, roller derby athletes hung up their skates.

From time to time I have flashbacks of watching roller derby as a child in the 1980’s with groups like Blondie heading up the entertainment. Is this a figment of my imagination? Did roller derby ever really bite the big one?

Even if it did, there were still believers. So, like many things magical, at the turn of the millennium a group of Austin ladies decided that roller derby needed to be brought back from the dead. Anya Jack, April Herman, Heather Burdick and Nancy Lynn, the She-EO’s as they like to be called, formed TXRD Texas Roller Derby Lonestar Rollergirls, and Bad Girls, Good Women. Their passion for the sport was fierce as they battled their way through hoops, injuries and discord as to how to give birth to a league that would last and win over new fans. The original teams: Putas del Fuego, Rhinestone Cowgirls, Holy Rollers, and the Cherry Bombs and the Hellcats inspired a new generation of skaters, hard-knockin’ ladies and athletes to join up, form teams, and leagues all over the United States.

The local DFW Metroplex scene has a very active group of ladies who skate in the Assassination City league, ACDerby.com. These tough ladies have bouts the third Saturday of every month at Dad’s Broadway Skateland in Mesquite. So, go out and support them!

Dayla Cox, from Flower Mound (Flower Mound seems almost too good of an alias to use), who (although currently on hiatus) skated under the name Trayla Park, gives Pin Curl some insight into the roller derby experience.

For her, the roar of the crowd is the adrenaline rush that makes her skate harder. Of course, there are good and bad nights. Trayla Park still feels guilty about crashing into another girl (who just so happened to be one of the founders) at practice during her virgin days in the rink, leaving her needing pins in her leg. She also has a rival, known as Calypso Crash, who she says is evil. “She knocks people on their asses for the fun of it.”

This is a sport where some are meant to participate and others are destined to be spectators. Yet, according to Trayla Park, roller derby isn’t exclusive to those who wish to join the ranks. Outgoing girls, no matter what they do during the day should try to jab their way in. The more the merrier (until the bout, that is).

Roller Derby today is always open to new skaters, but what they also need is attention to keep support strong, like media attention, the movie, Whip It, directed by Drew Barrymore, and local businesses sponsorship. Even by being a spectator, fans can support roller derby and ensure that it stays a thriving monument to women’s prowess in sports.

Trayla says that, “the derby revival shows that women are fiercely competitive creatures in the sports world. We may use our sexuality to our advantage, but the real draw is the power of competitive sport.”

To see just what the She-EO’s and other ladies went through to bring back roller derby, check out the documentary, Hell on Wheels, or their website, http://www.txrd.com/.