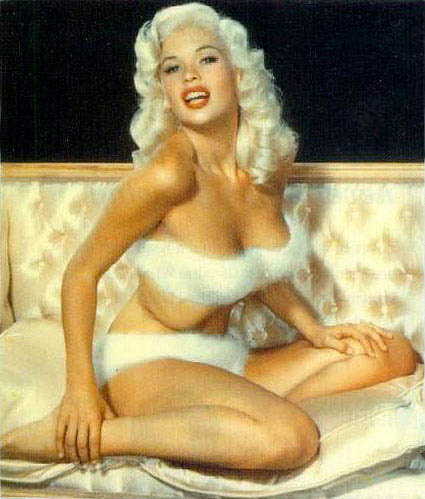 “When I’m 100 I’ll still be doing pin-ups,” said a young, beautiful Jayne Mansfield. Too bad that was not meant to come true. At the still maturing age of 34, Jayne, a passenger in the front of a car with her children riding in back, was killed when the vehicle collided with a large truck on her way back from Mississippi.

Jayne was born Vera Jayne Palmer on April 19, 1933 to Herbert and Vera Palmer. She was a kind and generous child, who always had hope in her heart and stars in her eyes. Yet, those stars dimmed when her father died and Jayne was only three years old.

It was no crime. There was no need for Jayne’s real-life daughter, Mariska Hartigay, who plays Officer Olivia Bennett on Law & Order’s SVU series to investigate. Vera wouldn’t be kept down about it and neither would young Jayne. Jayne married Paul Mansfield in a hurry and gave birth to Jayne Marie Mansfield. She kept the name even after she didn’t keep him. It just sounded right.

Jayne began to work in Hollywood as a model but found that the 1950’s world was a little taken aback by her large chest. But her potential shone through. She liked to say, “A forty-one inch bust and a lot of perseverance will get you more than a cup of coffee-a lot more. But most girls don’t know what to do with what they’ve got.” 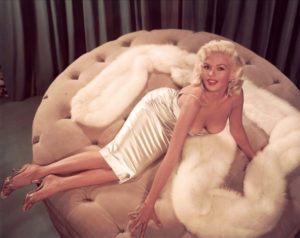 Jayne was working her way up and starting to outshine the crowd when she became distracted by Mickey Hartigay, 1956’s  Mr. Universe. Soon there were three more twinkles in Jayne’s eyes: Micklos, Zoltan, and Mariska. The pair were very dedicated parents who did not let their work take from their children, nor did they let their children take work from them.

Soon Jayne starred in “The Girl Can’t Help It,” and “The Wayward Bus,” as well as “Rock Hunter” and “Kiss Them For Me.” She began to perform at the Tropicana in Las Vegas and was thrilled to be able to have more personal live contact with her fans. She did cameos on television and was up for almost anything the fast lane of the world of entertainment could throw at her. Apparently she did not have room for Mickey anymore, and they divorced.

Jayne had once said, “I will never be satisfied. Life is one constant search for betterment for me.” Unfortunately neither she nor the world can be satisfied by a glowingly beautiful life cut so short. But se la vie, thus is the life of the 1950’s superstar.  Only the good die young, right?