Anytime you text during a class, a conversation, a drive or take a picture of me with your phone or drunk dial me from your butt, thank Hedy Lamarr. Hedy Lamarr, known as the “Most Beautiful Woman in Films” was born Hedwig Eva Maria Kiesler on November 9, 1914 in Vienna, Austria to Gertrud, a pianist and Emil, a bank manager. From early on, she turned heads so hard they ached.

She began her film career early at age 17. By 19 she had already done her first nude scene in the 1933 Austrian film Ecstasy, shaking up the still young film industry as she ran wet and naked through a field after a horse. Eyes opened in amazement at this green-eyed brunette’s stunning prowess and grace, including execs from MGM Studios who couldn’t wait to sign her on. Her first Hollywood film of many was called Algiers in 1938. She went on to star in films like John Steinbeck’s Tortilla Flat (1942), White Cargo (1942), Cecil B. DeMille’s Samson and Delilah (1949) and The Female Animal (1957) and shared the screen with the biggest names in the industry not excluding Spencer Tracy and Clark Gable. 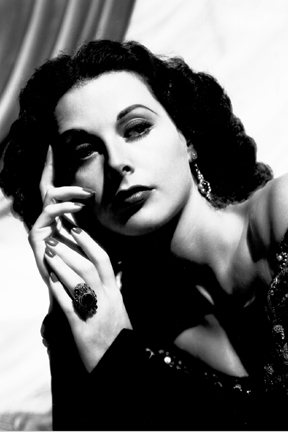 Her personal life, however, was not as glamorous. In fact, Hedy once said “Any girl can be glamorous. All you have to do is stand still and look stupid.” Maybe Hedy was tired of pretending she was less than a genius. Maybe she was tired of losing husbands to their own inferiority complexes. Maybe she discovered she did not have to juggle everything and could choose what was more important to her. Really, it was her decision.

The decision to leave Hollywood and the stupid glamour behind allowed her to devote more time to her children, James (adopted with John Loder), Anthony and Denise (biological parent, with John Loder). She was hardly as successful in marriage, wedding and then unwedding five husbands: Fritz Mandl, Gene Markey, John Loder, Teddy Stauffer, W. Howard Lee, and Lewis J. Boies.

Despite her familial struggles, Hedy’s brilliance continued to shine. She always had a new invention up her sleeve. Her big bang came in 1942. Along with musician George Antheil, she patented something they called the ‘secret communication system,’ a technology which allowed users to change frequencies at will to keep enemies from intercepting messages. At wartime with the Nazis, this development was used to dodge torpedoes and keep intelligence secret. They may not even realize it, but the military and cell phone companies should be paying a little gratitude to Hedy Lamarr.

She wouldn’t be credited much with it during her lifetime, but Hedy would see what her original idea would grow into before her death on January 19, 2000, at her home in Orlando, Florida.  And yes, next time a beautiful dark-haired girl catches your eye as she cuts you off in traffic and you notice she’s jabbering on the phone, you’ll remember Hedy Lamarr.