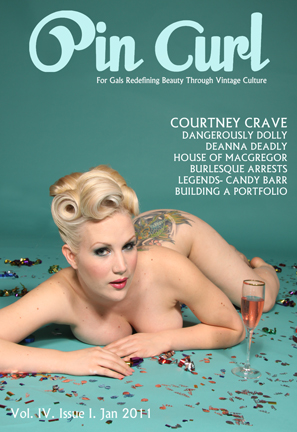 Dallas based pin-up and fetish model and performer Courtney Crave talks Germany, being a klutz, dissecting brains, and body modification. Courtney is performing at Viva Dallas Burlesque’s “Dirty, Sexy, Funny” show on Friday, January 7 at the Lakewood Theater.  We thought a naked gal a much better depiction of “Happy New Year” than an old Father Time, or a baby in a diaper- we hope you agree.

You’re known as the “German Dream Girl,” but not everyone is aware of your background. Where were you born, when did you move to the states and why?

I was born outside of Naples, Italy, in the town Sophia Loren is from.  Interesting factoid, in parts of Italy they prefer to call people by biblical names, so from birth until about two years old everyone other than my parents called me by my middle name, Rebecca.  When I was two my family moved to Germany where German became my first language and I started in the German school system.  I’m really only 1/8 German by blood but since it was my first language and I was raised as a German that’s how I identify culturally.  I moved to the USA in 2002 after only having visited a few times as a kid.  My friends all started moving here for college and I was left in Germany feeling like I was missing out.  I lived between Texas and Germany for four years before settling in Dallas.  I still go back to visit and hope to move back permanently one day.

You spent two weeks in Germany in September, correct? What was on the agenda? What do you find that you miss the most about being there?

My boyfriend, Allen Falkner, was booked to lecture at a body modification conference called BMX.net.  We had been to it before and it’s a really great conference and a nice opportunity to see all our European friends.  I was brought out to do live translation for some classes.  We spent four days in Amsterdam visiting with friends and touring museums.  We saw the Helmut Newton exhibit, Sex Museum, and Torture Museum.  I also managed to chip my tooth at the Rijksmuseum on an exhibit, don’t ask, I’m a huge klutz.  One of our friends there has his own boat so we spent a day drifting through canals, drinking beer and eating cheese, it was amazing.  We spent the rest of our time in Berlin, which I hadn’t been to since before the Wall came down.  I wanted to see some of the famous museums (and not chip any more teeth) and see where the Wall had been.  It was tremendously sad and moving to be there as an adult and understand what was happening while I was growing up there.  Eating good food and drinking beer is always on my agenda.  The things I miss are too numerous to talk about, plus it makes me cry.  I miss my home.  I cried at the airport when we left.

You’re a model, fetish performer and burlesque performer. How and when did you get started in each of those endeavors? How do you feel you have grown as a model and performer over time?

When I was growing up in Germany people were always telling my parents I should be a child model.  My parents, however, had different plans.  They preferred that I live a “normal” life and use my “brain”.  When I moved to the USA I was approached by photographers at a local goth/fetish club.  Some were legit and some were creepy and just wanted to get me naked.  I gave it a shot and discovered I loved modeling.  I was always pulled more towards fetish, I love nudity and stockings and latex and corsets and super high heels.  Modeling for photos lead to modeling in fashion shows which lead to performing.  It all seemed like a natural progression to me.  Adding pinup modeling and burlesque was just another way for me to have fun and add to my repertoire.  I feel like I’m constantly growing as a model and performer.  Different people inspire me and drive me to better who I am and what I do.  I feel like if you aren’t growing why continue what you do?  New challenges are part of what makes this so fun and rewarding for me.  I’ve had help and support from a lot of people along the way and wouldn’t be here if it wasn’t for them. 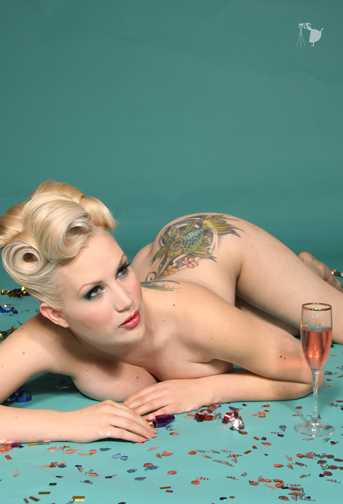 A little known fact about you is that you have a degree in psychology. Tell us more about that.

I have a BA in Psychology.  I managed to get my degree in 3.5 years with a 4.0 GPA in my field.  I had lofty ideas about getting my Ph.D. and forcing everyone to call me “Doctor” but was burnt out on school.  I was taking 21+ hours a semester, that’s a lot of classes.  I’m very passionate about psychology and love research as opposed to counseling or something with direct patient interaction.  I have enough of my own problems; I don’t want to spend all day listening to someone else’s.  I’m much happier dissecting brains of people who have committed suicide or analyzing lab data.

You’re open about the fact that you have OCD. What challenges does that present in your daily life? Do you have any advice for others who live with these tendencies?

I do have OCD.  For real though, not like when people want to impress upon you that they are particular or have an attention to detail.  It’s part of my larger umbrella diagnosis of Tourette’s Syndrome.  Primarily I have very obsessive thoughts about food being contaminated and things needing to be symmetrical (seriously, look at all my piercings sometime).  My TS manifests as multiple tics, I probably have about 30 that I do almost daily.  I’ve had Tourette’s since I was about 9 or 10 so I know how to mask these tics so that it’s not noticeable.  It’s hard to give advice to others with these conditions because everyone experiences them differently.  All I can really say is, be good to yourself and take care of yourself mentally because most people won’t understand what you are going through, you have to be your own advocate and number one supporter.  In that same vein, screw what other people think about your fleeting attention span, need to count things, or noticeable twitches; you have to be okay with you and not with anyone else.

You’re a big fan of vegan baking, body modification and horror films and books. Please tell us a little about each of these interests.

I became a big fan of vegan baking out of necessity.  I am deathly allergic to eggs but also highly addicted to baked goods.  If I wanted to eat pastries I had to either make them myself or risk hospitalization.  Most people assume vegan food can’t taste good and they are always surprised when they find out my cakes they’ve been enjoying are vegan.  I love tattoos and am working on collecting more.  Recently I acquired a full back piece done by Scott Ellis of Triple Crown Tattoo in Austin, TX.  I have so many friends that are tattoo artists that I would love to have work from, I just have to figure what.  I belong to Eerie Books Horror Book Club which meets monthly at the book store.  It’s great because it exposes me to authors or horror genres I might not have read on my own.  And it’s fun to meet with people and talk about what you’ve read together and dissect the story.  My all time favorite horror novel is The Shining by Stephen King.  I read that book in broad daylight and couldn’t be alone in the room with it, if my dad got up and went into a different room I would get up and follow him without ever putting the book down.  I torture myself with horror.  I’m a huge weenie, I’m scared of the dark, I startle easily, and I suffer from chronic nightmares and sleepwalking.  God knows why someone who has to sleep with a nightlight would constantly immerse herself in such horrific things but I do.  I’m sure it has to do with the interesting psychology of the characters.  The more messed up in the head someone is the more I want to learn about them and figure them out.

According to an October Facebook post, you were 13 photo shoots shy of your goal to have 52 shoots this year. Have you reached that goal yet? What are your goals for 2011?

I have to admit, I stole the idea for my goals from another Dallas model, Melissa Meaow.  I’m very close to reaching that goal, which may be the first time I’ve ever accomplished a New Year’s resolution.  For 2011 I’d like to get back to my fetish roots as a model and performer and work more outside of Dallas.  I’d also like to do more publications and covers.  I never share my personal goals; I feel a better sense of satisfaction when I accomplish them if I keep them to myself.  Then I know I’m actually doing them for me and not because I’ll look bad to other people if I don’t.  Plus if my personal goal is to eat chocolate and donuts every day or adopt five new kittens and my boyfriend knew that he would probably try to thwart my efforts.

You can find Courtney at CourtneyCrave.com and follow her at GermanDreamGirl.com for all of the latest photos, appearances, and daily musings. Looking for this month’s Cooking with Courtney Crave?