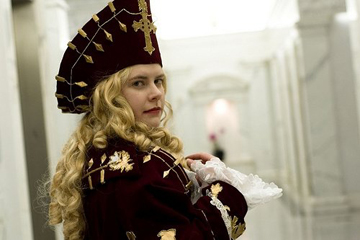 Q: When did you first become interested in costume design?

I was always into dress-up when I was a kid. I think I was doomed from the very beginning to get into historical costuming. I used to layer my dress-up dresses over each other so my skirt would be puffier, like I was wearing petticoats. When I was about 11 or 12, I decided I wanted a really huge, elaborate Marie Antoinette style dress. Of course, I couldn’t afford to buy one, so I set out to learn how to sew one for myself. I took a few lessons from shops and friends, and then just dove in head first. The first dress I ended up making was a simple Regency styled dress, like what’s seen in Jane Austen movies. It all snowballed from there!

Q: Have you always been a geek? (I use the term lovingly)

Hehe, yes, definitely! I’ve been a very devoted Star Trek geek for as long as I can remember. I even used to get into trouble in class because I was reading Sci-Fi and Fantasy books that I had hidden in my desk, instead of paying attention to the lessons. I got into anime later on, and that led to anime cosplay, where you dress up as your favorite characters for competitions, meet-ups, and photo shoots.

Q: Did you take formal training?

Well, sort of. I took lessons at a local sewing shop for about 6 weeks, during which we only managed to make a single vest. Instead of enrolling in the next set of lessons, I took a couple more lessons from a friend’s mom, and after that I started to teach myself. It was definitely a bumpy start, and the first skirt I made on my own was absolutely horrendous, but I was determined!  I learned a lot from online sewing sites, back in the days when online bulletin boards were a good place to get information and help on projects. Thankfully, there were some really great sites, which are still around today, like Marquise.de and The Elizabethan Costuming Page, which had great tutorials, pictures of extant period garments, and reference pictures. I’ve used those sites as references for at least 10 years, and still go to them whenever I need a jumping off point on a new historical costume. 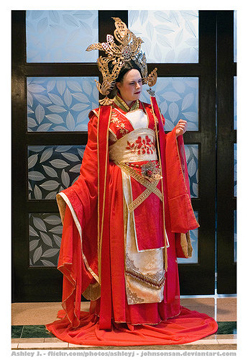 Q: What was your proudest moment as a seamstress?

This September, a friend and I competed in a local costume contest and ended up winning “Best in Show”. I had never felt quite as giddy! We both had put so much work and time (and blood and tears!) into our costumes, and it was a really proud moment for both of us.

Q: What’s the most complicated costume you’ve made?  Most fun costume?

The most complicated costume was probably for a character name Cardinal Caterina Sforza from an anime series called Trinity Blood. Admittedly, I probably made it much more complicated than it needed to be, but I wanted to get every detail perfect. It ended up taking quite a bit of time (and sanity!), but the end result was more than worth it. As for the most fun, I love crafting anything that has a large headdress, or some armor! My last costume had this gigantic gold headdress, which was hugely detailed and had at least twenty different pieces. I made it out of craft foam and dimensional fabric paint! I did the same thing with some plate armor for another costume, where I used different thicknesses of craft foam to create detailing and designs. I think I really just like playing with craft foam.

Q: I know you did some costume work for an MTV awards ceremony a while back, if you could costume any celebrity who would it be and why?  If you had your pick of any film or television series to do costuming for, who which would you choose and why?

Oh, wow, that’s a good question! I’d love to do some costuming for Jennifer Ehle. She’s such a well known actress for period films and she has a great figure. I’d also love to do something for Kate Winslet. I love the characters she’s played, and she’s absolutely gorgeous.
For film and TV, I’d love to work on a period piece set in the 1750s-70s. It’s still one of my favorite eras. I wouldn’t mind working on the next installment of the Sherlock Holmes movies, too! Bustle gowns, gadgetry, all the Steampunk-esque elements, what’s not to love? 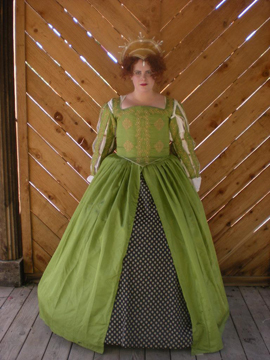 I recently learned about this stuff called ‘Styrospray’, which is used in construction and insulation. It’s basically a hardener for foam materials. I’m really excited to try it in prop and armor making. I’m rather scared to try my hand at working with fiberglass because it’s such a mess and has such a small work time, so the Styrospray is a great alternative. It has a much longer work time (24-48 hours vs. the 5-7 minutes of fiberglass), you don’t have to embed anything in it like fiberglass cloth, and you can clean it up with soap and water while it’s still wet. It’s really exciting stuff!

Q: What should readers look for in quality costume construction?

Look for well finished seams.  They don’t necessarily have to be surged as long as they are finished off nicely with an edge stitch or some pinking. Make sure your costume fits you well, and doesn’t hang off you like a potato sack, or is tight enough to show any unflattering rolls or bulges. If you don’t provide the fabric for your costume, then make sure your seamstress will be working with quality materials. Some commissioners will use cheaper fabrics to save money, but the end product may not be as nice. Avoid things like panne/crushed velvet, cheap costume satins (shiny=bad!), and acetate velvets.  Fabrics made from natural fibers not only look better, but they breathe better, too.