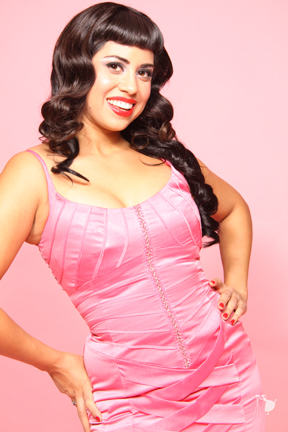 We last spoke with Austin-based Coco Lectric back in November.  Since that interview, she has gone on to win the Title of Texas Performer of the Year, “Texas Burlesque Ambassador”, and will be performing later this month with none other than Dita Von Teese.  We certainly have a lot of catching up to do, and were honored when Coco took time out of her insanely busy schedule for an interview with us.

Q: Since we last interviewed you in November, so much has happened!  First, let’s talk Hot Rods and Heels.  You won the Texas Performer of the Year title, and The Jigglewatts won for Texas Troupe of the Year.  Tell us a bit about the evolution of your work over the last nine months.
The last nine months has been a pretty wild ride. I’ve done more producing than I ever have. We opened the year with a Tribute to Bettie Page which featured The Jigglewatts and Dallas performers, Ginger Valentine and Elisa and other amazing Austin girls. Miss Ruby Joule and I have done a lot more traveling as well; we performed in Albuquerque at the Southwest Burlesque Showcase and in Bustout Burlesque in New Orleans. I performed in Chicago with Michelle L’Amour and her Chicago Startlets in Chicago for “Stripper’s Holiday” in April.

Dallas made reaching my goal of getting my name out there because I got the opportunity to perform in shows with Catherine D’Lish, Perle Noire, Angie Pontani, and my personal favorite, Dirty Martini. I’ve also made festivals a priority this year because, not only would a title or two be wonderful, I get to learn from and become closer friends with some of my favorite burlesque performers and legends. Networking is so important in burlesque world, I mean, sharing one’s performances is kind of the point, right? Performing with other folks from all over the world that make burlesque a priority widens the net of potential audience members and fans.

Q: Right after Hot Rods and Heels, you were off to Vegas to be the only Texas performer given a performance slot at the Miss Exotic World Showcase, part of Burlesque Hall of Fame Weekend in Las Vegas, becoming our “Texas Burlesque Ambassador”.  Tell us about that experience.

Being the opening act for the opening show was an honor. So many attendees told me how much they enjoyed my number and I attribute a lot of that to being the first one on stage. The audience was absolutely incredible and attentive and spent their hard earned time and money to get to the venue, so they were ready for a good show. I was SO ready to give it to them, I’d been saving up my adrenaline for that night and can honestly say that when I walked off the stage, I was content. I even got to give Perle Noire the eyes during a glove peel. She responded ecstatically! Being the “Texas Burlesque Ambassador” this year was an honor but it also brought about a new set of responsibilities. So many amazing performers here submitted applications and I was shocked that I was the only one to get in. I was nervous that if my performance wasn’t so great, they really wouldn’t take Texas seriously. I’m hoping I made a big enough splash this year that they consider more Texas performers next year.

Q: The Jigglewatts are headlining at the Lakewood Theater on July 2, and then you are off to New Orleans to perform with none other than Dita von Teese at Tales of the Cocktail. Can you tell us which number/s you are doing?  Are you more nervous or excited?

I’m performing my Big Red Boa number in Dita’s show. I’m very excited about performing with her and I’m doing the long version of the song, which is what I’m most comfortable with. I’m mostly nervous that I won’t have enough rhinestones on my outfit!  But seriously, I am a little nervous about performing for an entirely new audience. Most folks come to burlesque shows because they love burlesque. Dita von Teese’s audience comes to the show because they love Dita, I hope they have enough room in their burlesque hearts for a full-bodied Texan with a tan. 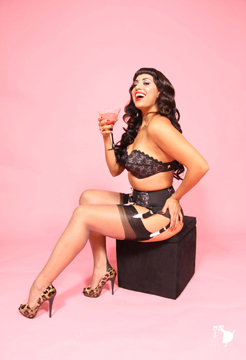 Q: Your four month whirlwind lands you back in New Orleans in mid September to compete for the title of Queen of Burlesque at the New Orleans Burlesque Festival.  Last year’s competition featured an amazing line-up including burlesque super stars like  Perle Noire, Catherine D’ Lish, and Lola Van Ella.  What was your reaction when you were asked to compete?  What is your view on competition in burlesque?

I was absolutely beside myself thrilled when I found out that I’d be competing in the Queen of Burlesque competition this year. I really want to bring something fresh, new, and a little naughty to the show this year. There is just something about performing with a live band that gets my toes curling. I actually kind of enjoy competition in burlesque, it makes me want to improve my craft and do my homework.

I’ve always been a little bit aggressive when it comes to my talents, though. If I weren’t competing with other bombshells, I’d be competing with myself. It really is difficult for a panel of judges to make a decision of who has the best act though, burlesque is like comparing different fruits. No one is selling the same exact gimmick and everyone likes something different. To be honest, I don’t really know how to compete well with other performers, there’s never a level playing field and most of us are playing different games any way.

Q: In the midst of all this, you also managed to complete your master’s degree, be a single mom, and hold down a personal relationship.  How do you manage to do it all?
Wow. That really makes it sound like I’m busy, doesn’t it? The short answer is: I don’t know. I take things one moment at a time. I follow my passions and I try to temper everything with common sense and logic. My degree will open a lot of doors for me in the future, but it has taken a back seat to everything else. There are a lot of things I know I need to do right now. I need to focus on burlesque right now. I need to be a good mom right now. I need my boyfriend right now…wait that’s not what it sounds like!

On a more personal note, I only get the chance to be a great mom once. I know how important my influence is while he’s young and he is my top priority. My boyfriend has been a great support in my life, artistically and emotionally. We’ve known each other for years and I still get butterflies when I know he’s in the audience. I follow my heart and my gut in all matters of my life and, to my great surprise, I find myself where I belong.