If I had to come up with the recipe for Candy Barr’s candy bar, it would have to include coconuts, white chocolate, ruby red frosting, some illegal substances and a dark gooey and mysterious center. Oh, and it would have to have some pot somewhere in there too. Why? Well, these ingredients, in the right combination would be the story of Ms. Juanita Dale Slusher, a. k. a. Candy Barr’s life.

Juanita was one of our own, a Texas girl, born on July 6, of 1935 in Edna of humble beginnings. She was barely into her teens when she made history as what some would say was the first ever pornographic movie. She was only 15 at the time. Some say it was willingly, others say it wasn’t. Needless to say, Smart Aleck (1951) isn’t exactly available on Netflix to decide for yourself.

At that point, she was still Juanita Dale Slusher. Her dark center was there, but she was still working on her sweet exterior, what would earn her the stage name Candy Barr and the adoration of many.

A short time later, she began working at Dallas’ own Weinstein’s Theater. Weinstein saw that with the right wrapper, Slusher could be a sensation. He encouraged her to become a blonde and named her Candy Barr.

Candy had undeniable appeal and signature talent, known for her spicy and risqué cowboy outfits and for her association with gangsters and bad boys. She later worked as a dancer at Jack Ruby’s Las Vegas Club. Unfortunately for her, Ruby had a dark center himself, later becoming infamous as the man who gunned down Lee Harvey Oswald before his trial for assassinating President John F. Kennedy. Candy was interrogated about her association with Jack Ruby after the assassination, and cleared of having any prior knowledge of the events.

Despite her innocent name, it seemed Candy Barr just couldn’t stay out of 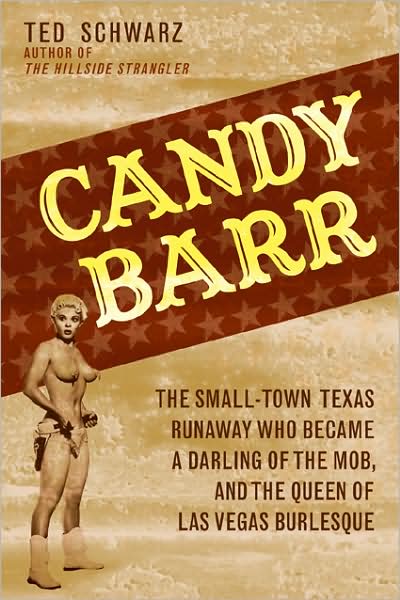 trouble, with or without a bad boy on her arm. She apparently had a taste for pot brownies, just without the brownies. She was busted for possession more than once and even spent time within the notorious prison walls of Huntsville in 1959. Huntsville’s Prison Museum features a Candy Barr in their most infamous inmates display to date. Ironically enough she did time for the brownie-less pot brownies, but not for shooting a violent husband.

She was highly successful as a pinup model for pretty much every magazine there was in the 1950’s and danced everywhere from Dallas to Los Angeles to Las Vegas. She married and divorced multiple times then going on to be the true arm Candy to gangster Mickey Cohen as well.

Then like many entertainers, she went back to her roots, went underground and lived quietly during her later years working regular jobs and blending in with the crowd. She tired of the attention and just wanted to be herself again.

So that is exactly who she was, herself, right up until December 30, 2005 where she succumbed to pneumonia in Victoria, Texas.