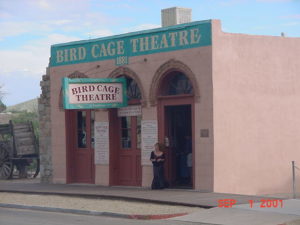 With summer travel season upon us, we decided it was the perfect time to start this Monthly Feature that we’ve had in our pockets for a while now. We will feature a new Burlesque Haunt every month. Have a local legend of haunted theaters, celebrity burlesque ghosts, or the like? Shoot it over to editor@pincurlmag.com we’d love to hear from you!

Sounds of laughter, yelling, and music are heard and the smell of whisky and cigars fills the air, silhouettes of ladies in late 1800 period costumes walk the balcony- –only problem is — no one is in the theater — no one living at least. These are the claims from many visitors to The Birdcage Theater, which is now a museum and free of alcohol, smoke, and sadly — performers.

The Bird Cage Theater opened its doors in 1881, only to close them in 1889. During the eight year run, it was home of the longest running poker game in history, pool sharks, vaudeville and burlesque stage performances, and of course — working girls. Twenty dollars would by a bottle of whisky and a gal for the night; you had your choice of any gal displayed in their seven foot tall bird cages. The theater was open 24/7- even on holidays. The New York Times called it, “the wildest, roughest, wickedest honky-tonk between Basin Street and the Barbary Coast.” Doc Holiday and Johnny Ringo had the infamous “handkerchief dual” in its gambling hall, and with patrons like this; it’s no wonder the theater saw a reported 26 deaths in its eight years.
The Bird Cage Theater was empty for decades, until it was reopened in the 1930s in an effort to preserve the history of Tombstone, Arizona. Today it serves as a museum and the tourism center of the town. Ruth, who works at the modern day Bird Cage Theater, shared her personal experiences with me by phone.

Almost everyone who works here has had an experience of some kind with the “Lady in White”. I myself have seen her. She came down the stairwell and into the poker room. She wore a white dress and a white bonnet. She stood in front of me for a very long time without reacting to my presence at all- it’s like she didn’t even know I was there. She’s what they call a “residual haunt”. No one has ever identified who she is. A bonnet indicates she was a proper lady, and no proper ladies ever came in here. Most of us who work here think she came in with the hearse and is now trapped here.

Two notable paranormal research teams have conducted investigations, one being TAPS (yes that TAPS, of the Sci-Fi channel) and Southwest Ghost Hunters Association. The latter visited the venue three times, and each time had a semi- interesting story to tell. The SWGHA reported high EMF spikes, noting that the stairwell was the area with the most activity. On the third trip, the team noted cold spots that were ten degrees colder than their surroundings, and batteries draining completely and immediately, in addition to the EMF spikes of earlier tours.

TAPS, on the other hand, had more startling “evidence” to share. Jason and Grant hear cards being shuffled and a hard rubber ball being bounced in a back room. When they go to investigate the noise, they catch a shadow that they are both unable to debunk, and unable to explain. In the auditorium, Brian and Steve smell perfume, hear noises, see shadows, and have one of their heavy electrical cords taken off of the bell it was wrapped around twice and drop to the floor. Everyone sees the Woman in White on the stairs, and when separated, they all describe the exact same vision. What was the official conclusion according to TAPS? This place is haunted.

Tips for your trip: Take a photo of “Black Mariah”, the hearse that was used to take bodies to the Blue Hill Cemetery, which is now parked inside the museum. Visitors sometimes have a figure appear behind it in the photograph.