With summer travel season upon us, we decided it was the perfect time to start this Monthly Feature that we’ve had in our pockets for a while now.   We will feature a new Burlesque or Pin-Up Haunt every month.  Have a local legend of haunted theaters, celebrity burlesque ghosts, or the like?  Shoot it over to editor@pincurlmag.com we’d love to hear from you! 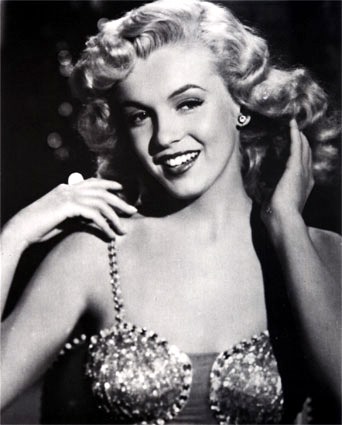 The Ghost of Marilyn Monroe, Hollywood

The Roosevelt Hotel was made infamous in the late 1920’s as a mecca and safe haven for Hollywood stars and starlets.  The first ever Academy Awards was hosted in its Blossom Room and Shirley Temple took her first tap dancing lesson on its stairway.  Yet what is the reason that most tourist come to check in at the Roosevelt in the summer?  A chance to see the ghost of Marilyn Monroe; who is said to appear the most during the summer months between her June 1st birthday and her August 5th death.

At the height of her fame, Marilyn resided in room 1200, a poolside suite, and the legend of her ghost at the hotel centers around a mirror that was in that room.  The claims of seeing her apparition in that mirror were so prevalent, that the hotel could not accommodate all of the booking for room 1200, and decided to move the mirror to the lobby, where more hotel guests could get a good look.  Miss Monroe isn’t the only ghost reported to still frequent the hotel; it is said Montgomery Clift (appeared in The Misfits with Monroe) also prefers to hotel to whatever is on “the other side” and still frequents his old room- room 928.

Oddly enough, the Roosevelt Hotel is not the only place sightings have occurred.  There are two more locations that have much interest and intrigue for Marilyn fans and ghost hunters alike.  Her Brentwood home, the only home she ever owned and the site of her overdose in 1962, is also said to be a hot spot for frequent visits by the ghost of Marilyn Monroe.  The house is located on Helena Drive, but the current owners to not take kindly to strangers flocking to their residence.  They have surrounded the property with a high fence, and do not take lightly to folks snooping around.   Apparitions, mists, and shadows are the reports from the few who claim to have been allowed to investigate.  There are also claims of passersby and tourists seeing apparitions of her appearing on the front porch as well.

The final claims are from visitors to her crypt at Westwood Village Memorial Cemetery.  Everything from sightings of Marilyn floating over her tomb and seeing her walking along the wall, to tiny green orbs darting around has been reported.

Tips for your trip: Due to the insane popularity of this ghost story, there is a lot of wacky information on the interwebs including a claim from one of Marilyn’s “ex-husbands” that the late Anton LaVey, Founder and former High Priest of The Church of Satan, guided him through a Dark Moon ritual that result in her resurrection. People are nuts about Marilyn.  Stick to the Roosevelt Hotel for your ghost hunting trip. It’s your best bet as it has a ton of claims about all sorts of famous ghosts and it is the safest location to go snooping, as it is very public. When you make the pilgrimage to the Roosevelt, you’re going to want to check out the mirror located by the elevator on the first floor.