If you’re planning on heading down to Austin for the Texas Burlesque Festival this month (which we recommend) you may want to consider staying at The Driskill hotel for some extra kicks.  Fans of all things vintage just might have an intimate encounter with history via one of the numerous ghosts known to haunt The Driskill.  A “landmark of legendary Texas hospitality,” the place is so lavish and lush that some guests choose never to check out. 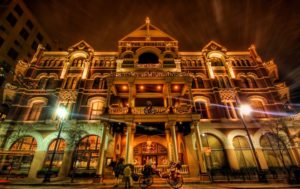 The Driskill was built by wealthy cattle baron Colonel Jesse Lincoln Driskill.  Its architectural splendor was matched by its advanced technological luxuries and was the first hotel south or west of St. Louis to boast electric lighting.  The very first long-distance call ever placed in the city of Austin was from the lobby of the Driskill, and the hydraulic elevator and elaborate bell system that enabled guests to ring for room service made it a luxurious place to stay in 1886.  Thanks to the Austin Heritage Society and many concerned citizens, the structure was saved from the wrecking ball and remains not only a State Historic Landmark, but a luxurious place of lodging to this day.

Ever important to Austin’s social scene, the hotel is located right on the infamous 6th street, and during Prohibition it housed the finest hideaway in all of Austin.  The Driskill has been dubbed ‘the living room for Texas politics’ and indeed, not only have the politically powerful gone there to meet and drink, but the Texas Senate convened at the hotel for about a year during the construction of the State Capitol.  Rumor has it that the Texas Rangers even hatched the plan that would be the demise of Bonnie and Clyde while sitting in a suite at The Driskill.  It’s also considered by many to be Austin’s most haunted building as well as the most haunted hotel in the state of Texas.

Due to a tragic accident on the stairs, the first resident ghost of the hotel arrived in 1887 while the Texas Senate was in session.  The daughter of a senator, the little girl was back within the week and has never quit playing and bouncing her ball in the 1st floor lobby and the 2nd floor ladies’ room.  The Driskill is still home to its namesake, Colonel Driskill, as well, whose face you can gaze upon in the lobby thanks to a portrait painted in 1890.  Don’t worry, he won’t be showing his face any other way, although if you smell a cigar and no one’s smoking or an unseen force becomes interested in your bathroom lights, he may be nearby.

But don’t get Colonel Driskill confused with Colonel Peter Lawless, who also haunts the hotel.   A resident of the Driskill hotel for around 31 years, the retired railroad man stayed on thereafter and has been seen by several, usually checking his railroad watch while waiting for the elevator.  A woman driving a bus recently had to slam on her brakes at the intersection of 6th street and Brazos when a man wearing “old time clothing and carrying a watch on a chain” appeared in front of the bus, only to disappear again.  If you happen to see him, he’ll probably just turn and walk off through a wall, although hauntedtexas.com notes that he is an unusual spirit as he will look at and acknowledge the living. 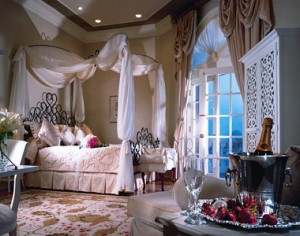 There is one room of the Driskill that has been known to steam up as an invisible roommate takes an imaginary shower and you may even find some scribbles on your notepad.  Guests in another room have had their luggage rearranged while they slept and once a cheeky phantom decided to choose Annie Lennox’s outfit for the evening while she was showering.  In a friendly fashion, the alternate outfit was hung neatly in the closet.  The same ghost has a reputation as a ladies’ man and has been known to make advances on single ladies.

The most mystifying room, though, is 525, which went unused for years.  Legend has it that two brides, 20 years apart, had committed suicide in the bathroom, but whatever the reason, the bathroom door was bricked up until 1998 when renovations brought about a smattering of paranormal activity.  The paint peeled from the walls, the air conditioning defied science, and most alarming, the tub turned out to be full of water with seemingly no way of it getting in there.

The ghosts of The Driskill really seem to be a kindly bunch and for some of them, the party just never ended.  Banquet manager Arthur Cicchese once heard inebriated laughter erupting from the elevators at 6am and then a whole group laughing around him in the hall after the elevators had both opened, although none of the merrymakers was visible.  As the author of Ghost Stories of Texas, Jo-Anne Christensen, puts it, the Driskill embodies “the true ‘spirit’ of southern hospitality.” 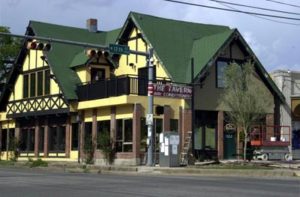 If you still haven’t had your fill of ghosties, head on over to The Tavern, rumored to have been  a speakeasy and brothel during Prohibition.  Located on West 12th Street and Lamar, The Tavern is home to ‘Emily’ who is enjoys the peaceful mornings at the bar and has been known to change channels on the television and occasionally break a glass.  The staff doesn’t seem to mind, though- they’ve named a liquor cabinet after her!  Emily has also been seen standing in the window with a little girl who may or may not have been her daughter, and staring out across the road, to the gas station.

Or, you could just camp out at the Capitol hoping to see the mysterious lady in the red dress.  Whatever your itinerary looks like, April in Austin is sure to be spectacular, and maybe even a bit spooky.