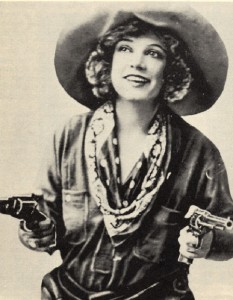 A self-made woman, ‘Texas’ Guinan created a mythology around herself, much like Mae West or The Great Ziegfeld.  It’s hard to tell how much of her autobiographical storytelling is based in truth; as Tex said herself, “Exaggerate the world!”  What is definitely true is that Texas Guinan was a character, a cowgirl, a silent film actress, a syndicated newspaper columnist, ‘Queen of the Nightclubs’ during Prohibition, and a natural-born hustler.

Tex was born in Waco, Texas in 1884, and given the name Mary Louise Cecilia Guinan.  Raised with the social grace of the Victorians, she still turned out to be a tomboy and a troublemaker at her Catholic school.   Tex was a full-blooded Irish and a force to be reckoned with; it seems that she most always did exactly as she pleased, and what pleased her most was adventure.  She told tales of joining the circus as a young girl and, being an excellent trick rider, they may have been true.  Her skills as a horsewoman certainly served her well in tinsel town.

After spending some time as a socialite in Denver and two years married in Chicago, Guinan took off for New York City to make a career for herself.  Her big personality and quick wit made her a vaudeville star in no time.  Then, during WWI, she toured France, entertaining the troops, after which she relocated to Los Angeles to make a name for herself in the movies.  Eschewing the traditional female dichotomy of roles (damsel in distress or femme fatale) she brought her own boisterous character onto the big screen, and made two-reel westerns where she was a heroine and rootin’-tootin’ cowgirl, but also a romantic. 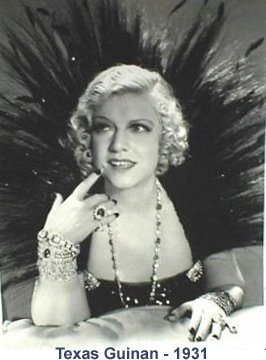 After years of a successful film career, and less successful production company, Tex tired of the cinema life and returned to the lights of Broadway.  With Prohibition now monitoring the city’s night life, it didn’t take Tex long to find a new niche.  What began as merely outings for her and her showbiz friends, evolved into a hostessing position, and before long, she had a partnership with a bootlegger in her own nightclub.  In fact, she played a big part in the development of the modern nightclub.  With a $6 cover charge and $1.50 drinks (in the 1920, mind you), it’s no wonder Tex coined her infamous phrase, “Hello Suckers!”  Although Tex herself was never a drinker, she could spot a good business opportunity, and put Prohibition to work lining her pockets.  A brassy blonde with a big heart and a big mouth, the customers warmed up to her easily, and she was quick to learn every patron’s name.  She said, “A nightclub hostess – if she is successful – should make people forget they have homes.  This proves the old theory that an indiscretion a day will keep depression away.” Tex’s easy banter even turned police raids into just another dog and pony show.  The frequent raids and closing of clubs also spurred her to produce a Broadway show, Padlocks of 1927.

But she couldn’t’ keep the cops at bay forever – in 1928 she was jailed as part of the biggest nightclub raid in New York history, and was charged with being a public nuisance.  However, a couple of the arresting officers had been frequenting the club, on the taxpayers’ dime (doing undercover work, of course) and the charges against Tex were dropped.  Soon after, she filmed Queen of the Nightclubs, cementing her status as a Prohibition legend.  She later stated, “I have been credited with much and charged with plenty…Whenever they have a new law they try it out on me.”

Although she passed away in 1933, just one month before the repeal of Prohibition, she was known to say, “They will have to padlock my coffin if they expect to keep me in it.”