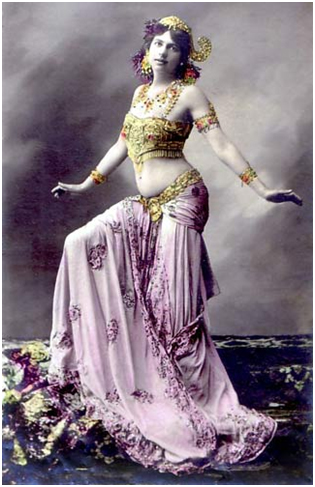 Mata Hari, the Most Infamous Spy that Never Was

Her greatest crime was her ambition; her foolish pride proved to be both her virtue and vice.  Mata Hari lived in an era when the world would be forever changed by ‘the war to end all wars.’  Parisians had been riding high on a wave of gaiety in the emerging modern age, intoxicated by opium and orientalism, the spider woman and the Salome craze, and the fervor of unbound flesh that came along with it.  But it was not to last; The Great War brought everyone back down to earth with startling disillusionment.  Unfortunately, Mata Hari was unwilling to let go of her dreams of grandeur and did not accept the sobriety of a new age, thus landing herself, inextricably, in a situation which was much direr than she ever realized.  The year 1917 found her not only arrested, but condemned to death by firing squad for crimes she most likely never committed.

Margaretha Geertruida Zelle, born in 1876, was always a proud and spirited girl who wished to bring attention to herself.  After a tumultuous marriage to the stormy Rudolph MacLeod, which caused her a good deal of humbling heartache, she hightailed it for Paris.  Due to the despicable circumstances of her marriage, she had little choice but to leave her daughter behind and was never allowed to see the girl again, though she did try.  Even the letter written to her child on the day of Margaretha’s execution remained sealed in her dossier, which was not scheduled to be opened for 100 years.

Margaretha made a bold move for a penniless woman when she arrived in Paris and checked in to one of the most expensive hotels in town.  She cleverly used what she had picked up while living with her military husband in Java and Sumatra to cloak herself in exoticism, creating a new identity as the Javanese temple dancer Mata Hari.  Belle Epoque Paris was more than willing to believe this charade and her love of men and military uniforms quickly made her not only a sensational performer, but an extremely successful courtesan, as well.  Meaning ‘eye of dawn,’ Mata Hari performed her stripteases in the homes of the wealthy, famous, and powerful all across Europe.  Depending upon her venue and audience, she would sometimes wear a nude bodysuit and sometimes nothing at all; however, she never removed her trademark bejeweled breast plate, not even for her lovers.  The truth is that she was displeased with her small breasts and large areolas, but she often claimed that it was because her violent husband had bitten off both of her nipples in a fit of rage. 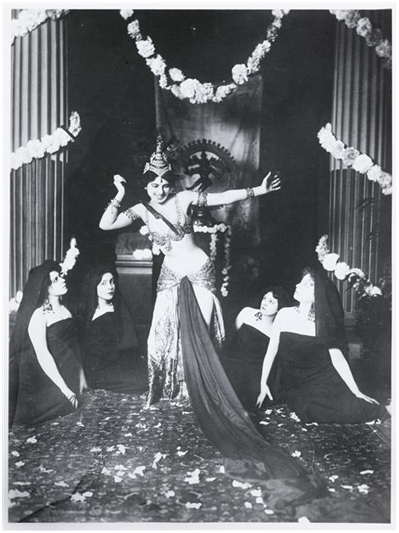 Enjoying fully the freedoms of her existence as a fallen woman, Mata Hari took on lovers from all walks of life.  She claimed that in her ‘sacred dances,’ “I offer everything and finally myself to the god – which is symbolized by the slow loosening of my loincloth, the last piece of clothing I have on, and stand there…entirely naked.”  Surprisingly, she was never arrested for a lewd performance, only on trumped up espionage charges.  Initially, those who were suspicious of Mata Hari were merely offended by her insistence on continuing to represent herself ostentatiously in the midst of war and fearful of her influence with men of power and position.  Times were changing for women and the pendulum of patriarchy had swung back to once again condemn women who dared to live too largely, rather than admire them.

Sadly, Mata Hari was oblivious.  She seems to have lived in a dreamworld, perhaps convincing herself of the character history she had been selling the public for years.  Having no idea that the French and British were already keeping tabs on her, she was first approached by a German officer to pass along any useful information she might happen to pick up.  In need of money, she accepted the offer, without really intending to do anything but go on about her own business of self-promotion, as if it was nothing more serious than deceiving one of her many lovers.  Her worst mistake, though, was to fall in love, for the first time ever.  The young man, a Russian officer, was wounded in the war and, in desperation, Mata Hari also agreed to spy for France in order to earn enough money to end her career as a courtesan and marry her lover.

Mata Hari’s grand scheme was anything but subtle; she set out at once to seduce an old lover, the crowned prince of Germany!  After that matters only became further convoluted when she was mistaken for an actual German spy, Clara Bendix.  Mata Hari was interrogated at Scotland Yard until she spilled the story of her agreement to spy for the French officer, Georges Ladoux.  British Intelligence, however, had been alerted by Ladoux himself, over a year previous, to keep an eye on Mata Hari!  Naturally, this made him look rather foolish and only furthered his distrust and distaste for Mata Hari, and he set out to bring about her ultimate demise.  Caught in the crossfire of wartimes, Mata Hari was made a sacrifice.  Her arrest and execution was touted by both Britain and France as a great success in the war effort, and by Germany as a great example of the folly of the Allies.  Her trial was anything but fair and the evidence given against her was circumstantial at best, yet she maintained her poise and dignity to the bitter end.

Living out the last months of her life in a filthy cell, Mata Hari’s letters went undelivered and her pleas unheard.  Her trial was a closed, fly by night procedure, with no press coverage permitted, and those who could have testified in her defense were not allowed to do so.  Destitute, imprisoned, and abandoned by her slew of admirers, she wrote, “I will defend myself and if I must fall it will be with a smile of profound contempt.”  Mata Hari held her head high and, when faced with a firing squad comprised of twelve soldiers, she refused the blindfold, choosing instead to look her executioners in the eye.  She did not flinch until hit by eleven bullets, as one of the men had fainted.  Whether it was just for good measure or just one final insult, an additional bullet was put in her head; no one claimed her body, and she has no grave.  Mata Hari may have come to an untimely and unjust end, but she lives in infamy, immortalized as the most famous spy seductress of all time.