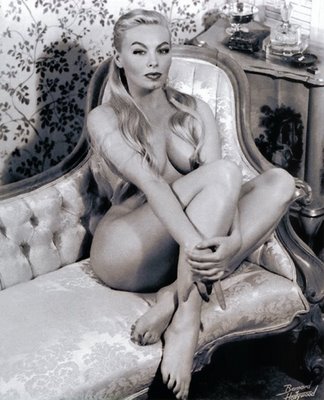 This month’s installation of Burlesque Arrests illustrates the ongoing decency debate through the life and trials of Lili St. Cyr, billed as the Anatomic Bomb.  Lili, a sophisticated chanteuse, played quite a part in elevating the art of the striptease from a solely burlesque house existence to one on the glitzy new stages of Las Vegas.  Miss St. Cyr dressed and undressed herself very finely, testifying in 1951that she currently had $4,200 invested in her costumes and $11,750 in her props!  After retiring from the stage, she went on to open her own line of high-end, mail-order lingerie like the garments she wore onstage; packages were delivered tantalizingly marked “Intimate Secrets by Lili St. Cyr.”

As a burlesque queen, Lili St. Cyr reigned over Montreal’s thriving nightclub scene for most of the 1940s, but in the early 1950s, a campaign to clean up the nightlife was sweeping the city.  Religious groups began protesting about Lili’s show, claiming that “a stench of sexual frenzy plagues the theater the whole time this dancer’s exhibition lasts” and demanding that the authorities ban any shows given by her in the city of Montreal.  Although the police initially observed her performances at The Gayety and decided there was no cause for action, public pressure eventually drove officials to re-examine the existing laws dealing with performance and public morality.  As a result, Lili received a summons to appear in court to “answer charges under a section of the Criminal Code dealing with offensive, immoral, or indecent exhibitions,” in 1951.  The evidence offered against her was rather flimsy and Miss St. Cyr was acquitted, with the judge noting, “It seems to me that those who made the most noise here today were persons who didn’t even see the performance complained of.”  As Lili herself told a reporter, “everyone has a right to his opinion, but a lot of people are prejudiced who would not be if they could see my act.  I don’t like vulgarity – I think it is ugly – and on the burlesque circuit they think I’m high-hat.” 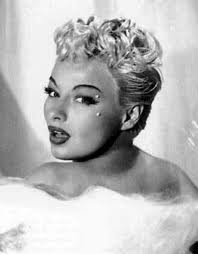 Naturally, the brouhaha only served as publicity for her, as is usually the case with these matters.  The victory was celebrated in an article from Commerce Montreal, which described Lili’s performance thusly: “With a sparkling light she executes the most fantastic dances of eternal theme…She gives a wake-up to adolescence, a stimulant to the young man, comfort to the middle-aged man, sweet memory to the old man…Lili is the goddess of love reincarnate.”  The article also warned that if the reformers triumphed the city would not only lose its reputation as the capital of nightlife, but millions of tourist dollars as well.  Unfortunately, the Commerce’s advice went unheeded, The Gayety was shut down, and Lili St. Cyr moved on…to Las Vegas.

That same year, the Special Committee on Organized Crime in Interstate Commerce led an investigation on political corruption, the Mafia, and its connection with strip joints.  As the U.S. drifted out of war times and into the family-focused fifties, public consensus about decency took a conservative swing and the pin-ups and burlesque dancers who had been praised for helping to win the war were now being told to cover up.  Even Sin City wasn’t yet ready for St. Cyr; her act was in interrupted at El Rancho and she was arrested in September of 1951.  She was let out on $1,000 bail, skipped her hearing, and hoofed it to Los Angeles. 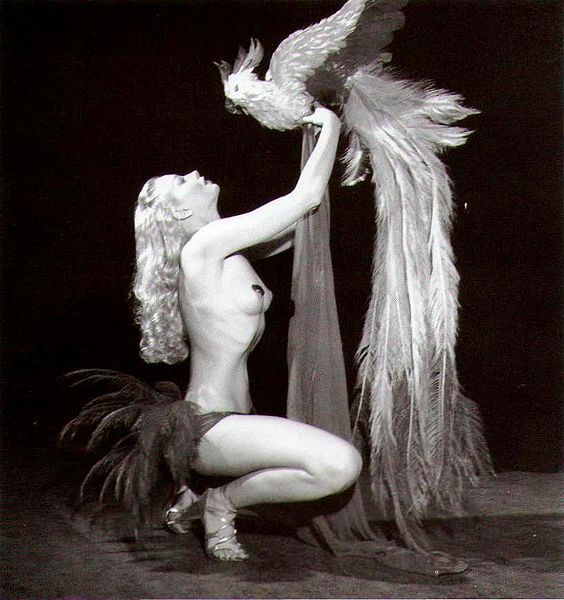 In L.A. Lili had been headlining a swanky Hollywood club, Ciro’s, where she entertained the likes of Dean Martin, Ronald Reagan, and Humphrey Bogart with her famous bubble bath, even selling her own line of bubble bath in the gift shop.  Although Lili kept herself covered by bubbles, a bath towel, or her ladies’ maid, there were those who took umbrage to her act.  In October 1951, club owner Herbert Hover and Lili St. Cyr were arrested, and her g-string and net bra seized for evidence.  The charges were giving an indecent performance and lewdly exposing her person.  Despite the insistence of the club’s publicist that the whole debacle had been an orchestrated media stunt, the D.A. pursued the case and Lili hired renowned defense attorney Jerry Giesler.  Giesler had already successfully defended Charlie Chaplin, Errol Flynn, and gangster Bugsy Siegel, just to name a few.  He noted, of his tendency to take cases revolving around sex, “It’s because sex is not only one of the facts of life, it’s also – at least in my experience – one of the most prevalent bases of legal strife.”  Giesler insisted that Lili’s act was artistic and refined and requested that her jurors be made up of “people capable of judging such things on their artistic merit.”  Accusations against Lili included that her towel was see-through, which was refuted by examination of the towel in question, and that her dance involved a pelvic bump.  Captain Walker Hannon described this hip motion as “Mae West wiggles” and the short, rotund Hover, when asked to demonstrate a bump, shyly sent the courtroom into fits of laughter.  Captain Sutton testified that he had not seen either bumps or grinds and the jury soon acquitted Lili, after which she stated, “This is a real victory for the profession.”  Once again, the trial increased her fame and the Hollywood Report gossip column ranked her with Lana Turner and Ava Gardner in their Pucker-Up Poll, while an ad for Ciro’s touted, “See What Hollywood Saw! – Was the Jury Right?”

Lili, whom journalist Walter Winchell said outstripped even Gypsy Rose Lee, stated, “If I do demoralize an audience, as some people say, then I’m glad I do it.  People need a loosening up.  Most of the people in this country are hypocritical, too many put on a front of being shocked at certain kinds of behavior.  It’s a joke to think I could demoralize anyone with this little act.  If one has morals, then they can’t be taken away by me or anyone else.”  As the line goes in The Rocky Horror Picture Show, “God bless Lili St. Cyr!”