The Silver Slipper and the Infamous Evelyn West and Blaze Starr

The only icon that says Las Vegas more than a slot machine is a showgirl.  From can-can to canned music, Vegas seems to have always welcomed scantily clad women on its stages.  Some of the biggest busts in burlesque were popular touring sensations at the Silver Slipper in the mid-century.  One of the largest casinos on the Strip in its heyday, some favorites at this saloon were Tempest Storm, Evelyn West, and Blaze Starr.

Although there was little protest to the stripteasers’ Vegas presentations, both Blaze Starr and Evelyn West found themselves under the scrutiny of the law when performing elsewhere.  In Philadelphia Blaze Starr’s performance was brought up on an obscenity charge for her aggressively sexual panther crawl and Evelyn West was reportedly hauled to the big house at least a half dozen times in St. Louis. 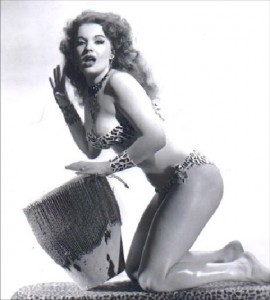 Billed as “The Hottest Blaze in Burlesque,” Blaze Starr was born in 1932, hit the road at the age of 15, leaving her Virginia home behind, and was performing burlesque in Baltimore by 16.  With her phenomenal figure and flaming red hair, Blaze quickly made a name for herself.  This hot-blooded mama can aptly be described as fierce, her acts known for their energy and daring.  Her most famous stage prop was the burning couch, a device that was both hot and humorous.  As Blaze graced the divan with her derriere and began to disrobe, the couch would start to smoke and seemingly set itself on fire!  The only person this act didn’t make her popular with was probably the fire marshall.  What really got her into trouble, though, was another little stunt involving a live panther.  The panther joined her onstage and helped her out of her clothes while searching for hidden snacks.  But problems didn’t arise from a protest by PETA or an act of animal violence.  No, the trouble all started when the panther passed away…and Blaze decicded to keep the routine, imitating the panther herself.  Although audiences were ready for her raw re-enaction of the panther’s prowl, police were not.  Perhaps they feared that Blaze would incite a sexual riot, so they arrested her for obscenity.  Just as a later accusation in New Orleans would be, the charges were thrown out.

Miss Starr is perhaps best known these days for her love affair with “the ungovernable governor,” Earl K. Long of Louisiana and the movie, Blaze, based off of her autobiography.  Previously pictured as the lead in 1962’s Blaze Starr Goes Nudist, Blaze may not have been an actual nudist, but Miss Evelyn West spent some time as a part of The American Sunbathing Assocation.  She advocated the health and happiness that nudism could bring to a person and was even a bridesmaid in a nude wedding once. 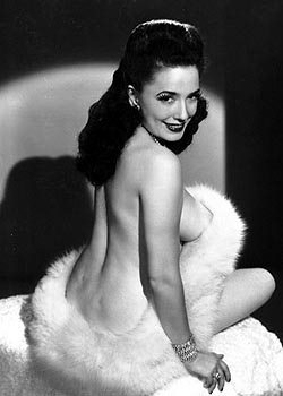 Known as “The Hubba-Hubba Girl,” Evelyn West was born in 1921 and has been credited with making burlesque ‘bust-conscious.’  She was so proud of her own pair that she had them insured for 50 big ones through the prestigious Lloyd’s of London.  She even attempted to legally change her name to Evelyn “$50,000 Treasure Chest” West.

Beginning in sideshow, Evelyn’s career really took off after World War II when she began performing a striptease at San Francisco’s President’s Club.  She appeared in the film A Night at the Follies in 1947, where she quipped, “I know you’re looking at my shoes,” and was an extra in a couple of earlier films, but burlesque was where she really made it big.  Despite her many run-ins with the St. Louis police department, Deputy Police Chief James Hacket gave her the compliment of calling her “the Babe Ruth of burlesque.”  Her most notorious prop, a dummy called Esky, modeled after Esquire magazine’s mascot, caused some to take offense.  They claimed that her act “excited men to lewd and vicious thoughts,” but as per usual, the judge in this case was hesitant to navigate the grey area between art and misconduct, and the charges were dropped.  Although she was taken in for indecent exposure several times, her bondsman, Bob Block, has stated that she was never held over night.

Miss West had no problem stirring up a little trouble, and publicity, wherever she went.  Evelyn was known to make disparaging comments about rival celebrities, even throwing a tomato at one, and threatening to sue others.  According to one source, her pin-up photos were banned by the US postal service for lewdness and a pricing scale that correlated directly to Miss West’s state of undress.

From starring at the Stardust and Silver Slipper to authoring articles such as “How I Feel about Sex” and “Are Strippers Immoral,” the buxom beauty definitely made her mark on burlesque.  Evelyn eventually retired to anonymity, though, and passed on in 2004.  Blaze Starr, however, continues to create art, selling her jewelry online at www.blazestarrsgems.com.  She also still enjoys playing the Cajun fiddle and the slot machines!