Dallas’ Blaze was just crowned Texas Performer, One to Watch (the Newcomer category) at Hot Rods and Heels. She sits down with us to talk motorcycles, Ziggy Stardust, costuming, and hair maintenance.

Q: Congrats on winning the Title of TX Burlesque Performer- One to Watch (Newcomer category)!  You seemed to create quite a stir in your first year; to what do you attribute your success?

Thank you! I’m very excited and honored to claim that as my first burlesque title! As far as what I attribute my success to I think a lot of factors came into play. I have an extensive dance background so that helped a lot. I have a great support network of talented friends that encouraged me to really push myself. I have a wonderfully supportive Husband who helps me with my music, watches my endless rehearsing & grudgingly puts up with all the glitter & rhinestones that litter my home.

I think above all though is my determination to really put on the best show I possibly can in the 4 minutes I’m on stage. I really wanted people to walk away from one of my performances saying ‘Wow, that was amazing!’ rather than ‘Aww, she’s new, I’m sure she’ll get better’ so I really though hard on each performance and the impression I was going to give the audience. After all, it is really all about them!

Q: I understand you have made all of your costumes yourself, and they are absolutely amazing! Do you have a background in costuming?

Thank you again! I do make most all of my own costumes but I have purchased various pieces from vendors in the past due to either time constraints or just coming across something perfect for what I was going for. I’ve been sewing my own costumes ever since I asked for a leather jacket for Christmas when I was 13 but got a sewing machine instead! I’ve taken a few courses on sewing & design but I am mostly self taught; a lot of experimentation lead up to where I am today!

Q: Your hair has become a signature, is it a custom color, and how hard is it to maintain?

If I had a nickel for every time someone asked me if I would tell them how to get their hair color the same as mine I would be living *quite* comfortably at this point! I do use products purchased from a regular beauty supply store but I do combine them to create what you see.  Thankfully my hair color is naturally light so I don’t have to use any bleach but it is a lot of upkeep; root touch up at least once a month (more if I have important shows) and color depositing shampoo every time I wash it. I’ve been a redhead for over 15 years now & I think I have *finally* figured it out!

Q: Of all of the new opportunities that have come your way recently, how do you decide which ones to pursue, and which to pass on?

I have more hobbies and interests than really any one person should have so I learned very quickly that I needed to have an up to date calendar with me at all times to first see if I have the time available. I keep in mind if I would have to create a new number for the event & if I have time to create, rehearse, costume & perfect it.  After that I take into consideration the cost of the show for me vs. the compensation I would be getting. Things like would I need a new costume? How far is the event for gas expenditures and if I would need to purchase a hotel for the evening.  If it’s a charity event is it something I would actually want to support? I try to remember that just because someone give me a chance to be onstage doesn’t always mean I need to be up there.

Q: What would be your top three tips for new gals trying to break into burlesque?

1) Figure out a starting point. Do you want to do classic style burlesque or some really edgy numbers? Is there a performer that really speaks to you with their shows & you want to create the same kind of art? You don’t necessarily have to do that style for the rest of your career but this will at least give you a starting point to seek out teachers or other performers that may help you get started.

2) Attend as many burlesque shows as you possibly can. not only will you see new & exciting performances & styles that you might not be aware of but you will also meet many of the producers & performers involved in shows in your area.  Talk to them about your interest in performing and they might be able to direct you to classes & workshops or troupes that could help.

3) Don’t ever put a performance piece onstage until it’s ready to be seen. Like I said earlier I never wanted people to think ‘oh, she’s just new at this’ due to a lackluster number. Really work hard on your presentation before it gets to the stage.  Practice in front of friends & family & get their feedback.  Get photos taken of you in your costume so you can see how it looks to other people. Record a practice if you can so you can see how everything looks in movement. Above all remember that you are performing for the audience and you need to make THEM happy rather than just satisfying your need to be in the spotlight. 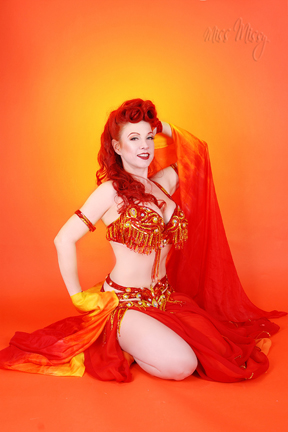 Q: You recently bought a motorcycle, tell us all about your new biker adventures.

I’m so excited about that! I completed my safety course, got my license and picked up my bike all in one day! I now own a 2007 Honda Shadow Spirit VT750DC; it’s all black and chrome with red pinstripe flames painted on the tank.  As soon as I saw it & sat on it I knew it was meant to be mine! I’m still working up to being as proficient as I need to be before heading out alone and safety is a big concern of mine but it’s been a blast so far!

Q: If you could have dinner with any five people, living or dead, who would they be and why?

1) John F. Kennedy – Being born & raised in Massachusetts the Kennedys have always been a fascination for me. My first really ‘book report’ was on JFK when I was in 4th grade.  One of the very first things I ever did in Texas was to go to Dealey Plaza; I still won’t drive over or even get near that ghastly ‘X’ there. I admire what he was trying to do and even though he had normal failings like every human being I think he was a great leader.

2) David Bowie – I remember the first time I heard ‘Ziggy Startdust’ & I came home to tell my mother how much I loved it.  She told me ‘You wouldn’t like him if you knew what he was like in the 70’s’ so of course I immediately went & looked it up & was downright smitten! The movie ‘Labyrinth’ only strengthened my fondness of him & Sarah’s ballgown from that movie turned out to be the first ‘big’ costume I ever made.  Would love to be able to just sit and eat my dinner while listening to him talk and looking at him across the table!

3) Gary Numan – Another British rocker that I am hopelessly smitten with! I met him and his lovely wife Gemma years ago at a show in Boston; I was dressed like Joseph Michael Linsner’s character ‘Dawn’ who Gary had done a ‘soundtrack to read by’ for recently. He actually asked to meet me! I love his music and they were both such lovely people I’d really jump at the chance for a dinner with them.

4) Baz Lurhman – The creator of my favorite movie ever; ‘Moulin Rouge’.  I’ve admired many of his films but MR struck me so deeply from the very first time I saw it I doubt there will ever be another movie able to do the same.  I’ve recreated many of Satine’s costumes from it (in frightening detail sometime & please don’t ask me how much I’ve spent over the years on them!) and still cry every single time I watch the end of it. Both he and his wife Catherine Martin (the costume designer for MR) are such huge inspirations to me I would probably be just speechless the entire time!

5) My Dad – I’m very lucky to still have my father alive but I haven’t seen him in person since I got married in 2006. he’s always been such a big supporter of anything and everything I’ve wanted to do in my life even if he didn’t so much approve of what it was.  As long as it made me happy that is all he cared about.  i still talk to him on the phone quite often but there is nothing like a hug in person from your Dad.

Q: What does the future hold for Blaze?

I’m not sure! Sometimes I get frustrated trying to think about what the future does hold for me as there are so many things I want to do & accomplish & I’ve never claimed patience as one of my virtues! Whatever I’ll be doing you can be sure it will include a lot of glitter & rhinestones though! 😉