After an amazing festival year in 2014, I was pretty unsure about how epic 2015 could be. I knew I wanted to try new things, go to new festivals, expand my burlesque repertoire, and maybe even tour a tad. Most importantly, I knew I wanted to kick off 2015 with a BANG! When I applied for the Southwest Burlesque Showcase in Albuquerque, New Mexico, I had no idea what I was getting into. Let’s just say, I’m SO glad I did…

For those of you who haven’t traveled with me, you need to know that I’m a horrible plane pal. It takes at least a shot and a Miller Lite to get me across the jet bridge. I guzzled my courage down at the local BW3’s and made my way on board. It was a pleasant flight. I sat next to a lovely gent who is an aspiring geologist and devout Christian (digest that for a second) and thus ride went rather smooth.

Upon my arrival, I was greeted by the most familiar and happiest of faces ever, Paco Fish and his smile from ear to ear. He was joined by his Tucson roommate and fellow performer, Rambo Reza, and a jovial little hitchhiker known as Paris Original. We arrived at Hotel Blue, checked in under the pseudonym Red Colors, watched the Albuquerque sunset, and got ready for the kickoff party at The Launch Pad.

This was the first time I have experienced the illustrious Dr Lucky. I’ve never been so proud to yell “cunt” in a crowded room in my life (which stands for Cunning Uninhibited Nasty Troublemakers for those that don’t know). Wow, what a woman. The festival was kicked off by La Bamboo Vixen in a samba-lesque tribute which was followed by many lovely performances including my suite-mate Rambo. The night got really turned up when Lola Brown took the stage. This powerhouse of a woman reminds me of one of my all-time Texas favorites, Chola Magnolia, with her every move. She commanded attention from the audience with her tequila inspired routine. I have nothing but respect for a woman who drinks 5 shots of tequila on stage and keeps herself upright. This lead into a fabulously costumed Baron Samedi care of Evangeline Cain. She is the Creole soul of ABQ and she holds it down with glory.

Later in the evening, after watching two audience men do the most painfully awkward strip tease followed by a shaming (yet so appropriate) beer chugging without the use of hands, it was time to bring out the bombshells. The bar for the rest of the fest was set with Zoe Ziegfeld of New York. I haven’t seen a woman light up a stage like that in a long time. Her act was sweet and elegant, at least until her assels came out and Dr Lucky demanded an encore. (That’s the only way to do it folks.) The night closed with two of the hottest messes I have ever seen. One from festival co-producer Holly Rebelle who had to bust out her Paint It Black (literally) routine on the fly because of some last minute cancellations (way to hold it down, bish!!) and General Blackery and Rex Starchild. I will not detail this performance. Let’s just say if you get invited to this picnic, YOU MUST GO but please bring an umbrella, a poncho, your own plastic ware, and a smile.

After that, I literally humped Zoe’s wig off and went to bed.

What could possibly kick off day two of a festival than breaking into the Southwest Popular American Culture Associations annual conference with Paco Fish and Zoe Ziegfeld to hear Dr Lucky speak on a paper? Well… nothing. Her speech, as well as the other scholars in the room, challenged our beliefs on sensationalism vs realism, gender roles, hyperfemininity, and the challenges women face to reclaim their sexuality, particularly in burlesque. All of which happened at 9:45 in the morning on a crappy cup of hotel coffee. It was real talk. And I needed it.

Later, Paco and I had a delicious lunch at an Albuquerque staple, Flying Star, before going back to the room to relax and let him prepare for his big show. Along the way, I was introduced to the delightful and joyously infectious Fanny Spankings with whom we dubbed our sixth floor string of rooms Stripper’s Row. Paco made his way to the venue while I was joined by DomestiKate and Allexa from Amarillo (yes, they have burlesque in Amarillo, TX) and we made our way to the historic Kimo Theater.

Devin D and Fanny made sure the audience was properly prepped as I made my way to the balcony to sit with a slew of burly virgins. The entire section was in awe when GiGi O’Lovely tore up the stage in her black boa. She was followed by even more powerhouse sexuality when Siren St Sin and high stepping Ariel Helvetica did their respective diddies. It was then that Paco Fish broke through. Many of the virgins around me had no idea how to feel while watching a man move so freely across the stage in such elegance. Paco’s Diamonds routine (or Aquaman as I call it) is truly a testament of human capability. When a clown such as he can bring a lady to tears with grace, then you have truly made it. Bravo!

I’m going to just stop right now and say this, Bunny Galore. If you don’t know, now you know. I kid you not, if you haven’t looked this video up, do yourself a favor. She owned everyone in that theater and she’s about to own you. First standing O of the festival. Anyway, after that, there was an abundance of burlesque beauty to behold from Spellbound Burlesque to Joy Va Voi. The evening was topped off with the Golden Glamazon, Sydni Devereaux. To this day, no one has moved with such grace across the stage in my eyes. I couldn’t have asked for a more beautiful evening.

At the hotel, I got to chat with Joy Va Voi and a bunch of the other gals. The night was capped with talk of Vikings and Joy’s home in France. After a number of bottles of champagne, it was time to put the strippers to bed and get ready for the big night. 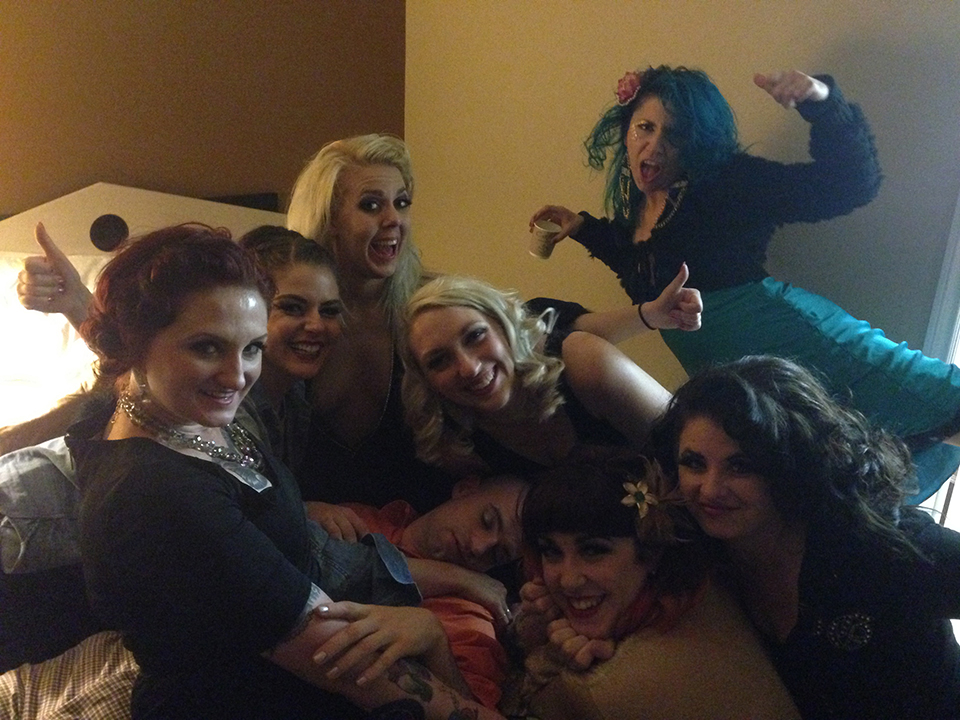 Oh hey there Valentine’s Day! Yes, I would love to perform at the beautiful Kimo Theater. But first, I’m going to need to make a pit stop at Trader Joe’s and Off Broadway. Guys and Gals, this is the only place to get big ass lashes in the city, just so ya know.

The venue was packed to the brim with couples and beautiful faces. It almost seemed as though the entire audience had changed from Friday. You know you’re doing it right when both nights sell out and your fabulous city has your back. Way to go SWBS; way to go. I had the pleasure of being able to watch the first half of the show on Saturday, and I’m so glad I got the chance! The show was a who’s who of the West in classic burlesque. The energy was already high when Aya Fontaine took the stage. I had no idea they made such elegant women in Vegas. She is a perfect example of true musicality. 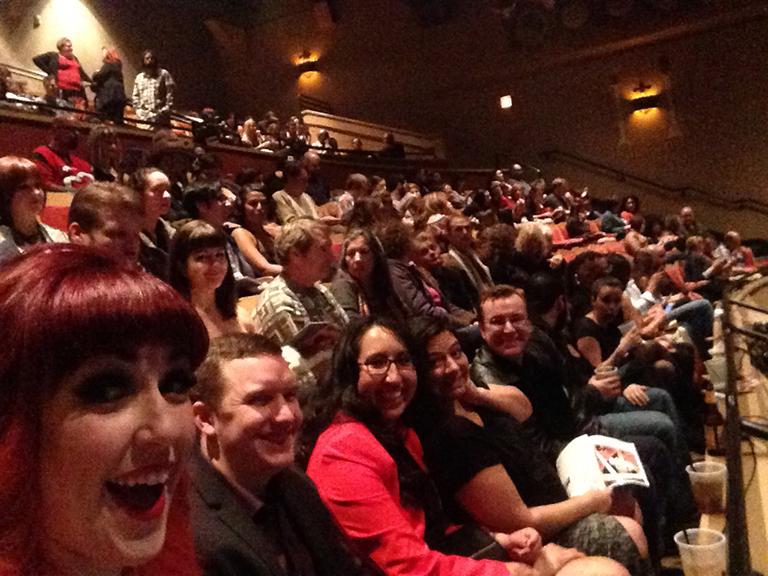 I was later wowed by the glorious and colorful performance by Joy Coy, a local favorite. Pink and orange, you can’t go wrong, and when you put a stunning long legged blonde beneath it, it’s a win for everyone. The act closed with Paris Original in a routine I hope to see again and again. The audience went from oo’s and ah’s to tears with every turn, leap, and strip.

The last act I was able to see before having to get ready was the by the indescribable Orchid Mei. There are a multitude of compliments I could give this routine, extravagant and radiant are the first two that come to mind. I cannot say I’ve ever seen Chinese dancing dragons on stage in burlesque. I’m sorry Khaleesi, Orchid is giving you a run for your money. And that was all the inspiration I needed to get ready to kick my own routine’s butt. I performed my beloved Vegas routine, equipped with giant feather mohawk by Violet Peacock and a slew of flowing purple fabric and beads. The Kimo Theater was once a performances hall for the great Sally Rand. I have absolutely no doubt that she left that stage blessed. I’ve never felt so good about a performance. 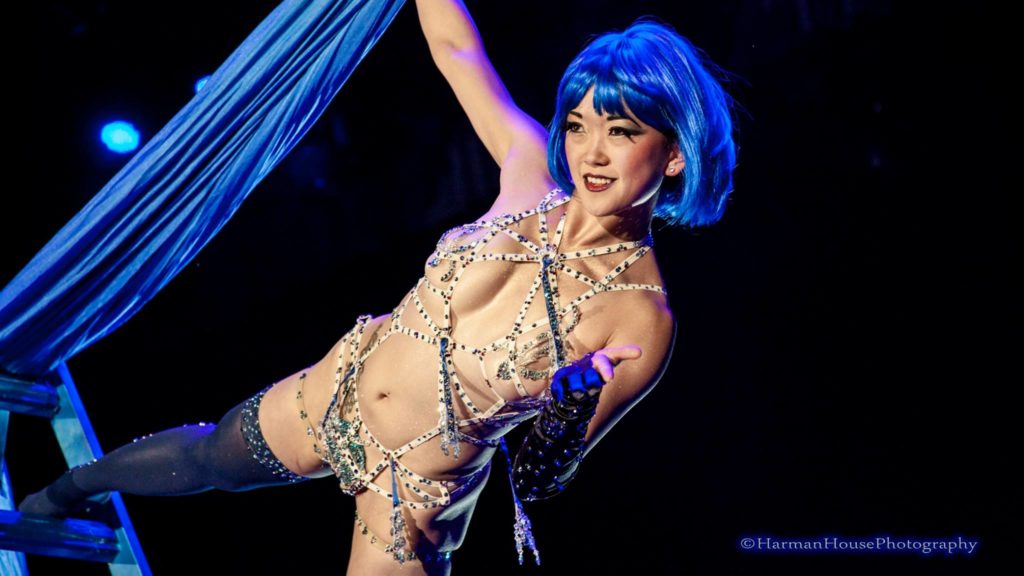 Immediately following was the moment we all had been waiting for. The Reigning Queen of Burlesque, Midnite Martini took to the stage in her award winning routine. I knew at BHoF 2014 that she would be queen the moment her music ended. It was clear as day. And now I had the opportunity to relive that moment again from the wings of the Kimo. She never ceases to amaze. It was perfect. It was perfect just as it was last summer.

The night ended with an after party at the dance club across the street followed by a small gathering on Stripper’s Row. I couldn’t be more grateful to be surrounded by such an amazing community of performers. When the excitement and adrenaline dissipates and you are surrounded by people you love and admire, you know you are doing it right. 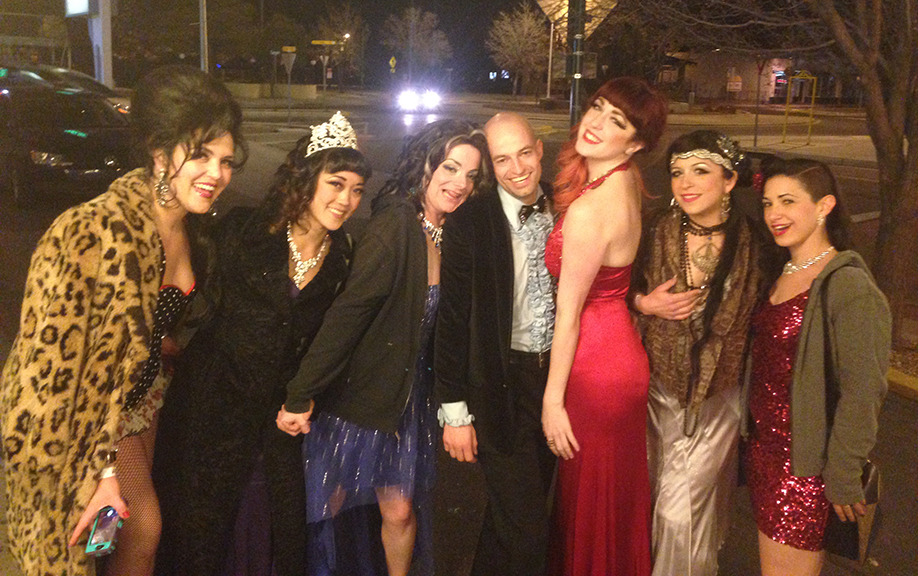 The next day Paco and I stopped by the brunch provided by our fabulous producers. Unfortunately, I had woke up late so we could only stay long enough for me to lick Midnight Martini’s face per Shoshana’s request. I then took to the skies in my drunken stupor and made it back to Houston safe and sound.

Just so you know SWBS, I’m coming for you next year with all the showbo action New Mexico can handle!!!