BurlyCon is thrilled to have you as a 2015 Guest of Honor! Your work with the Shim Sham Revue as musical director, bandleader and drummer for one of the first authentic 1950s-style burlesque revival shows in the nation is legendary.

How does it feel to be a musician with a place in modern burlesque history?

Thank you! I’m honored & ecstatic of the news to have been chosen. It’s nice to have had a hand in planting the seeds of something that has taken off and grown the way burlesque has over the years.

You went from drumming in a New York glam punk band The Throbs (a group played in heavy rotation on MTV’s “Headbanger’s Ball”) to becoming a Gene Krupa-style bandleader with a seven-piece jazz band and a burlesque revue at the Shim Sham club in New Orleans. How did that happen?!

I left New York and moved to New Orleans, August 1995. Not only was I going for a change of scenery, I was also looking to do something different and new musically.

Then in 1999, a friend of mine Morgan Higby Night took over what was once the Toulouse Theater in the French Quarter, and renamed it The Shim Sham Club in homage to a club on Bourbon Street that Louis Prima’s brother, Leon Prima had owned in the 1930’s. It was going to be a cool, vintage, New Orleans-style club with a live weekly burlesque show. He asked if I would be interested in being the drummer & bandleader for the show he was putting together, and of course I jumped at the opportunity. And so began my life in burlesque.

True. I first met and started working with Little Richard in 1990 with The Throbs. In the 1950s, Richard recorded his early hits in New Orleans. When I mentioned to him that I’ve never spent any time in New Orleans he told me I needed to go check out the scene down there, because those cats can really play. I did go and check it out, and he was right. New Orleans is where I got my musical education from.

The Shim Sham Revue attempted to recreate the burlesque of the 1950s in a very authentic way, bringing in legends like Kitty West and Wild Cherry to teach your dancers old school bumps and grinds. What was it like working with the legends?

Amazing! We were fortunate enough to still have them living around the New Orleans area and willing to help us out with our show. In 1999, when we first started out, their knowledge of how a real burlesque show should be was a big help to our success in keeping the shows authentic.

Kitty was there with us from the beginning keeping watch, teaching the dancers how to walk, how to move. Kitty and I had discussions about what music she had danced to. She put me in touch with some of her former musicians. I had the honor of recording, for the first time, her signature theme song “Oyster Girl” for my album and helped re-create Kitty’s “Evangeline the Oyster Girl” number. And with Wild Cherry, we re-created her “Treasure of the Orient” number that she performed on Bourbon Street in the 1960s. We did some pretty cool stuff together with them. I feel very lucky to have known and worked with those women.

What will you be teaching at BurlyCon this year?

My class is titled “Risqué Rhythms – Working With Music in Burlesque”. I’ll be sharing pointers and advice for dancing and working with live music, as well as working with pre-recorded music for shows and acts. I’m going to discuss “owning” your act with original music, choosing the right music for your performance, and how song keys and tempos will affect your act and audience and a lot more. Plus, I’ll be talking tips and lessons passed on to me from the striptease queens, comedians, and musicians from the Golden Age of Burlesque.

Legends like Kitty West have been quoted as saying that, historically, burlesque “died” when they got rid of the bands. How so?

The invention of the jukebox came along and that killed live music in the burlesque business. It went from orchestras and bands to jukeboxes! It ended up becoming guys just putting nickels in the jukebox waiting for the next girl to come out and dance and strip. In Kitty’s eyes, it cheapened the art of burlesque not having live music to dance to.

What makes burlesque with live music relevant today? Why don’t we see it more often?

I think that should be a question for the producers of today’s burlesque shows. Its definitely more work and much harder with a live band than to just have canned music.

Plus there is the extra cost and expense of having a live band. I do think it comes down to money to a degree. How much money is the show making at the door? Could you hire a band and still make money on your show? What are the chances of seeing a live band at a $5 burlesque show today? But yes, knowing the history of burlesque, I’m surprised more shows and events that are billing themselves as burlesque shows don’t use live music more often. Burlesque is more than just the striptease.

You’ve worked live with Dita Von Teese as well as on music for her shows, including “Strip! Strip! Hooray.” What was your collaboration process like?

I’ve worked live with Dita a number of times in New Orleans with the Shim Sham Revue. Each time it was fun, easy & simple. She became a fan of my album & knew the music. She would tell me ahead of time what songs she wanted to dance to and show up the day of the performance and with no rehearsal, she would just nail it every time. At some point Dita wanted her own original music or at least her own original versions of songs. She wanted music no one else was using. She had someone in L.A. work on music for her and then brought me in to give it a bit more of a burlesque feel before it was mixed.

Also recently, in her Strip! Strip! Hooray shows, one of Dita’s numbers includes a remix of my song “Tombstones Blues.”

No, I don’t think that it’s necessary for a performer to pay me a fee or to get my permission if you want to use my music for your act. I look at it as a form of flattery. There’s a lot of great music out there and you choose my music…Thank you. But of course there are exceptions to the rule. For example, if you’re using my music to sell a product or for promotion or if some place like the Crazy Horse in Paris was using my music for their shows, well then we should talk. 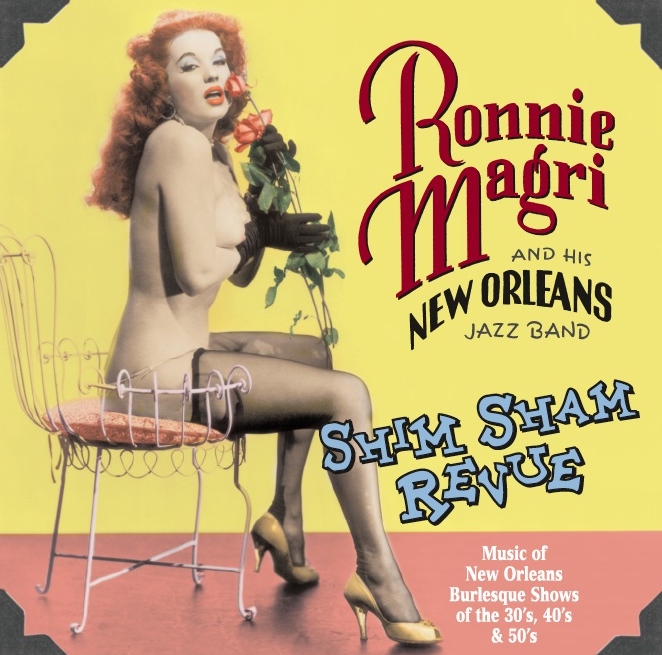 Your 2002 album “Shim Sham Revue: The Music of New Orleans Burlesque Shows of the 30s, 40s, and 50s” is a stripper classic. It’s one of the worldwide burlesque community’s most beloved recordings. So we’re dying to know, will there ever be another Shim Sham Revue album?

Yes, I know I’ve said this before, but I feel like I’m getting closer to doing a follow-up to my “Shim Sham Revue” album. The charts and music are ready to go. There’s pressure because the first one did so well, but I have some good music for this new one that I think it could be even better than the first album.